Bystanders Try to Help More Often Than They Get Credit For

Researchers found that in 90 percent of cases, at least one person observing a conflict intervened. 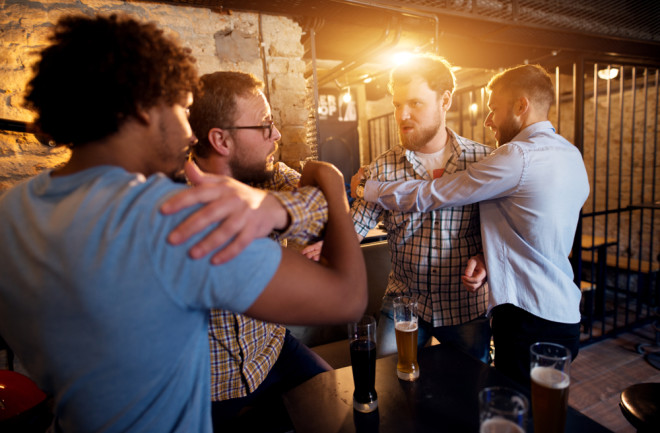 If you see someone in need, would you help them out even if you might get hurt in the process?

Psychology experiments have often shown that people are unlikely to help others in need when another person is close by. This dismal human reaction is called the “bystander effect,” named for the people who stand by and do nothing. But most of the research on the bystander effect comes from carefully controlled lab settings, not from the real world. And now new research suggests the story is a little different, and a little more hopeful, in real-world scenarios.

In a study published Wednesday in the journal American Psychologist, researchers found that in 90 percent of the cases they examined, at least one person observing a conflict intervened.

Richard Philpot is a social psychologist at Lancaster University in England and the University of Copenhagen. He and an international team of collaborators analyzed security camera videos in inner-city areas in three different countries. They pulled out 219 video clips where at least two people engaged in a conflict, ranging from verbal squabbles to more extreme instances involving a machete or knife.

Kristen Renwick Monroe is a political scientist from University of California, Irvine, who was not involved in this work. Her own research also tries to understand why some people intervene and some do not. She says these latest findings are something psychology as a “discipline does need to be aware of.”

Other psychology experiments have shown that context matters for whether or not someone will intervene. But this new research also shows geographical location might not be as big a part of that context as previously thought. Across the three cities – Cape Town, South Africa; Lancaster, England and Amsterdam, Netherlands – bystanders were no more likely to intervene in a contentious situation in one city over another.

Philpot was surprised at the consistency across countries. “We thought, in South Africa, people would be more nervous,” he says. They expected the area would be perceived as more dangerous. He adds that humans might have a “natural inclination” to help others and that the degree of danger might not matter.

Victoria Banyard, a Rutgers University expert on bullying, dating and sexual violence, believes shifting the focus of the bystander effect from why people don’t help to why people are more likely to intervene is “helpful and can open up new questions and insights.”

In future work, Philpot plans to analyze whether the gender of the bystander or the presence of a weapon makes people more or less likely to intervene. When asked whether other countries might have the same rate of intervention, he said “it would be difficult to tell” because different countries have different social norms about what counts as an acceptable level of violence.

Findings from this work will inform programs that train people who may have previously stood by to feel more confident and capable of intervening. Banyard says such programs “try to create a new social norm about how we see our communities.” She likes to use the term “actionist” to describe people who intervene. “If a community perceives being an actionist as a positive thing, then they may be more likely to intervene,” she says.