Blood-Sucking Bugs Are Smart at Night, Dumb by Day 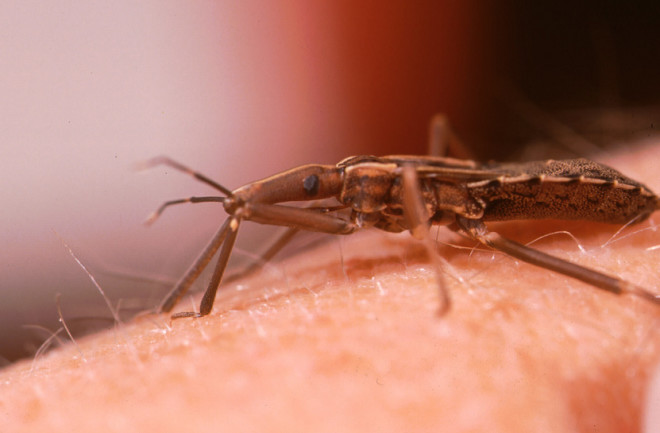 Any college student can tell you that overstudying is a waste of energy. When your resources are limited, you should learn the material that’s going to be on the test and ignore everything else. Certain blood-sucking bugs use the same strategy—unfortunately for the humans who catch diseases from them.

Kissing bugs live all around the Americas and drink the blood of other animals, including humans. They prefer to bite their hosts on the face—hence “kissing.” The species that live in the warmest areas, including Latin America and the southern United States, can carry the parasite that causes Chagas disease. This parasite can stay with a human for life and cause heart failure or other serious complications. (It doesn’t wriggle into your body while the bug is sucking your blood, but afterward, when the bug poops on your face.)

Understanding how kissing bugs operate, then, could be important for disease control. The insects have to learn and remember where to find their hosts and how to snack on them without getting smashed. How do those little brains work?

Clément Vinauger and Claudio R. Lazzari, of the Université François Rabelais in France, wanted to know whether kissing bugs learn differently at different times of day. Like humans, insects have sophisticated internal clocks that keep them running on a 24-hour (or “circadian”) cycle. By day, kissing bugs lie low; at night they come out of their shelters to feed.

For their experiments, Vinauger and Lazzari chose the kissing bug species Rhodnius prolixus. This insect is an obliging lab animal. It also has a reflex that’s easy to study: when the bug gets close to a nice, warm object—say, around human body temperature—it stretches out its proboscis to get ready for sucking.

The researchers trained kissing bugs to suppress this reflex. First, they put a bug near a heating element at an appetizing temperature. The bugs reached out with their proboscises to touch it. Then the heating element was suddenly cranked up high, making the insects jerk back their mouthparts (“Yowch!”).

In a training session, researchers counted how many bad experiences it took before the kissing bugs learned not to touch the hot object at all. Later, they ran the bugs through the same procedure as a test. If the bugs remembered what they’d learned before, they should stop touching the heating element quickly—after fewer tries than before. But if they’d learned nothing, they would poke the scorching object just as many times as they did during training.

When the bugs were trained during the day and tested 24 hours later, they acted like they’d learned nothing. But when they were trained at night, the lesson stuck. These bugs touched the hot object fewer times in the second experiment.

Are kissing bugs worse learners when the sun is up, or just worse at recalling what they’ve already learned? To find out, the scientists trained bugs either by day or night, then tested them just 12 hours later. Bugs trained at night had no trouble recalling their lesson by day. But bugs trained during daytime hours still performed badly when tested at night. So recall wasn’t the problem—it seemed kissing bugs just weren’t making memories during the day.

Finally, the researchers repeated the experiment with the lights off. They trained and tested bugs at the same times as before, but in the lab it always looked like night. Still, the bugs performed the same. If their training happened during a time that should have been day, they didn’t learn. If they were trained 12 hours later, at “night,” they learned just fine.

This showed that not only do the insects learn best at night, but the process is driven by the powerful internal clock that keeps ticking even when the sun disappears. (If you were kept in a dark room, you, too, would keep operating on a roughly 24-hour cycle, at least at first.) Kissing bugs aren’t the only insects that seem to have a circadian rhythm to their learning. Bees, cockroaches, and fruit flies have all shown scientists that their ability to make memories depends on whether it’s day or night.

What’s the point of only using your smarts during half the day? For a bloodsucker, learning and remembering information about its hosts will help keep it alive, the authors write. But it’s even better to learn that information in context. The kissing bug feeds only at night, so information gleaned about its hosts during the day is irrelevant.

Since learning new things takes energy, the kissing bug saves up its brainpower for the circumstances that are most important for its survival: nighttime, when you (and your tasty face) are lying in bed.