Scientists told study participants about a ghost in the lab; then they switched off the lights. The research is part of a larger body of work that aims to disentangle the link between our beliefs and behavior. 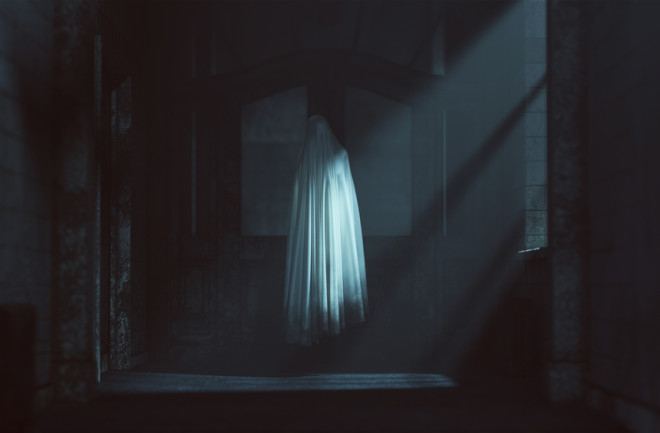 Are people who believe in the afterlife more likely to react to a supernatural event — say, the sudden appearance of a ghostly apparition — than those who say they don’t? Psychologist Jesse Bering and his colleagues at the University of Otago tested this very question, according to a recent study. And in their attempts to unravel the connection between our beliefs in the afterlife and behavior regarding the supernatural, the scientists weren't afraid to take a spookily creative approach.

The Ghost in the Lab

After being recruited for an apparent "mindfulness" task, one hundred volunteers were asked a series of questions evaluating their belief in the afterlife, their religious identity, and their belief in God. They then listened to a popular 9-minute mindfulness recording in a small, private, closed-door room. In the target condition of the study, participants were casually told that a janitor had recently passed away in that room, and that "one of the PHD students swears they saw a ghost in the room."

After listening to the mindfulness recording, volunteers were asked to remain in the room for 6-minutes and to visualize a problem they were facing at the time, applying the meditation techniques they had heard in the recording. Three minutes into the exercise, the experimenter used a bluetooth kit to remotely turn the light off in the room for exactly seven seconds, plunging the small room into complete darkness.

The researchers collected data on the participants' heart rate variability and skin conductance, a sign of physiological or psychological arousal. And regardless of whether they were self-described "believers" or "disbelievers" in the afterlife, participants in the "ghost" condition experienced similar levels of change in heart rate and skin conductance, responding physiologically "as if" they believed the event was due to a ghost. This was in contrast to those in the control condition, who weren’t told anything about a recent death or ghost sighting in the room. Perhaps somewhat understandably, these participants showed significantly less distress in response to the light unexpectedly turning off.

The findings suggest that people’s explicit, or spoken, beliefs don’t exactly fall in line with their behavior — believers and disbelievers alike showed strong physiological responses to a potential, albeit artificial, supernatural event. In other words, it doesn’t matter if you say you believe in the afterlife; your body responds as if it does.

This study is part of a wider body of research that has found discrepancies in people’s explicit beliefs regarding supernatural phenomena and ideas, and their behavior in relation to those beliefs. One particularly well-known study observed people’s reluctance to sell their soul for cash to an experimenter, even though they had previously expressed their belief that souls didn’t exist. This was the case even if they were told the sales contract was not legally binding and that it would be shredded following the experiment.

Another experiment showed that atheists became just as physiologically distressed as believers when they dared God to do terrible things to their friends and family. And in a study on afterlife beliefs, extinctivists — people who believe that consciousness is completely snuffed out after death — would sometimes still ascribe psychological capacities to people who had died, such as them "knowing" that they were dead.

A common theory for these findings is that our evolved cognitive architecture biases us to think in supernatural terms. This thinking might lead us to envision that our self survives biological death, see patterns in ambiguous stimuli, observe intentional agency where none exists, and think that events happen "for a reason."

What This Tells Us About Belief and Behavior

Cognitive scientists generally categorize beliefs as stable mental representations of the world that relate to our goals and personal identity. This isn’t far from folk understandings of belief, where they exist as independent mental states (separate from attitudes or feelings.) Through this lens, beliefs are thought to causally influence our behavior, since it often feels as though we consult our beliefs before we act in the world.

A popular way of making sense of these potentially confusing processes is to create a distinction between explicit and implicit cognition. Implicit cognition refers to intuitive, spontaneous, and unconscious mechanisms, where we often act without much consideration. In other words, we go with our "gut" feeling. Whereas explicit cognition, refers to analytic, reflective, reasoned, conscious mechanisms, where we turn to our rational self before we make a decision. Naturally, we like to think that most of our actions follow from this more measured cognitive process. But the reaction of participants in studies like those described above suggest an exceedingly high proportion of our behavior is determined by our gut, not our rational mind.

A vast array of factors can affect how implicit cognition may manifest in any given situation. It could be habitualized behavior that we have developed through our environmental conditioning, or it could even be responses that have been hardwired into our nervous system through evolutionary pressures our ancestors faced millennia ago. Regardless, we as individuals have very little say in how we actually react in these situations.

It might be the case that our behavior really tells us nothing about our beliefs. Behavior, more often than not, is simply a set of responses to certain stimuli, and often these responses are in contradiction with our explicit beliefs. For example, someone in a skyscraper might start to feel nauseous, nervous, and get wobbly knees when on a balcony or close to a high window. But they may also wholeheartedly believe they are safe and have full confidence in the engineers who constructed the building. Such cases, theorists argue, are examples of sensory stimuli activating concept patterns, including behaviors, beliefs, attitudes and emotion. In short, people don’t need to believe in ghosts to feel fear when one may be present; they only need to have associated ghosts with the concept of fear.

Another theory suggests that there is a general association between our beliefs and behavior. While our intuitions might say that our beliefs cause our behavior, this doesn’t always have to be the case. Researchers have traditionally seen behavior, beliefs, and emotion as three components of a single construct, where all three indirectly affect one another through an individual's motivation for consistency. In situations where behavior and belief contradict one another, an individual is likely to experience some psychological discomfort, which can prompt a reassessment of those beliefs.

A third theory says that behavior is belief. According to "embodiment" theories, the question of whether belief informs behavior is meaningless; behavior is not just a component of a holistic construct, it is the very means by which belief and emotions are represented. This reasoning suggests that disbelievers in the ghost study are not really disbelievers at all. Instead, their reactions to the "supernatural" event inform their belief that ghosts are real, as opposed to their beliefs preceding their behavior.

As of yet, there's no conclusive evidence to suggest which one of these accounts come closest to the truth. But studies like these have the potential to point researchers in the right direction. So, if you're adamant that you don't believe in ghosts but still find yourself yelping in fright at that eerie shadow in the corner, you might want to reconsider how steadfast those beliefs are in the first place.