A Personal Glimpse at Living With Early-Onset Alzheimer’s Disease

Two people share their stories of confusion and loss as well as helpful tips on how to navigate the world after an unexpected dementia diagnosis. 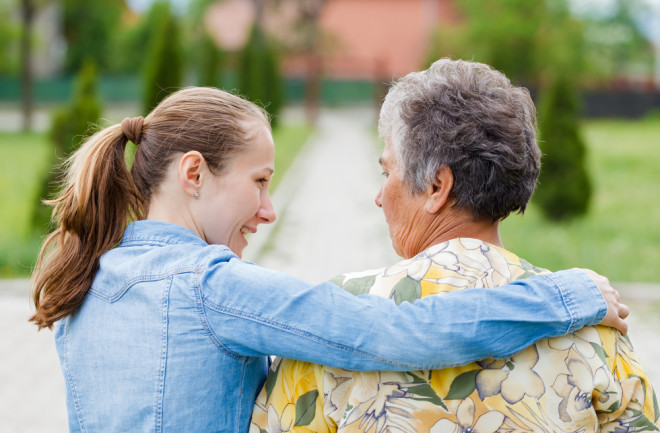 This story is the third in a three-part series about early-onset Alzheimer's disease. Read part 1 here and part 2 here.

Anitra Mostacero was an over-achiever. She joined the Air Force at the age of 19 and rose the ranks to become a Senior Master Sergeant. Along the way, she earned a bachelor’s degree, an MBA and several certifications.

But at the age of 42, she found herself sitting in her car, wondering how to turn it on. “I remember being very confused and thinking, ‘what am I doing here? How do I do it?’ ” says Mostacero, now 46. “That’s when it really dawned on me that I’m having moments of lapsing memory.”

Mostacero would eventually learn that she had early-onset Alzheimer’s disease, which affects between 5 and 10 percent of all Alzheimer’s patients. Early-onset is typically defined as showing symptoms before the age of 60. For young patients like Mostacero, early-onset is a devastating diagnosis that happens in the prime of their lives.

Before her diagnosis, Mostacero tried to navigate around her lapsing memory. At work, she created binders that reminded her how to do different tasks. She sometimes missed meetings, and she made mistakes that both her commanding officers and subordinates quietly covered for her.

She had other concerning symptoms. Sometimes she could hear people talking in her house, even though she was alone and her dog wasn’t alarmed. When outside, she saw birds aggressively flying towards her head. The swooping birds felt real, but others confirmed they didn’t see anything. There was nothing there.

Mostacero's primary care physician referred her to a mental health specialist who diagnosed her with schizoaffective disorder. Medication helped remedy her hallucinations, but it didn’t solve her problems with speech and executive functioning. She was referred to an endocrinologist, a rheumatologist and a sleep specialist. The doctors attributed her symptoms to work-related stress and depression.

Mostacero eventually saw a neurologist who thought she might have Parkinson’s disease and he ordered a positron emission tomography (PET) scan. The scan showed Mostacero had Alzheimer’s disease. She was surprised, and although she noticed her neurologist seemed very sad when he gave her the news, she says she didn’t quite process what the diagnosis meant. “I thought it was something for old people,” she says.

After joining several support groups, Mostacero saw people in advanced states of cognitive decline. “That’s when it hit me that I have something that is a terminal disease. That’s when I realized why he was so sad for me when he told me,” she says.

Mostacero’s neurologist told her to expect five to eight good years before her cognitive decline. The news was devastating.

“The first year of my diagnosis, I went through a heavy depression, very much mourning the future I felt was ruined,” she says.

Prior to her diagnosis, she planned to retire from the Air Force. She wanted to become a prison minister. She realized she would never achieve that goal. Mostacero also struggled with adapting to the new version of herself. She felt angry with herself when she failed to remember something or couldn’t locate a missing object. She says she had to learn how to live with the disease, and she began making major life changes.

She retired from the Air Force and moved from Texas to Idaho to be closer to her adult son, who is newly married and expecting a baby with his wife. With her move, Mostacero intentionally decluttered and downsized. She says that having a smaller, neater space is helpful for finding objects that she knows she will misplace on a daily basis.  “The less things you have, the less places you have to lose things,” she says.

Mostacero also became an advocate with the Alzheimer’s Association and she sits on their advisory board. She also serves as a mentor for newly diagnosed young people. She recently connected with a young mother in her 30s who was diagnosed with Alzheimer’s disease. Mostacero advised her to use technology to help her manage.

“Use all the technology and tools that you can, write everything down. You can’t trust your own memory. Use your calendar. Get two day planners. Use your phone. Use Alexa, use Siri, use your GPS if you are still driving,” Mostacero says. “Use all the resources and tools at your disposal.”

She keeps detailed notes of her days, and on some days, it is the only way she can remember what she did. When asked if she would likely remember being interviewed for this article in a few weeks’ time, she said her short-term memory was “spotty” and that she might not. If she needed a reminder, she says she would check her notes or her sent email folder. “I have a lot of tools to bridge the gap when my memory fails,” she says.

Doreen Monks was an advanced nurse practitioner who oversaw a stroke program at a New Jersey medical center. In her late 50s, she began struggling with administrative tasks. Her program, for example, was participating in a clinical trial and received a check for each enrolled participant.  One time, Monks wondered why the check was late. She asked an administrator to follow up with the study leaders, and they said the check had already been cashed — with Monks’ signature on the back.

“To this day, I have no memory of doing that,” Monks says.

She also couldn’t remember how many seconds were in a minute, and on which finger she should put her Claddagh ring, an item she had worn for almost three decades. A colleague eventually told Monks that she had noticed a cognitive decline and urged her to seek help. She was diagnosed with early-onset Alzheimer’s disease at the age of 62. “It’s amazing. Your world just stops. Everything you thought would happen in the future just ends,” Monks says.

Monks resigned from her job and went on disability. She told people she was retiring, which she now regrets. “I realized, I didn’t do anything bad. I didn’t get arrested for smuggling drugs. I just have a disease. It’s like other diseases like hypertension, it’s just not able to be managed,” she says.

Monks urges other people with Alzheimer’s and dementia to not feel ashamed. She says it’s important to tell the people in your life and build a support network. “Get your affairs in order. Get rid of all the angst of your life,” she says.

Monks arranged her living will, medical power of attorney and power of attorney. She arranges assistance for getting bills paid each month so that she doesn’t risk forgetting to do so herself.

Now at the age of 68, Monks says that she knows she has a “finite time” before experiencing further cognitive decline. She wants to use her time to educate others about Alzheimer’s and enjoy her life. “I tell everyone I don’t live with Alzheimer’s disease; Alzheimer’s disease lives with me. I’m not happy about it, but it’s coming along for the ride,” she says.