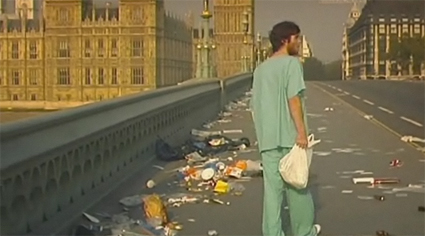 With buzz already building for The Road, a post-apocalyptic movie starring Viggo Mortensen set to come out sometime in 2009, Science Not Fiction decided to take at look at some of our favorite after-the-end-of-the-world scenarios. I excluded the various incarnations of War of Worlds because the book is basically an extended flashback from the safety of a rebuilt future, and the movies are apocalyptic rather than post-apocalyptic. Similarly Independence Day and Deep Impact are about averting armageddon. Twelve Monkeys and Oryx and Crake have post-apocalyptic scenes, but the back bone of their narrative is firmly in the pre-apocalyptic world--the selections below are all about life in the no-holds-barred aftermath. So in chronological order:

ETA *(Or not, there's an alternative explanation for the precipitating events that force the boys' original evacuation, see the comments below. But it still stands as a microcosm of life after global civilizational collapse)