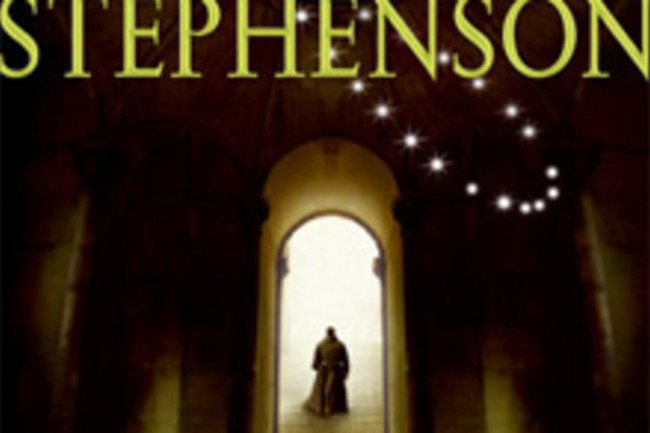 Okay, here's the one thing that some fans of Neal Stephenson will want to know: yes, it has a 'proper' ending. (Although Stephenson defends his authorial choices vigorously, a criticism leveled at some of his books by some readers is that they don't end, so much as just stop.) While there are still some interesting questions left by the end of Anathem, the characters do see resolution to their stories. (Also, the hockey jerseys now make perfect sense.) So, that settled, what's the beginning and middle of the book like? Awesome. Despite its length at 960 pages, the fast pacing of the book is reminiscent of Stephenson's earlier, shorter, Snow Crash and The Diamond Age. However, he also takes the time and room to delve into subjects ranging from orbital mechanics to Plato's Theory of Forms. The book revolves around the adventures of a young scholar called Erasmas, who has lived most of his life within the confines of a millennia-old order mostly devoted to theoretical research. When an enigmatic and unexpected arrival settles into orbit around his world, Erasmas' life is turned upside down. The book's release is well timed, coinciding with the activation of the big daddy of particle accelerators, the Large Hadron Collider. The Large Hadron Collider is part of a quest to understand just how arbitrary are the laws of physics--a question that becomes significant within Anathem. Our current best theory of fundamental physics, the Standard Model, explains much behavior--such as how the atoms of carbon that make up much of your body were formed, or how molecules interact chemically--in terms of a relatively small number of forces and particles. Using the standard model, you can explain why takes 13.6 electron volts to ionize a hydrogen atom (that is, the amount of energy required to completely remove the single electron that orbits the nucleus of a hydrogen atom), and not, say, 12.8 electron volts, or 114.4 electron volts. Ionization energies are critically important to whole swathes of chemistry and physics, and if the ionization energy was different, we'd live in a different universe--or wouldn't live at all, if the different laws of chemistry were incompatible with the evolution of life. The point is that many very important numbers that scientists routinely plug into their calculations are explainable and predictable in terms of the Standard Model, meaning that the mathematical logic of the Standard Model compels those numbers to be their specific values and no others, in much the same way that if you fix the length of two sides of a right-angle triangle, the length of the third side is also automatically fixed, and can be calculated from the Pythagoras Theorem. (In Anathem it's is possible to produce so-called newmatter, which is made from atoms that have been created under the auspices of slightly tweaked physical laws and so have properties different from that of regular matter because they have different ionization energies and so on.) However, there are some numbers which, even with the Standard Model, can not be explained in terms of other numbers or the internal logic of the Standard Model. These are known as the Parameters or Constants of the Standard Model and include things like the mass of the electron. These parameters must each be measured experimentally and together with the mathematical framework of the Standard Model, define the laws of particle physics as we know them. What physicists at the LHC and other places are trying to do is to put the Standard Model through the wringer, testing it at higher and higher energies in the hopes of seeing some clues to a simpler structure that may underlie the Standard Model, just as the Standard Model lies beneath the complicated rules of chemistry. If it exists, this structure may show us that some Constants are constrained just as tightly as the ionization energy of hydrogen--or it may show us that these Constants are not a logical consequence of deeper laws of physics and mathematics, but arbitrarily emerged by accident during the big bang. In other words, is the universe they way it is because no other way is possible, or are the laws of physics just an accident of the history of the universe? If we went back in time and reran the big bang, would we be as likely to see a radically different universe emerge as our own? Stephenson deserves credit for his trademark skill of putting ideas as big as this one into a book that's also a rattling good read.