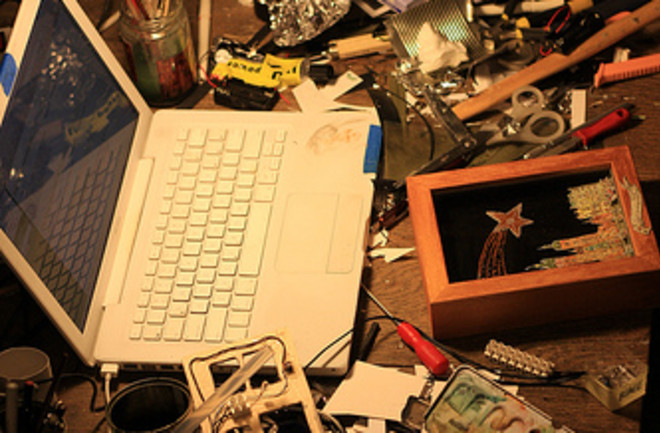 Photo: flickr/Madzia BryllThe three experiments presented in this paper bring up some really interesting ideas. Each involved exposing participants to tidy or messy environments (for examples, see Fig. 2 below). In the first experiment, the participants in the tidy room chose healthier snacks and gave more to charity than those stuck in a messy room. However, if you are a slob, don't despair: in the second experiment, the scientists tested whether chaotic environments promote innovation. And yes, the participants in the untidy rooms were better at coming up with "creative" uses for ping pong balls (sadly this list is not a supplemental table). And finally, when exposed to a messy room, people were much more likely to choose nutritional supplements labeled as "New!", rather than "Classic!" to add to their smoothies, suggesting that the environment might encourage interest in novelty. So, the next time your boss or roommate is bugging you to clean up your act, you can give them this paper to read and tell them that their tidiness is keeping them boring. Physical order produces healthy choices, generosity, and conventionality, whereas disorder produces creativity. "Order and disorder are prevalent in both nature and culture, which suggests that each environ confers advantages for different outcomes. Three experiments tested the novel hypotheses that orderly environments lead people toward tradition and convention, whereas disorderly environments encourage breaking with tradition and convention-and that both settings can alter preferences, choice, and behavior. Experiment 1 showed that relative to participants in a disorderly room, participants in an orderly room chose healthier snacks and donated more money. Experiment 2 showed that participants in a disorderly room were more creative than participants in an orderly room. Experiment 3 showed a predicted crossover effect: Participants in an orderly room preferred an option labeled as classic, but those in a disorderly room preferred an option labeled as new. Whereas prior research on physical settings has shown that orderly settings encourage better behavior than disorderly ones, the current research tells a nuanced story of how different environments suit different outcomes." Bonus quote: "Participants completed tasks in a room arranged to be either orderly or disorderly (Fig. 2). To measure creativity, we adapted the Alternative Uses Task (Guilford, 1967). Participants imagined that a company wanted to create new uses for the ping-pong balls that it manufactured. They were instructed to list up to 10 new uses for ping-pong balls.

Fig. 2. The rooms used in the orderly (left) and disorderly (right) conditions of Experiment 2.