With An Injection, Mice Nearly Double Their Endurance 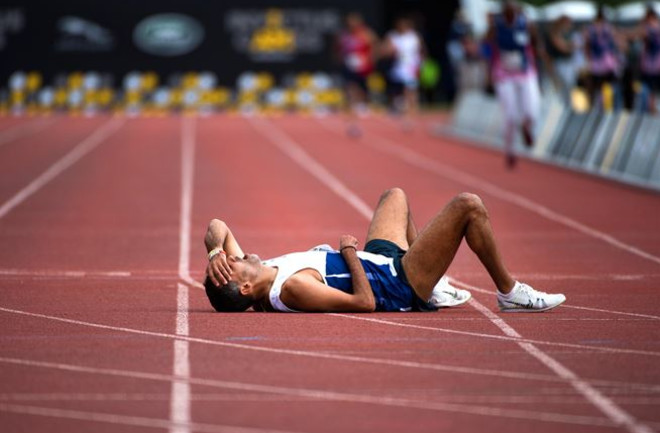 (Credit: EJ Hersom/Department of Defense) It's a familiar scene that played out most recently at the London marathon: An exhausted runner staggers and falls in the home stretch, unable to will their legs forward another step. It's an extreme example of a phenomenon endurance athletes come to know intimately, often called "hitting the wall," or sometimes by the more offbeat term "bonking." The proverbial wall appears when our bodies have run out of stores of glucose, a sugar molecule that is our main source of energy during strenuous exercise. Without energy, our muscles can't function and we run smack into what feels like a physical barrier. With training, athletes can push the wall back by conditioning their muscles to get better at burning fat as well, which gives them access to a second energy source.

From Sugar to Fat

The gradual process by which our bodies come to prefer using up fat reserves has enticed exercise scientists for some time, because it's a key part of enhancing endurance. The better we get at using fat, the longer we can exert ourselves. The most basic way to do this is through exercise — our bodies will eventually learn to do it. But, if researchers can figure out how the body does it, we may find a short-cut to increasing endurance. Scientists have been getting closer to the finish line for some time now, and much of the research focuses on a single receptor in our bodies. Back in 2003, a paper found that a receptor in our body called the peroxisome proliferator-activated receptor delta (PPARd) seems to train our muscles to preferentially burn fat over glucose when we exercise. Further research in 2004 found that genetically engineered mice with upregulated PPARd ran twice as far as regular mice, which they attributed in part to the increased production of a type of muscle fiber—a 2008 paper backed those results up. Most research on this topic has explained the effects of PPARd as part of a larger ecosystem that also requires the growth of new muscle fibers and ramped-up mitochondrial action to produce better endurance. In addition, most studies found that some level of physical activity was still required to see results, leaving us somewhat short of "exercise in a pill." But we're inching closer. A new paper, again working with mice, claims to have kicked PPAR delta into action with just a single molecule, no exertion required.

Exercise Minus the Workout?

As before, researchers from the Salk Institute for Biological Studies again increased the expression of PPARd using a molecule known by the name GW501516. In a paper published Tuesday in Cell Metabolism, they say that their mice ran longer, which wasn't necessarily new, but this time, they did it without any exercise. In tests on a treadmill, the modified mice ran roughly 100 minutes longer than normal mice without any kind of training. They had essentially gotten the mice to reap the benefits of exercise without actually doing any. "When we think about exercise and the metabolic benefit of exercise, we think of a few mechanisms... more mitochondria, fiber type shifting from fast to slow twitch fibers, enhanced fat metabolism," says Jill Barnes, an assistant professor in the department of Kinesiology at the University of Wisconsin-Madison who was not involved with the study. "This study suggests that PPARd affects the muscle’s fuel selection, namely by preferentially burning fat and sparing glucose, without relying on increased mitochondria or slow twitch fibers. The genes activated by PPARd or the GW agonist all appear to be related to enhanced fat metabolism." This had only been observed once before, in 2015, and the Salk researchers were able to take their research a step further and show why this particular molecule allows us to vault over the wall. While it was thought that GW501516 just helped our bodies to burn fat, they say that it has a second effect as well. Not only do our muscles start drawing on fat reserves, they begin leaving glucose alone, alloting more for our brains and other vital organs. With more energy to use, our bodies forestall the kind of critical shortages that cause us to run into the dreaded wall. And this is all thanks to one little switch.

Hold Off On That Pill

If this would-be wonder drug is sounding a little too good to be true, you're right. You may not recognize the name GW501516, but its street name may ring faint bells. Endurobol, as it's known on supplement sites, is a performance-enhancing drug that came to light in 2013 after a Russian cyclist was banned after testing positive for the substance. It's still sold online, but even amateur athletes may want to exercise caution. The drug has been found to cause cancer in rats during lab studies, and drug maker GlaxoSmithKline called off tests of the compound in 2009 after finding unacceptable toxicity. Tests in humans haven't turned up any link to cancer as of yet, but the if the risks were considered too unacceptable for a drug company, you might want to hold off on it. Even if we're not about to start adding Endurobol to our diets, the results are still of interest to researchers hoping to help those who may have difficulty exercising, such as the elderly or those with diseases like muscular dystrophy or cystic fibrosis. For those who may find exercise difficult, a streamlined metabolism may help give them the boost necessary to make gains in physical fitness. It also allowed the researchers to further elucidate what happens to our bodies when we're operating near the peak of our physical abilities — potentially helping us to push boundaries even further. So, to reiterate, we won't be popping pills and running marathons anytime soon. But we are closing in on the mechanisms that sculpt our bodies into paragons of endurance, and that knowledge could help us refine our workouts even further. Besides, we already know how to get better at running. Just keep doing it.