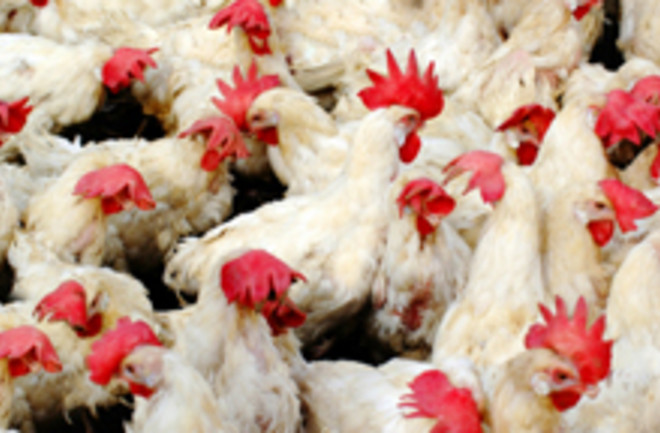 Flu season is taking a toll on chicken farms across Asia, where new bird flu outbreaks are cropping up from China to India, leading to massive poultry slaughters. Health officials say the chickens are infected with the deadly bird flu strain known as H5N1, but thus far there have been only a few cases of human infection. Two human cases have been reported in Indonesia, one in Cambodia, and in Egypt a 16-year-old girl died of the virus. Yi Guan, a Hong Kong microbiology professor, says the recent spate of cases across the region may not be completely isolated and would likely get worse as winter sets in, when the risks of influenza tend to peak [The Wall Street Journal].

In China, more than 370,000 chickens were culled after an outbreak was announced in the eastern province of Jiangsu. The usual precautions have been imposed: birds have been slaughtered in the surrounding area, farms quarantined and disinfected, and the transport of fowl banned. But no information has been released about the scale of the outbreak – how many birds were found to be carrying the H5N1 strain of the virus and how many of them died [BBC News]. Chinese authorities say migrating birds probably brought the virus to local farms.

Meanwhile, Indian authorities announced that they will cull 200,000 birds, while Hong Kong has already quarantined a chicken farm and culled 80,000 birds. Officials say this is the first flare-up of the H5N1 virus in Hong Kong in five years, and its reappearance is raising questions about the effectiveness of the measures taken to stop the spread of the virus. Yi Guan warns that the Hong Kong farms were using vaccines that didn’t provide full protection against the H5N1 and can’t keep up with its mutations. “That vaccine (used in Hong Kong) was made to fight an American strain of the H5N2, and it is very distant from the Guangdong strain of the H5N1 virus here,” he said. “When there were no outbreaks, we just assumed it was protective. Now that there is an outbreak (in the Hong Kong farm), we assume it is useless,” he said [Reuters].

Bird flu remains a threat primarily to poultry, not humans, among whom it is poorly transmitted. Since a peak in 2006, the number of confirmed human cases of H5N1 bird flu reported to the WHO has tapered off, with 38 cases this year — the majority in Indonesia — leading to 29 deaths. That’s a tiny fraction of the number of deaths each year from regular influenza. A threat remains in the strain’s potential to mutate into a truly human disease that health authorities warn could kill tens of millions [The Wall Street Journal].

How Viruses Could Cure Cancer and Save Lives