Around 444,000 people in the U.S. use gastrostomy tubes, but they come with significant risks and hassles. High-tech G-tubes could change that. 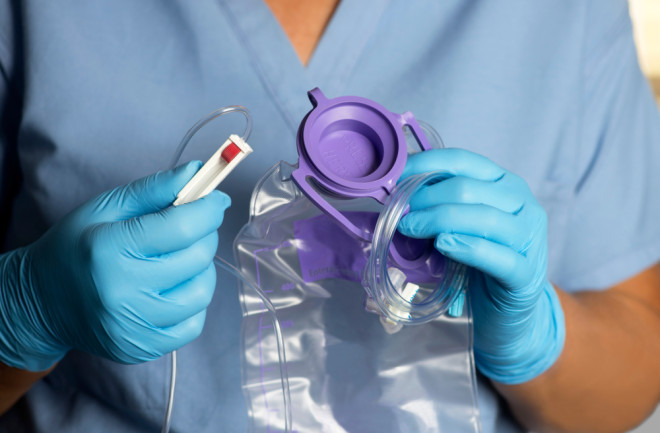 Around 440,000 people in the U.S. use a gastrostomy tube (also called a G-tube), according to 2013 data. It can replace or supplement oral feedings by delivering water, food and drugs to the stomach, where a G-tube is surgically, radiographically or endoscopically placed.

I use one myself. Eating was always a chore for me because I have several disabilities from a childhood brain tumor. Many of my recent hospital visits have been due to pneumonia. But after a lengthy stay in the ICU and months of swallow therapy, I decided to put a G-tube in because it would be safer for my lungs and conserve energy from the laborious task of eating — and it would be healthier than my past diet.

There’s two kinds of G-tubes: One is called a ‘conventional tube’ and is about six inches long. It’s floppy like a noodle, and is coiled and taped to the torso. Therefore, it can unfortunately build up residue and irritate skin. This type is most frequently stocked in hospitals. It’s used while the body forms a feeding channel between the stomach and skin. Elderly people tend to need it the most because they more often require nutritional support.

This conventional model can render physical movement difficult or painful, and some health care providers assume that older people are less active. Still, people with G-tubes (regardless of age) deserve to partake in daily activities like errands and fitness classes.

The other type — a ‘low-profile Mic-key tube’ — must be ordered by a hospital and is meant for a younger, more active population. A part of the Mic-key called a ‘button’ sticks out an inch from the stomach. The button has a hole in which an extension tube is twisted and locked into place. Then, a syringe is connected at the other end for feeding.

While most people use a G-tube for a short amount of time while recovering from an injury or experiencing a serious illness, some have it permanently implanted.

Despite their advantages, these devices can endanger patients. Due to allergy and sensitivity problems, digestive or absorption issues, or a rejection of the enteral feeding, about three in 10 individuals experience Enteral Feeding Intolerance (EFI). This can result in pneumonia and other serious complications. And the Mic-key tube needs to be replaced every six months because it may become blocked, dislodged or degraded.

The G-tube’s supply and safety issues have prompted a new approach. Last July, Belgium-based manufacturer VIPUN and Baxter Inc., one of the country’s biggest medical suppliers, announced a partnership to create a smart feeding tube. What will make a smart G-tube ‘smart’ is its ability to measure stomach motility (or movement) for clinicians.

This specialized G-tube will certainly help prevent nurses and doctors from getting liquids and medications into patients’ lungs. Still, the claim is somewhat misleading because Baxter solely focuses on the amount of liquid in the stomach, not the content. If a patient gets sick from one ingredient, it likely doesn’t matter if their stomach is completely full or half full.

With the increase of smart biotech products like Dexcom, which measures glucose levels, and Fitbit’s oxygen and heart rate monitoring, it’s fair to say the wearables market is ramping up — giants like Cardinal Health are also looking into a smart G-tube design. And while many people see the equipment's invasive nature as a disadvantage, it may actually render it the next biotechnology breakthrough.

A proper smart G-tube would not have its information distorted by the skin. Hypothetically, the data could be accessed through an encrypted app like Signal, and sent to medical professionals in real time. This technology is already life-saving, but it could be more so if the individual is unconscious or unable to communicate.

Another worrying aspect of the G-tube experience is the environmental waste it creates. From formula cartons to syringes, all of the associated products should be made from biodegradable materials to decrease their toxic impact on our world. We have already witnessed how medical equipment takes its toll on the Earth. Currently, tube extensions are made of polyurethane or silicone and need to be replaced every six months. These materials are then destined for a landfill. If a smart G-tube had an extension like a rubber straw that only required replacement once or twice every several years, we could cut down on waste.

A smart G-tube may sound far-fetched, but plenty of people spend their lives with a pace-maker or Inspire device (which is used to treat sleep apnea) inside their bodies. In 2019, the global feeding tube market was valued at $2.5 billion. That figure may grow to $4.2 billion by 2027. Numbers aside, a robust smart G-tube should be made simply because it will improve hundreds of thousands of people’s quality of life. And if we can land the Perseverance rover 38 million miles away at 1,200 miles per hour, we can make a G-tube that's flush with the skin.