Why is a Young Man Suddenly Convinced He's a Doctor?

When an economics student starts practicing medicine on his classmates, real doctors have to step in. 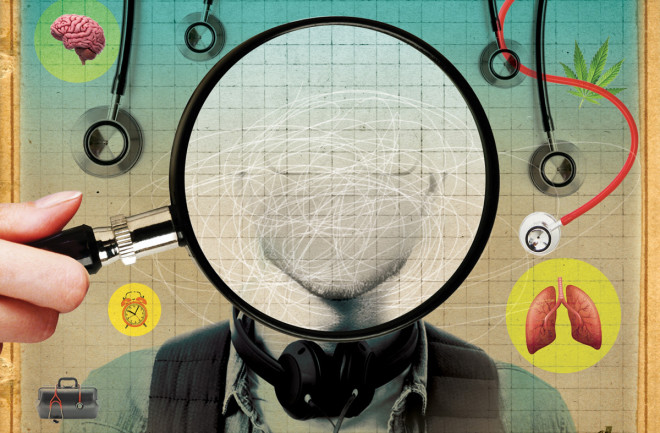 When Alvin arrived at the hospital, he believed he’d been sent there as a doctor working on behalf of the U.S. government. “Which patient do I need to see first?” he asked the triage nurse.

Until recently, Alvin had been an ordinary economics graduate student. But somehow he’d become convinced that he was a trailblazing physician who needed to identify a rare strain of tuberculosis before it spread throughout campus.

That morning, he arrived at his graduate school classroom with a stethoscope around his neck, a surgical mask over his face and a bag containing more masks and several thermometers. He began to practice medicine on his classmates.

At first, his manner and physician attire made them think he was joking, as Halloween was just around the corner. But when he tried to remove the shirt of a female student to better listen to her lungs, their late-arriving professor called the police. And the police called an ambulance.

What caused this previously healthy 25-year-old man to become delusional? After an initial screening from the emergency medicine physician on duty, I was called to sort this out.

At the time, I was a new psychiatry resident. But even at that early part of my career, I knew to focus on four possibilities for Alvin’s behavior: a stress reaction from a trauma, a manic phase, a psychotic episode or a drug-induced state. I’d also heard about medical conditions, such as lupus and hyperthyroidism, that could cause severe psychological changes. But the emergency room doctor found no supporting evidence for those possibilities after his examination.

Skimming Alvin’s medical records, I learned that he had visited the student health clinic the year before. He was diagnosed with depression but declined treatment. The note also mentioned occasional marijuana use, but not in more than a year. He told the doctors he hadn’t used any other street drugs. In terms of his physical health, the records showed he’d recently visited the health clinic for cold symptoms and received a prescription decongestant.

Essentially, I was starting from scratch.

I met Alvin in a small room in the emergency department’s psychiatric wing. He paced in a circle and was doing some sort of counting exercise with his fingers. He seemed a few days overdue for a shave and a shower.

“Are you OK, doctor?” he asked, observing me closely. “You look stressed.”

I smiled and gently told Alvin that his classmates and teachers had concerns about his mental state, as did the nurses and doctors at the hospital. He nodded. I asked him why he thought they were worried.

“Because I have been energetic,” he answered. “Maybe too much so for them.”

“How long have you been feeling this way?” I asked.

“A few days. Maybe a week. Conventional time isn’t as important for me now.”

He told me that he hadn’t slept more than two or three hours a night. And even that felt like too much because he had so much lifesaving work to do. He said he hadn’t had any recent traumatic experiences in his life or with anyone close to him.

Alvin’s lab results came back. Stepping away to a nearby computer station, I saw that his alcohol level was zero. Also, his urine drug screen — which tested for marijuana, cocaine, phencyclidine (PCP), opioids, benzodiazepines and amphetamines — came back clean. It appeared that drugs weren’t causing his state.

His blood tests showed normal liver, kidney, glucose and electrolyte/mineral values. We still needed to wait for results on his thyroid levels, but I suspected the data would not show an identifiable cause for his behavior. He seemed headed toward a diagnosis of bipolar disorder and treatment through medications.

I went back to Alvin’s room to perform a physical exam. Before beginning, I asked him how his physical health had been in recent months. He told me he had a bad cold five or six weeks ago and missed a few days of classes. He saw a doctor who wrote him a prescription, but the medicine didn’t help his condition.

Alvin said he began to improve only after taking an over-the-counter medicine. Out of curiosity, I asked him its name.

I stared blankly. “Dextromethorphan,” he continued. “It’s the active ingredient in most cough suppressants. I started with the pills. I switched over to the liquid a few weeks ago.”

Switched over a few weeks ago? The instructions on cold medicines always say to stop use after a week, or at most 10 days. “How long did you end up taking it?” I said.

“I’m still using it,” he said, reading the confusion on my face. “For recreational purposes.”

I frowned in surprise. I’d always been naïve and cautious about drugs in my personal life. And while I’d seen TV reports on the decongestant pseudoephedrine being used to produce crystal methamphetamine, I hadn’t heard anything similar about dextromethorphan to make me view it as a drug that could be abused. Nor had I heard about this in medical school.

My off-handed question about the medicine’s name opened a new path of investigation. Could this drug explain his behavior?

After looking into DXM’s history, I found that it was approved by the FDA in 1958 as a non-prescription cough suppressant. During the 1990s, a handful of obscure medical case reports described the potential dangers of DXM when taken in high doses. It could produce psychological symptoms of intense euphoria and altered perceptions of surroundings, similar to what people experience with the drugs ketamine and PCP.

As with those drugs, using DXM causes a pleasurable high at first, but it can subsequently lead the user into a psychotic state. For example, in 1996, a medical journal reported the case of a lawyer standing half-naked outside his home and wielding a gun in an effort to free his wife; he believed she was being held hostage inside. He had been using increasing amounts of cough syrup with DXM for three months.

In 2005, a few years after my encounter with Alvin, the FDA published a warning on the dangers of taking DXM in high doses. Today, the drug is still part of over 100 cough and cold medicines. In recommended amounts, it’s safe. But the potential for abuse is always there.

Alvin acknowledged that DXM had clouded his thinking, and he agreed to be admitted to the inpatient psychiatric hospital floor for observation. Once he stopped taking the drug, he returned to his normal state within three days. He said during his discharge that what had started out as fun had gotten out of hand, and that he’d learned his lesson.

Alvin’s case was an eye-opener for me early in my career. Realizing that both I and the emergency room doctors had almost overlooked this less well-known type of drug abuse, I learned two important lessons: ask patients extra questions and be humble enough to let them lead you to their diagnoses.

Damon Tweedy is an associate professor of psychiatry at Duke University School of Medicine and author of the book Black Man in a White Coat: A Doctor's Reflections on Race and Medicine. The cases described in Vital Signs are real, but names and certain details have been changed. This article originally appeared in print as "Delusions of Grandeur."