Anatomical development is well underway before sex determination in an embryo. And, according to evolutionary theory, the better question may be: Why not? 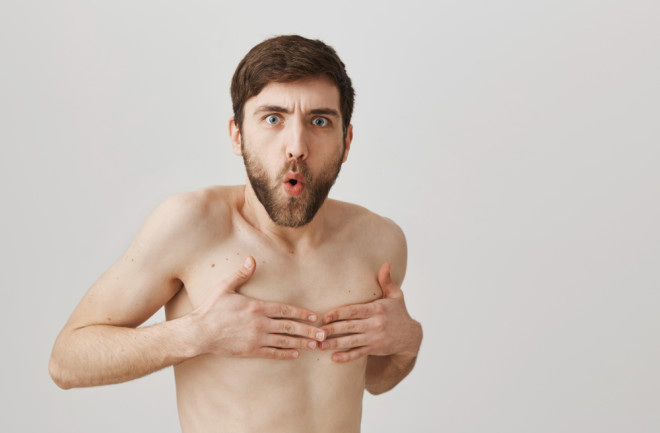 Looking over every detail of the human body, male nipples may be the most obviously useless. In females, they are essential for delivering life-sustaining breast milk to newborns. In men, they serve, well, no apparent purpose. Virtually every other anatomical structure clearly furthers the enterprise of survival and reproduction, so why would we evolve one that doesn’t?

The answer may lie in a subtle misunderstanding of evolutionary theory’s fundamental assumption: that living organisms change over time, becoming better adapted to their environments in response to the pressures of natural selection. Few scientific tenets are as certain as this one. But it’s easy to oversimplify that account and interpret it to mean that every modification in a species is adaptive, developed to fulfill a vital function.

This tempting idea goes back as far as Erasmus Darwin, the grandfather of Charles Darwin, who considered adaptivity in his 1794 book Zoonomia; Or, the Laws of Organic Life, an early treatise on evolution. As far as he could see, all animal traits seem to have evolved toward greater utility, with one exception: “The breasts and teats of all male quadrupeds, to which no use can now be assigned.”

As evolutionary theory progressed through another Darwin and beyond, biologists refined their understanding of its mechanisms. The evolutionary biologists Stephen Jay Gould and Richard Lewontin, in a highly influential (and provocative) 1979 paper, argued against the “Panglossian paradigm” of adaptation, which claims — like its indomitably optimistic namesake in Voltaire’s Candide — that evolution has crafted “the best of all possible worlds.”

Gould and Lewontin contend that other factors besides natural selection control the operation of evolution, one being simply the lack of selective pressure against a trait. The male nipple doesn’t aid in survival and reproduction, but it doesn’t hinder, either. Why would natural selection do away with a harmless circle of flesh?

In another paper, in 1993, Gould addressed the nipple query specifically. He wrote that of all the evolutionary conundrums for “well-informed nonscientific readers … no single item has evoked more puzzlement than the very issue that Erasmus Darwin chose as a primary challenge to his concept of pervasive utility — male nipples.” To Gould, the solution is straightforward. It requires “no adaptive explanation at all,” only the realization that evolution deals with more pressing matters than the superficial features of a man’s chest.

There is, of course, a proximate explanation for the persistence of male nipples. In an odd way, Erasmus Darwin nearly glimpsed the truth in his own speculation two and a half centuries ago, when he suggested they were vestiges of an earlier stage of human evolution — a time “during the infancy of the world” when, he thought, all people were hermaphrodites.

Males and females do, in fact, start from the same genetic blueprint. Embryos, in their first weeks, develop structures with the potential to become either male or female sex organs. Only later do sex-specific hormones begin to mold those structures into either a clitoris or a penis, either functioning mammary glands or unproductive male nipples.  “Males and females are not separate entities, shaped independently by natural selection,” Gould writes. “Both sexes are variants upon a single ground plan, elaborated in later embryology.” Nipples begin to appear before that sex differentiation begins, so males are stuck with them as they mature.

It’s not entirely fair to say they serve no possible purpose, though. Under unusual conditions, like starvation or a spike in levels of the hormone prolactin, men can actually produce milk — to answer Robert DeNiro’s unforgettably funny and awkward inquiry in Meet the Parents. As Pulitzer-prize-winning author Jared Diamond wrote in a 1995 Discover  article titled Father’s Milk, “Lactation, then, lies within a male mammal’s physiological reach.”

Nipples are also highly sensitive, and research shows that in men as well as women they respond to sexual stimulation. One study found that about half of men (and more than 80 percent of women) report nipple stimulation enhances their sexual arousal. Maybe these minor compensations, rather than a boost in physical and reproductive fitness, justify the male nipple’s existence.

More From Discover
Mind
Why the Human Brain Takes Decades to Develop
The Sciences
Back Pain is Highly Common Among Astronauts
Health
Extreme Fatigue: 4 of the Longest-Lasting Sporting Events
Health
What Science Says About the Weight-Loss Potential of The One-Meal-a-Day Diet
Health
How Saliva Changes The Flavor Of Food
Health
Walking vs. Running Benefits: Should You Walk or Run for Exercise?
Recommendations From Our Store
My Science ShopDiscover STEM Kits
My Science ShopDiscover 2022 Calendar
My Science ShopStrange Science
My Science ShopElements Flashcards
Shop Now
Stay Curious
Join
Our List