Why Can't We Can't Stop Snacking? Maybe Because of Pot-Like Chemicals 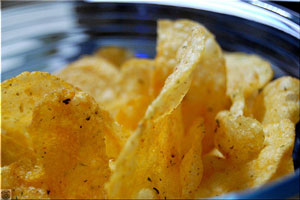 Have you ever eaten a single potato chip or French fry that sent you spiraling into nearly uncontrollable gluttony? Scientists are now saying that these sober binges are actually quite similar to pot smokers' notorious bouts of the munchies: fatty foods cause your body to release marijuana-like chemicals

called endocannabinoids, and this likely compels you to continue stuffing your face. In a study to be published this week in the Proceedings of the National Academy of Science, Daniele Piomelli and his colleagues at UC Irvine investigated the connection between fat intake in rats and their production of endocannabinoids

, the main active ingredient in marijuana. They allowed the rats to sip on several types of drinks, including ones high in sugar, protein, or fat, and monitored the rats’ endocannabinoid levels. The researchers learned that the high-fat drinks sparked the release of endocannabinoids, but the sugar and protein beverages did not. When a rat tasted a fatty drink, signals traveled from the rat's tongue to its brain. The vagus nerve

bundle in the brain then routed the message to produce endocannabinoids down to the rat’s gut. The researchers believe that here intestinal endocannabinoids triggered the release of other chemicals, all screaming a single word: EAT! The researchers suggest that it may be possible to create drugs to block endocannabinoid signaling in the brain, and this could help people curb some of their gluttonous behaviors. Though, it's probably easier to just keep away from the snack isle at the grocery store. But would such a drug be the end of Lay’s

“betcha can’t eat just one” slogan? Probably not. Really, have you tried the tomato and basil-flavored chips? (via UC Irvine