The senses are crucial to our survival as a species, but they also have implications for our mood and mental health. 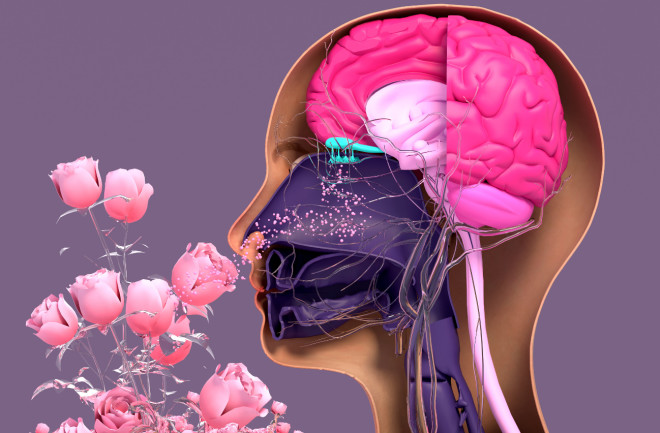 In 2018, Jennifer Culverson was at home in Charleston, South Carolina, when she was violently assaulted by her then-boyfriend. (Culverson's name has been changed to protect her identity.) Her attacker overpowered her and battered her head against the floor with such force that it caused a traumatic brain injury. In the weeks and months that followed, Culverson couldn’t walk or get out of bed. She had trouble putting words together and her speech was slurred.

It took months for the most immediate of her wounds to heal and for Culverson to completely assess the damage done to her brain. But when all was said and done, she noticed another painful outcome of the assault: She had lost all sense of taste and smell.

In the moments after the initial assault, it wasn’t the first thing on her mind. As time passed, however, Culverson came to realize that something as simple as enjoying a nice meal with friends was about more than just the food. “Today, when I go out for dinner with friends, I have them describe what their meal tastes like because I don’t want to completely miss the experience,” she says.

While traumatic brain injuries are a common cause of taste and smell going south, it's far from the only one. Nearly 1 in 5 Americans over the age of 40 experience some degree of taste loss, according to the National Institutes of Health, and an even greater number have an altered sense of smell. These senses can become impaired as a result of age, certain medications or a variety of medical conditions — ranging from autoimmune disorders such as Parkinson's to cancer. And of course, the conditions have more recently been associated with COVID-19.

More Than a Mouthwatering Meal

As in Culverson’s case, most patients don’t realize they’ve lost their senses of taste and smell until the fog has lifted from an initial injury and they’ve had time to assess the damage. “Early on after a traumatic brain injury a patient might be confused or on medications,” says Brian Greenwald, medical director of the Center for Brain Injuries and an associate medical director at JFK Johnson Rehabilitation Institute. “And if they’re hospitalized, they’re not eating the types of foods that they’re used to eating so it’s not often noticed at first.”

He says that it’s often a lack of appetite in his patients that indicates the secondary loss of taste and smell. Appetite is in part driven by these senses and without them we’re likely to eat less. Weight loss is another sometimes unfortunate side effect, he says.

In short, it keeps our appetite intact and ensures we’re eating enough to stay healthy — something that was especially important during prehistoric times, when food was less accessible. But taste and smell are also crucial to our survival as a species because they protect us from danger, Greenwald says. The smell of smoke is an indication of fire, the smell of gas warns of a gas leak and an unpleasant odor tells us that food has gone rancid and isn’t safe to eat.

A loss of taste and smell, he adds, also has implications for our mood and mental health; some people may become depressed as a result of what they’re missing out on. The connection to wine and food is a common example, but they may also miss less obvious things like familiar people and places. “I remember taking care of a young mother who had a serious traumatic brain injury and had secondary loss of smell,” Greenwald says. “She became depressed because she missed being able to smell her children and the connection she felt from it.”

Unfortunately, loss of taste and smell is a common outcome of a traumatic brain injury and can be influenced by the area of the brain that was affected. Even outside of the brain, the thin and wispy olfactory nerve is charged with shuttling information from the nose and mouth to the brain. (Taste and smell are inextricably linked because both taste buds and neurons from the nose are transported together.) En route to the brain, they move through a boney structure called the cribriform plate — which, if shattered as a result of a brain injury, can sever the nerve and damage the ability to taste and smell.

In about 30 percent of cases, Greenwald says, the nerve repairs itself and the senses return. But after one to two years, the injury is usually considered permanent.

More recently, the loss of taste and smell has been associated with a COVID-19 diagnosis. But in this case, according to Rajeev Fernando, an infectious diseases consultant at FEMA emergency field hospitals nationwide, the senses are much more likely to return — usually within about four weeks. But sometimes that doesn’t happen. If taste and smell are gone for longer than a month, it’s considered a “long hauler symptom” and recovery can take much longer.

The coronavirus attaches to receptors present in abundance in the nasal cavity, preventing them from functioning normally and causing a loss of taste and smell in most people. In fact, it’s the most common indication of infection with the virus. If you have vague, constitutional symptoms and aren’t feeling well, combined with a sudden loss of taste and smell, Fernando says he’s usually confident that you have COVID-19.

Initially, doctors used steroids to stimulate the senses but they’ve been proven ineffective. “Smell training,” in which patients smell familiar scents like garlic and orange on a regular basis, however, has been shown in recent research to improve olfactory recovery. Still, there are many unknowns. Researchers aren’t completely sure why taste and smell return immediately for some and not others. “I’ve seen some cases that have gone as long as a year and we’re just not sure why,” Fernando says.

As for Culverson, she’s still hopeful that one day her senses will return. Each day she attempts to smell essential oils and puts on the same perfume that she wore prior to the assault. For now, she can taste some spice and feel the effervescence of bubbly drinks on her tongue. And once in a great while, she’ll come across a food that she swears she could taste... but for the most part, after three years, taste and smell have not returned.

She’s seen people around her temporarily lose these senses due to COVID-19 and says that, in a way, it’s made people more empathetic to her situation. They can better understand why taste and smell are about way more than just a fancy meal or a great glass of wine. “You just can’t understand how important it is until it’s gone,” she says.