Doctors remove an oozing mass inside a woman’s skull. Then, it comes back. 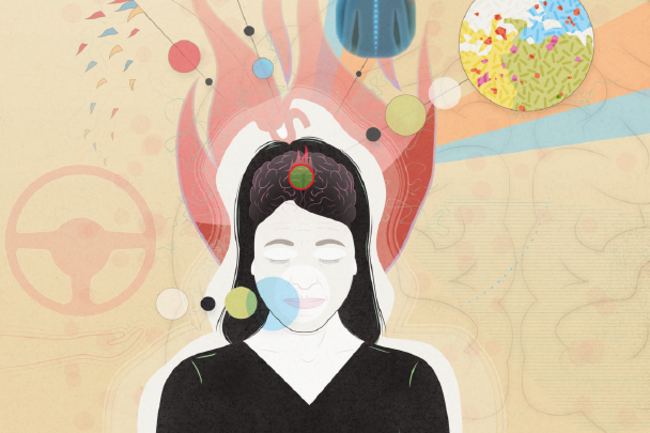 This story appeared in the July/August 2020 issue as "A Wildfire in the Brain." Subscribe to Discover magazine for more stories like this.

As soon as I read Aram’s email, my heart sank. My former undergraduate student wanted to discuss an emergency operation on his mother’s brain? Yikes.

Later that night, Aram and I spoke on the phone. He explained that less than a week earlier, his 56-year-old mother, Flora, was driving to work when her left hand went numb and dropped from the wheel. Nonetheless, she continued her rounds as a social worker, faithfully visiting clients.

At first, she passed her physical with flying colors. The next night, she felt icy currents flow through her arm and went back for a brain scan, which was normal. The day after that, one of her fingers started to move with a mind of its own, prompting a spinal X-ray. It, too, showed nothing unusual — so Flora went home again.

Another 18 hours passed, and, suddenly, the entire left side of Flora’s body started to shake. She rapped on her neighbor’s door, and the terrified woman called an ambulance. Over the next 40 minutes, Flora’s seizure continued until a powerful drug stopped the bizarre fit. Finally, an MRI revealed an unmistakable mass in Flora’s brain. Did it represent a stroke, a tumor or something else? No one could say.

A second MRI the next day showed that Flora’s irregular mass had nearly doubled in size. That’s when Aram, his brother and their dad huddled with a young, attentive neurosurgeon. By now, Dr. Omid was certain he knew how to treat Flora’s problem, but he was also patient, answering many questions.

Finally, the surgeon shared his own verdict. “In a situation like this,” he said, “we should not wait. First thing tomorrow, she needs to go to the O.R.”

An inflammatory mass in the brain can stem from several causes. For example, a bright-ringed lesion often signals toxoplasmosis in patients with AIDS. This protozoal blight transmitted by unwashed vegetables or undercooked meat sometimes slumbers for years, only to ignite when the immune system fails. And in otherwise healthy patients, a larval tapeworm infection called cysticercosis can cause fluid-filled blebs to grow in the brain until they start to leak, often prompting seizures. In Flora’s case, however, Omid suspected something different.

Given its florid rim and rapid growth, Omid believed Flora’s brain mass was an angry pocket of pus — a bacterial abscess demanding urgent action before it triggered a stroke or internal bleeding. But, if so, what kind of bacterium had breached Flora’s brain and where had it come from?

At that point, none of Flora’s head and neck exams, including standard dental X-rays, had hinted at a hidden source of sepsis in her sinuses, ears or teeth. Nor did a later echocardiogram show a vegetation — a crusty clump of microbes on a heart valve — that can break loose and travel to the brain. But even if Omid was unsure of its original source, the mass in Flora’s brain needed to be drained.

Her operation went as planned. First, Omid made an S-shaped incision near the top of her head and removed a small piece of bone, which would later be replaced. He then cut the brain’s leathery covering and used special devices to map the abscess’ margins. Another tool helped him to avoid injuring Flora’s motor strip, the portion of her brain governing voluntary movement. Finally, Omid carefully entered the abscess cavity, suctioned its pale, cream-colored contents and sent samples to the lab.

Forty-eight hours later, Flora’s perp had a name: Streptococcus intermedius, an agent that normally lives in the mouth and intestine. The beadlike bacterium can go rogue after coming in contact with sterile brain tissue, where it binds to proteins and activates white blood cells. The good news? Treating a bout of S. intermedius is fairly straightforward. After drainage, typical treatment consists of a month or more of an IV antibiotic plus a second medication for added coverage. Flora also took steroids to help subdue the fiery inflammation surrounding the abscess.

And at that point, her story should have ended. But it didn’t. 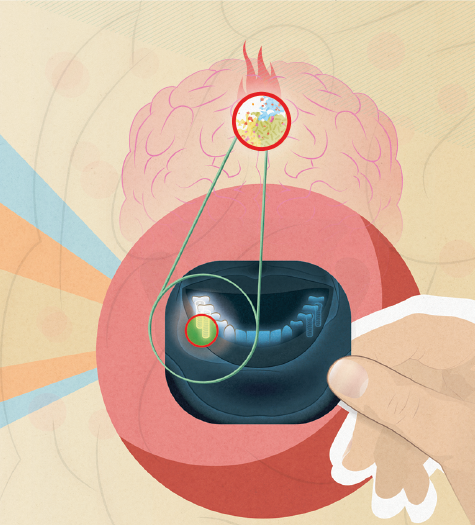 Flora’s abscess came back just one month after her operation. One theory: High-dose steroids — often a double-edged sword in patients whose immune systems are already failing — paralyzed her defenses. But in a healthy woman like Flora, that wasn’t likely.

Had the abscess needed more thorough drainage? Once again, probably not. In most brain abscesses that erupt seemingly out of nowhere, surgical drainage plus well-chosen antibiotics are perfectly sufficient treatment.

One more clue continued to trouble Omid. While examining Flora’s mouth during his pre-op exam, he saw gingivitis. He also learned that, a decade earlier, the native of Armenia had received eight dental implants after moving to the U.S. It was time to take a closer look at Flora’s teeth using a CT scan, which could offer a more in-depth view than a standard dental X-ray.

Bingo. Two weeks after her second operation, Flora’s CT scan revealed “periapical lucency” — light or moth-eaten bone — at the base of an implant at the back of her mouth. It was as if a bright yellow highway sign had just pointed to the answer.

Days later, a specialist removed hardware and screws from side-by-side molar implants in Flora’s right lower jaw. Pus immediately welled from their sockets, but drainage of the dental abscess and antibiotics led to rapid healing.

Today, does Flora miss those two back teeth? Hardly. She also remains grateful for her implants. “In Armenia,” she told me six months after her extractions, “there were no implants, just removal.”

But removal of her infected implants ended the battle in her brain. Within months, follow-up pictures showed no further traces of the inferno that once burned within.

Claire Panosian Dunavan is an infectious diseases specialist at UCLA. The cases described in Vital Signs are real, but certain names and details have been changed.

How Music Therapy Is Easing Anxiety and Isolation