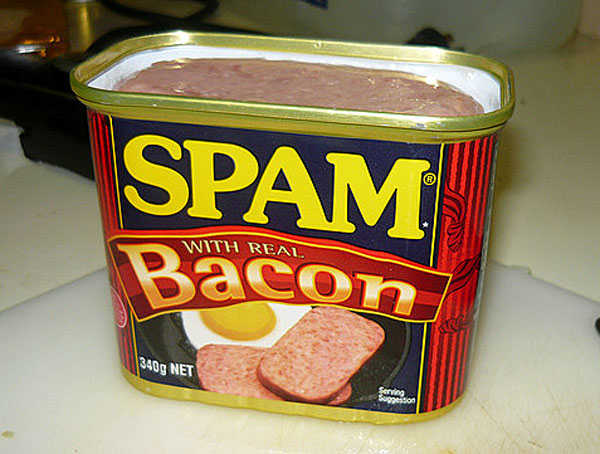 You'd be surprised what's in your lunch. When you look closer at what makes your American cheese melt well

and your hotdog so delicious

, you might cringe for a few minutes, but hopefully you also get curious about what other characteristics we like in our food and how food manufacturers have, for better or for worse, given our taste buds what they want. Over at Wired, they've dissected Spam with Bacon

, and what they find runs the gammut from "Hey, it's cool that science can do that!" to "Maybe canned meat was a really bad idea." This description of bacon captures the balance nicely:

“The cured belly of a swine carcass,” says the USDA. “Mmmm, bacon,” says most of America. Large-scale curing is usually done by injecting a brine solution into the belly of a butchered swine. The brine contains sodium erythorbate, an antioxidant that’s chemically similar to vitamin C. But it’s not here to prevent scurvy; instead it boosts the conversion of the sodium nitrite in bacon into nitric oxide, which minimizes the production of carcinogens when the pork belly is fried up. The brining increases the meat’s weight by 12 percent, but a trip through a 128-degree smokehouse dries the bellies back to their original weight, ready to be combined with the pork and ham in this canned pigfest.