The Secret of Velveeta: How Cheese Food Is Made

As fall quickly approaches, it's time to look into a ubiquitous yet controversial component of American summer cuisine. 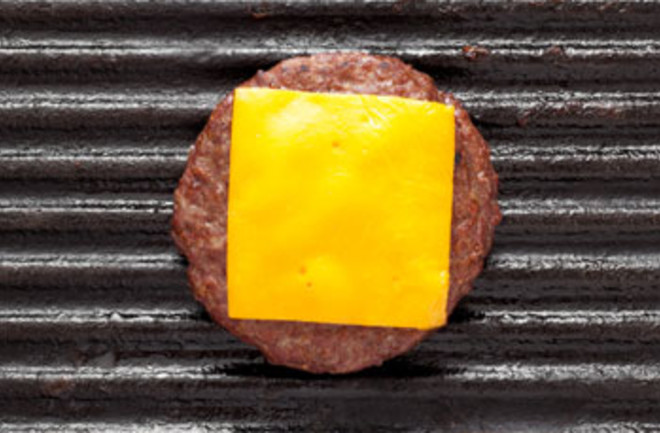 If you slapped some cheddar on your burgers this summer, you probably noticed its tasty, but unsightly, oil leaks. No matter how you slice it, a greasy slick will ooze out of melting cheese, when heat renders liquid fats that were solid at room temperature.

But if you used that miracle of modern science, cheese food, you saw a completely different phenomenon. Pale orange, velvety smooth, and tangy as Pinkberry, a perfect square of American cheese or Velveeta melts all in one piece. No drips, no grease, just a warm and delicious topping (depending on your taste in cheese) to your burger. It's fantasy cheese—the dairy of dreams.

And that's no accident. Cheese food is a carefully designed concoction based on some complicated chemistry.

To understand cheese food, first you've got to understand cheese. (Believe it or not, cheese food does actually involve real cheese.) The process was first developed at least 5,000 years ago, probably when an early dairy farmer stored milk in a bag made from an animal’s gut and discovered that tasty chunks began to form. An acidic environment is required for the cheese-making enzymes to work and for proteins to attract each other, so modern cheese makers start out by adding bacteria that work to get the milk to a comfy (low) pH. Then they add a substance usually harvested from veal stomachs called rennet, a mixture of enzymes that slice the ends off caseins, a kind of milk protein.

A complex dance of solubility ensues: freed of their ends, the caseins are hydrophobic, meaning they don’t mix well with water. They start to clump together in the milk. The acidifying bacteria make the casein molecules more hydrophobic, and thus, less soluble. They begin to literally fall out of the milk, forming a clumpy net in which fat globules are trapped. The resulting solid, called curds, is strained out of the remaining fluid and pressed into wheels or cubes, which are then aged and salted to taste. Voila—from Mozzarella to Gruyere, that’s how cheese is made.

Cheese was probably a pretty exciting invention to the early farmers who discovered it. It allows the storage of dairy product for long periods of time, since cheese doesn’t go bad nearly as quickly as fresh milk. But towards the beginning of the 20th century, some people decided that it wasn’t enough—to be shipped to warmer climes in the burgeoning global trade, cheese needed a still longer shelf life.

Walter Gerber and Fritz Stettler of Switzerland were among the first to play Dr. Frankenstein with cheese. They began by shredding and melting Emmentaler into a soup, which, of course, caused all of the fat to escape to the surface and form a giant slick. Cheese, as a combination of protein and fat, is a kind of emulsion, and heat disrupts the net of proteins that keep the fat trapped in the curd. When Gerber and Stettler added a salt called sodium citrate to their vat in 1912, however, fat stayed trapped among the proteins, even as the cheese melted and then cooled into a dense, easily sliceable form.

What happened when they added sodium citrate is the reaction that is still at the heart of cheese food, though other salts are often used nowadays. First, sodium citrate pulls a fast one on casein. Up till this point, nestled in between casein molecules have been calcium ions, which help hold the proteins together. Some calcium linkages exist even between caseins in milk, and more of them form as the dropping pH and the action of rennet enzymes cause the proteins to form curds.

Sodium citrate comes in and replaces the calcium ions with sodium ions, which are less positively charged (sodium: +1; calcium: +2). They thus make the caseins more negative. That means they’re less hydrophobic and more soluble, with the result that caseins now bind each other much more weakly than they did in cheese. They rearrange themselves into a looser, springier net, forming a substance that’s halfway between cheese and milk: the proteins are insoluble enough that their net can still trap fat molecules, yet soluble enough that the net is flexible and can withstand the heat rising up from a hamburger patty. Food scientists at Kraft describe it as partially reversing the process of making cheese.

Fast-forward through the gooey experiments and inventions of James Lewis Kraft and a number of other cheese-food pioneers—including special melting vats, new melting salts, and the advent of individually wrapped slices—and you arrive at modern cheese food, which goes by many monikers, depending on branding and FDA rules involving the product’s moisture and milk fat content: American cheese, Velveeta, pasteurized process cheese food, process cheese, and so on. Salts, whey, milk fat, and other goodies are also stirred into the vats to get certain specialized effects, but the core reaction is still the same as it was 100 years ago. Americans now eat more cheese food than natural cheeses. And it is, indeed, startlingly shelf-stable.

Cheese food is fiercely loved by many, some of whom create dedicated webpages and write Velveeta fan fic, and reviled by many others. There’s no denying that there’s something uncanny about the stuff’s rubbery smoothness, and for plenty of people, the irregularity of normal cheese is one of its most delectable and charming qualities; aging, a bacteria-driven process that cheese food bypasses entirely, results in an incredible array of textures, flavors, and scents.

But whatever camp you’re in, you’ve got to admit: the process behind processed cheese isn’t all that much stranger than the one for making natural cheese—one in which a key ingredient is veal stomach.