What to Do When Coughing Is Uncouth

While coughing helps keep us healthy, it isn't always welcome in public spaces. Here's how to temporarily stave off the urge. 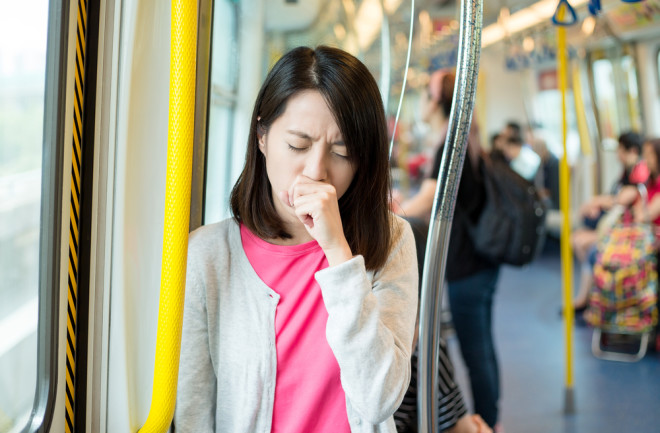 A London concert made headlines in 2014 — not so much for the comeback performance of famed violinist Kyung-Wha Chung, but rather for her reaction to a coughing child in the audience. The musician stopped the performance and, from the stage, berated the parents.

It wasn’t the first time that someone in the classical music world has reacted strongly to a coughing audience member, and it likely won’t be the last. At a Chicago performance in 2012, a symphony conductor interrupted by coughing audience members left the stage between movements; when he returned he tossed a handful of lozenges into the crowd. A few years later and less congenially, Maestro Riccardo Muti brought his orchestra at the same music hall to a silent halt mid-performance when several audience members were coughing.

Though classical music performances don’t necessarily prompt itchy throats, it’s possible that audiences experience a contagious coughing effect that is more psychological than it is physical.

After all, merely broaching the subject can have an effect: "It is common knowledge that if you talk about coughing you are more likely to start clearing your throat and then cough,” says Ron Eccles, director of the Common Cold Centre at Cardiff University in Wales. Eccles doubts that people cough more at concerts than in other contexts. But if a theater is cold and dry from air conditioning, he adds, the environment could encourage both increased coughing and sneezing.

Why We Wheeze (And How to Suppress It)

Coughing is an important reflex that helps clear germs, mucus, microbes and foreign particles from your throat and airway. It is essentially the body’s way of shielding the lungs from inflammation and infection. So, if you need to cough, you should, Eccles says.

But if you find yourself holding it in for etiquette reasons, it’s not necessarily harmful. “There’s not much risk unless you are holding your cough for days rather than minutes,” he says. “The risk of infection is only associated with patients who have a suppressed cough reflex and this is a chronic condition over months.”

Eccles adds that it’s very difficult to suppress a cough, and most people reach a breaking point after a few minutes. If you want to delay that breaking point, try a hard candy or a lozenge, says Eccles. “Sucking a lozenge helps suppress cough because it promotes salivation and swallowing and the act of swallowing suppresses the cough reflex. Saliva can also lubricate an inflamed pharynx.”

Menthol or peppermint lozenges can be helpful for inhibiting coughs. But any kind of hard candy may do the trick. A 2012 Pulmonary Pharmacology and Therapeutics study suggested that cough syrups with and without medicating ingredients work almost equally as a cough suppressant. To quiet their audiences, the Chicago Symphony Orchestra provides cough drops free of charge.

Beyond politeness, holding in coughs can have public health indications. Coughs can propel germs as far as six feet at speeds close to 50 miles per hour. So, holding in a cough caused by the common cold in a crowded area may help prevent the spread of infection, says Eccles, who adds that in the current pandemic the cough has gotten a particularly bad rap. Coughs have been “stigmatized as dangerous to others which is a pity for those with chronic cough unassociated with any infections such as COVID.”