Blue light gets a bad rap these days. Many people are turning to special glasses to protect their eyes from digital screens. But do they really work? 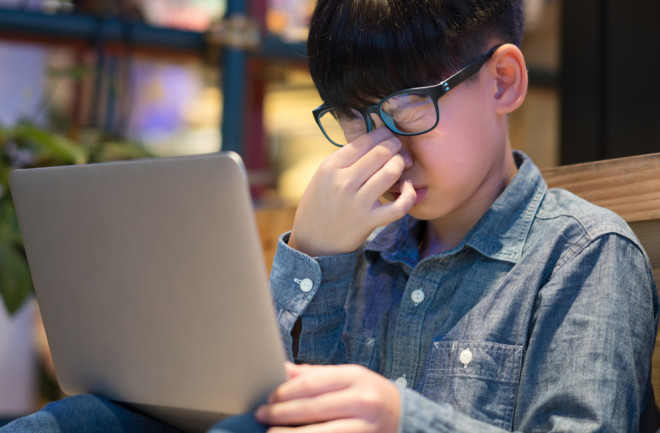 You probably thought screens were a big part of life before. Then, the pandemic hit. The endless Zoom calls, video meetings and Netflix binges can leave some with tired or dry eyes. Blue-light-blocking glasses are marketed as a solution to that very problem — particularly now that we're immersed in screens more than ever. The product claims to minimize how much "blue light" wearers are exposed to. It's one part of the visible light spectrum emitting from digital screens, and it's the supposed culprit behind your ocular woes.

“When they came out, there wasn’t much evidence whether they were actually effective or not,” says Mark Rosenfield, a vision researcher at the SUNY College of Optometry. “Now I think there’s pretty strong evidence that they’re not effective.”

The alleged relationship between blue light and tired eyes lacks a scientific explanation. Beyond that, many studies have found that blue-light-blocking glasses don’t actually alleviate the symptoms of too much screen time. But there are still other tried-and-true solutions out there.

Called “digital eye strain,” there are a suite of symptoms some people experience when staring at screens — like headaches, tiredness, and blurred vision. These have been complaints since computers first appeared in the workplace. Though annoying, the symptoms don’t appear to lead to any long-term consequences for your vision, Rosenfield says.

Blue-light-glasses claim to alleviate those symptoms by, well, blocking your eyes from exposure to blue light. The range of wavelengths that make up blue light sit on the edge of the visible light spectrum, just after ultraviolet — or UV — rays. Blue light beams down on Earth as part of sunlight, and it shines up onto our faces when using phones and computers. LED lights, one of the main components of modern screens, emit relatively high levels of blue light compared to other kinds of bulbs.

Researchers have known for a long time that UV rays can damage our eyes and skin. And some studies suggest that blue light rays could interfere with healthy cell functions, too. But for now, it’s not clear where the line lies between wavelengths that damage skin and eye tissue and wavelengths that don’t, Rosenfield says. However, the amount of blue light coming out of our devices is tiny compared to what we deal with in nature. “We get about 1,000 times more blue light from the Sun than anything we get from a device,” Rosenfield says. If there was blue light-induced harm to worry about, it wouldn’t revolve around our habits with our screens.

However, blue-light-blocking glasses are sold on that premise — that somehow, the blue light from screens is triggering headaches or dry eyes. Since the products hit the market several years ago, many studies have tried to see if the glasses alleviate the symptoms people complain about when using digital devices. The research treats the glasses almost like they’re an experimental medication. People enrolled in the study are given either a pair of fake plastic glasses or a pair of blue-light-blocking lenses and aren’t told which one they have. Later, they're questioned about their symptoms. Reliably, researchers have found that those with the blue-light-blocking glasses aren’t any less likely to complain of eye strain when the study is over.

For Rosenfield and other scientists, these results make sense. There’s no biological explanation for why blue light would induce eye strain. The supposed connection comes from combining two unrelated details about our devices, Rosenfield says. (That they cause digital eye strain and emit blue light.) “You could say most phones are rectangular and phones cause eye strain, so therefore, it’s the rectangular shape of the screen that causes the eye strain,” he says. That statement would work along the same faulty logic that blue-light-blocking eyeglasses do.

Of course, the eye strain people experience is very real. Those issues likely stem from other digital device issues besides the colors that dominate the displays. For example, we tend to blink less often when looking at screens. In one study, people dropped from about 18 blinks per minute down to about three and a half when they switched to looking at a screen. Some researchers think that trying to focus on an entire screenful of information, which people may or may not be viewing in the best conditions for legibility, could force us to blink less often as a way to improve focus. No matter the cause, one solution might be eyedrops, Rosenfield says.

It’s also possible the eye strain and headaches occur because your glasses aren't appropriate for screen use. If you are in your 40s and use bifocals, that means your eyes have lost some flexibility and have a harder time reshaping to accommodate looking at items near and far. The extra lens in your glasses is meant to assist your eyes in reading close-up text, but is typically calibrated for print, Rosenfield says. In other words, for a distance that's about 16 inches from your face. We read digital text as close as nine or 10 inches away. Getting another pair of glasses meant to work with your screen distance could help address that. And on that note: Most people get too close to laptops or phones, Rosenfield says. Aim to keep them about two feet away.

If your only issue after a long day in front of the computer is that you struggle to sleep at night, then blue light glasses might be what you’re looking for. Light exposure can tamp down melatonin — or “sleep hormone” — production in the brain. Blue light wavelengths in particular seem to have the most drastic dampening effects. The most straightforward remedy to this problem would be to put away screens at least two hours before bedtime, Rosenfield says. If that’s not an option, then pop on some blue-light-glasses in the evening or switch your devices to “night mode.” This setting lowers blue light in favor of less-disruptive red and orange hues.

Putting your device in a drawer a whole two hours before bed might sound rough, but who knows, it could have other benefits, too. Rosenfield keeps all phones out of the bedroom, which comes in handy when a student apologizes for sending an email at 2:00am. "You can send it any time you like," he says, "because I'm not looking at it."

More From Discover
Health
Less Sleep Linked to Increased Sugar Consumption in Teens
Health
Chicken Noodle Soup Really Can Help When You're Sick
Health
Calorie-Restricted Diets May Not Live Up to the Hype
Health
Alzheimer’s Drug Approval Sparks a Firestorm
Health
After a Night on the Town, He Couldn't Take a Full Breath. Then Things Got Much Worse
Health
The Science Behind Your Chakras
Recommendations From Our Store
My Science ShopDiscover STEM Kits
My Science ShopDiscover 2022 Calendar
My Science ShopStrange Science
My Science ShopElements Flashcards
Shop Now
Stay Curious
Join
Our List