We Burn More Calories in the Afternoon and Evening, Study Finds 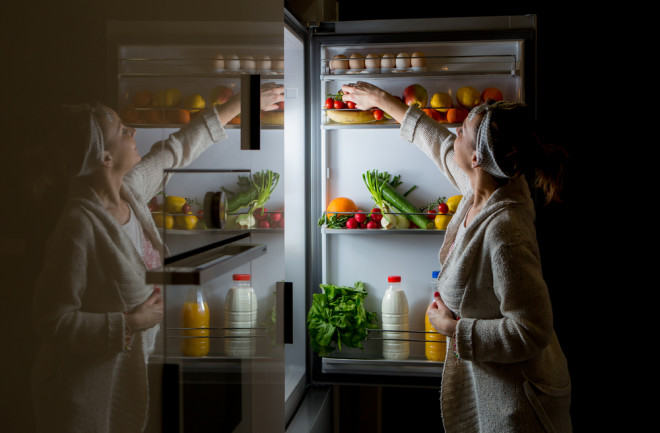 A new study finds that an imbalance between one's circadian rhythm and eating and sleeping habits may contribute to weight gain. (Credit: Pakula Piotr/Shutterstock)

Our weight might not be controlled solely by what we eat. When we eat, and when we get to sleep, may be just as important.

A small study published this week in Current Biology found people who had been thrown off their circadian rhythms burn more calories in the late afternoon and evening hours than in the morning, when calorie burn is at its lowest. Later in the day, calorie burn increases by 10 percent, or about 129 calories.

Throwing off the Clock

To study how metabolism changed — independent from the effects of diet, exercise and the sleep-wake cycle — researchers kept the study’s seven participants in a lab isolated from outside influences. For 37 days, participants lived in windowless rooms without clocks, phones or the internet. Their food intake was carefully controlled and calorie-burning exercise was avoided. To throw off their internal clocks, assigned bedtimes each night were four hours later than the previous night — the equivalent of circling the globe and crossing all of its time zones over the course of a week.

“Their body’s internal clock could not keep up, and so it oscillated at its own pace,” said study author Jeanne Duffy, a neuroscientist in the Division of Sleep and Circadian Disorders at Brigham and Women’s Hospital. “This allowed us to measure metabolic rate at all different biological times of day.”

The exact timing of peak calorie burn varied from person to person, but clear patterns suggested that a circadian rhythm is involved. Scientists believe our resting metabolism — the amount of energy used to maintain essential body functions like breathing or brain activity —  is regulated by our body’s circadian system. We know that many other physiological processes — such blood pressure or hormone secretion — are also governed by 24-hour biological cycles.

Researchers observed that calorie burn was lowest in the late biological night when the body’s core temperature falls. Calorie burn was highest about 12 hours later, in the biological afternoon and evening hours. The biological time of day refers to the times our bodies naturally recognize as sleeping and wakeful hours — biological morning is the hours after we wake up, no matter what time of day that actually is.

Respiratory quotient, which reflects the body’s use of carbohydrates and fats, also appeared to follow a circadian rhythm. It was lowest in the biological evening and highest in the morning. They also found the body appears to favor carbs as fuel in the morning and fats in the evening.

The researchers do note, however, that their findings for the moment just relate to people who’s circadian rhythms have been thrown off — they weren’t able to test whether people with normal sleep schedules burn more calories in the evenings.

It’s unclear how a broad population might use the study’s findings to control weight. However, the researchers said that being out of tune with circadian rhythms could lead to additional weight gain.

“It is not only what we eat, but when we eat — and rest — that impacts how much energy we burn or store as fat,” Duffy says. “Regularity of habits such as eating and sleeping is very important to overall health.”

The research team plans to explore how appetite and the body’s response to food vary based on time of day, as well as how sleep influences those responses.

More From Discover
Health
Are Ultra-Processed Foods a Silent Killer?
Health
Will the COVID-19 Vaccine Work As Well in Patients With Obesity?
Health
We've All Heard That Eating Late Is Unhealthy. Is It True?
Health
What Is Lumen, and Can It 'Hack' Your Metabolism? Here's What the Science Says
Health
What Is Inflammation, and Why Is It Sometimes 'Bad' for Your Health?
Health
Cancer Is on the Rise Among Young People
Recommendations From Our Store
My Science ShopCosmos: Possible Worlds
My Science ShopStrange Science
My Science ShopEinstein's Universe
My Science ShopElements Flashcards
Shop Now
Stay Curious
Join
Our List