We All Scream for…Ice Cream! 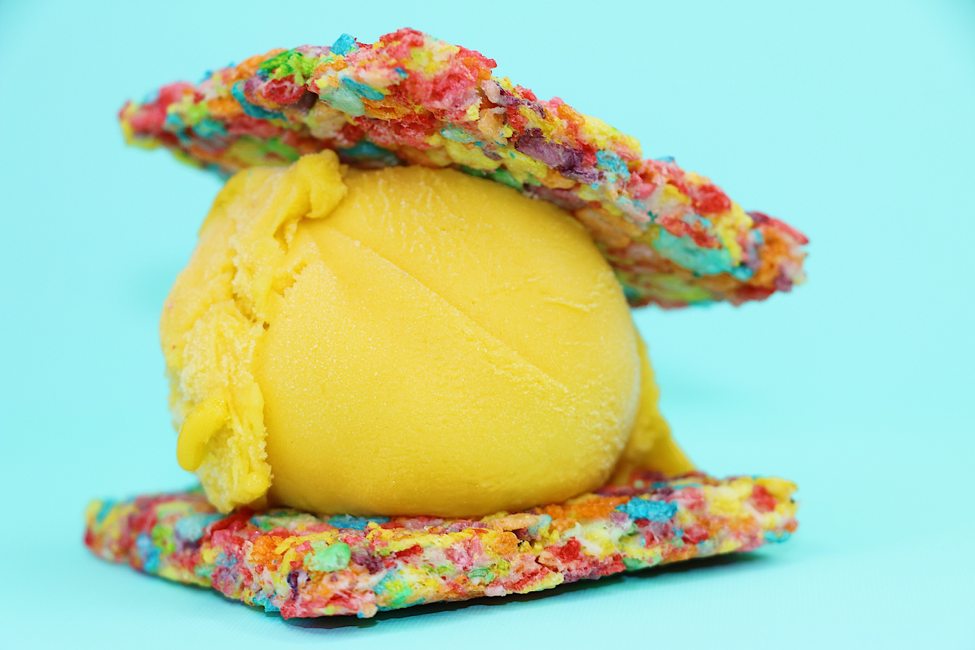 Photo Credit: Coolhaus As the peak of summer approaches, we here at Science & Food love to reach for one of our favorite frosty treats: the ice cream sandwich. Being true Science & Foodies, we started to wonder about this amazing composite material- how do you get the coexisting chewy cookie yet firm ice cream? We began to search for answers by turning to Natasha Case, founder of the Los Angeles favorite “Coolhaus” which serves gourmet ice cream and ice cream sandwiches. Trained as an architect at both UC Berkeley and UCLA, Natasha merged her experience as an architect with her passion for food in the ideation of Coolhaus. Starting with food trucks and storefronts in LA, Coolhaus is now sold in nationwide grocery stores such as Whole Foods. We asked Natasha what the main factor is that contributes to the science of ice cream. Her response? Surprisingly, it is air! The amount of air incorporated into ice cream is referred to as overrun [1] and is calculated by this equation [2]: % Overrun = [(Volume of ice cream produced-Volume of mix used)/Volume of mix used] x 100% For example, if we started with 10 gallons of ice cream mix and had 15 gallons of finished ice cream at the end, the overrun calculations would be as such: 15-10 = 5 and 5/10 = 0.5. 0.5 x 100% = 50%, meaning there is 50% volume, or the volume has increased by 50% as a result of the addition of air [2]. Air is crucial in ice cream: air bubbles contribute to ice cream mouthfeel in addition to the use of butterfat. The texture of frozen desserts such as gelato and ice cream depends on this interplay between fat and air. Gelato typically has about 10% butterfat and 20-30% overrun [3] while ice cream can have up to 16% butterfat and 30-50% overrun [4]. With 12-14% butterfat and a low overrun, Coolhaus technically produces “gelato style” ice creams [5]; this is one of the key components to the success of the Coolhaus ice cream sandwich.

igure 1: Stabilization of air cells by fat in ice cream. (Photo Credit: Molecular Recipes) While air content contributes to ice cream texture, it also affects how quickly ice cream melts. Typically, more air results in ice cream that melts more quickly [5]. Ever notice how when you buy the budget brand ice cream it starts melting almost instantly? This is because budget brands of ice cream typically increase their overrun to decrease ingredient costs – it’s cheaper to fill a half gallon tub with more air than cream! So how does increased air content result in a faster meltdown rate? To answer this question, we need to consider the small-scale structure of ice cream. Ice cream is a colloid, or a solution that is comprised of two insoluble materials with one dispersed throughout the other. When ice cream is churned, it breaks up the ice crystals formed by water to give the ice cream a smooth texture. Churning also causes the fat globules in the milk and cream coalesce and allow for the dispersion and stabilization of air throughout the ice cream. Because fat is hydrophobic, it prefers to align itself closer to the air bubbles rather than the ice crystals. Therefore, the texture of ice cream is a result of the interplay between these air bubbles, ice crystals, and fat globules [4]. Now, let’s consider what happens when ice cream melts. Melting involves factors such as air cells, ice crystals, and fat globules and the stability of these air cells is one of the largest factors that affect meltdown rate [6]. Air cells are formed in ice cream due to shear stress during churning. Fat globules partially coalesce and form a network around the air cells (Figure 1) that prevent agglomeration and disperse the serum phase around the ice crystals, thus preventing ice crystal collisions that would lead to accelerated melting [1]. Therefore, the ratio of fat : air must be sufficient to prevent the agglomeration, and lower amounts of air will allow for this. Thus, by decreasing the overrun, you can achieve a slower-melting ice cream that stays in your sandwich longer.

Figure 2: Freezing in pure solvent (A) vs. in a solution. (Photo Credit: Seville International College) So we’ve solved the mystery of the filling, but what about the oh-so-chewy cookie that gives the extra oomph to Coolhaus’ sammies? Natasha gave us the scoop – Coolhaus uses pectin. Though the precise combination of ingredients is proprietary, we postulate that the pectin serves as a thickening and stabilizing agent that allows the cookie to remain chewy despite sub-zero temperatures. Pectin is a polysaccharide contained in plant tissue [7]. As the pectin binds water, it causes freezing point depression, a phenomenon that occurs when a solute is dissolved in a solvent. As a solute is dissolved, it interacts with water molecules, thus interfering with the attractive forces between water molecules that cause them to interact and become a solid (Figure 2). Thus, in order to achieve an ordered state, the freezing point must be lowered even further to decrease particles’ kinetic energy enough that they can no longer overcome the interparticle attractive forces and become frozen [8]. In this manner, pectin lowers the freezing point of the water in the cookie, preventing the formation of ice’s crystalline structure that leads to hardness. For more about pectin, check out a previous S&F article on Citrus Suprême. 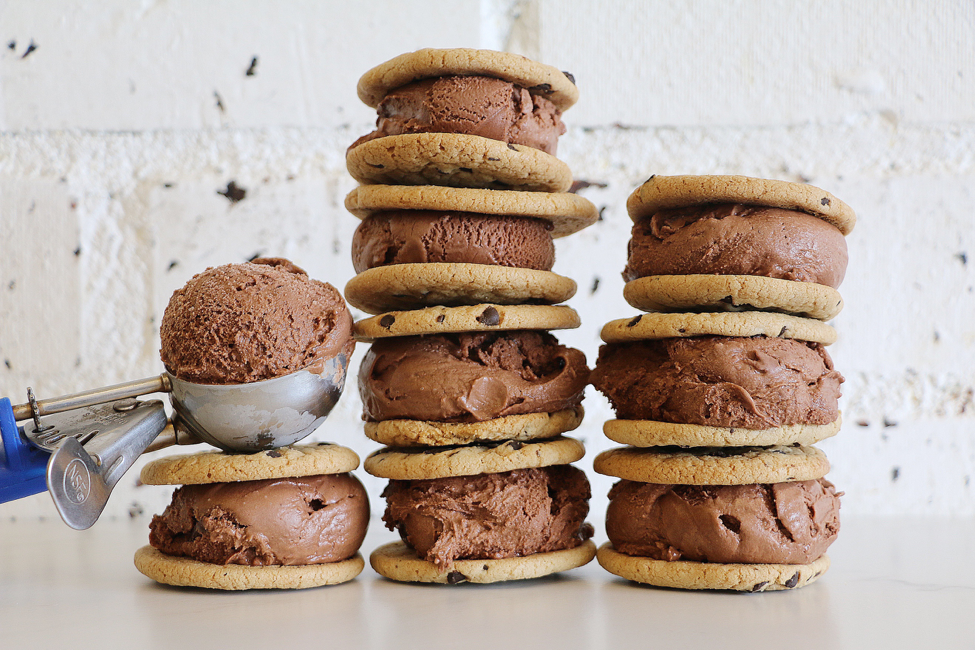 Photo Credit: Coolhaus In her search for confection perfection, Natasha has one goal in mind with the science behind her ice cream sandwich: to evoke emotional reactions that link to memories and nostalgia. “Flavor is generally conceived to be an instinctual or emotional aspect of taste, but when you can also get into the understanding of it from a scientific standpoint you can actually, to an even further degree, elevate that emotional or instinctual side by knowing what is actually creating those sensations on your palate, mind, and in your soul.” –Natasha Case References Cited: