Want to increase your fertility? Try wearing a kilt! 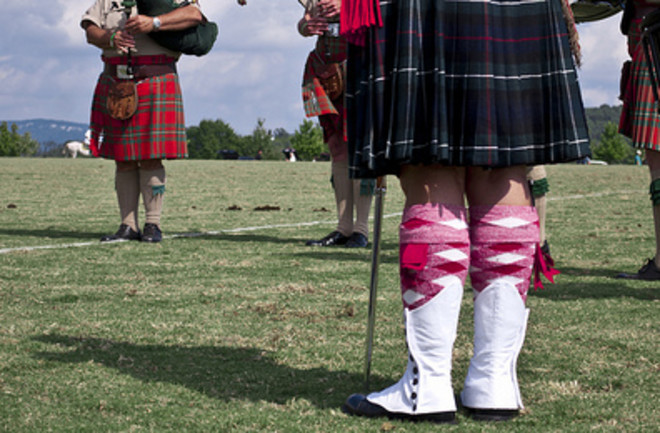 As we've reported previously, heat is really bad for sperm -- to the extent that a polyester scrotum sling is actually an effective form of contraception. So it's probably not surprising that the opposite might be true: that not wearing underwear at all might be a fertility booster. Enter this author, who argues that traditional Scottish kilts (and perhaps other traditional skirt-like garments) may have originally arisen because they reduce scrotal temperature and thus increase fertility. Any volunteers out there want to help test this hypothesis?

'Real men wear kilts'. The anecdotal evidence that wearing a Scottish kilt has influence on reproductive potential: how much is true? "BACKGROUND AND AIMS: There are anecdotal reports that men who wear (Scottish) kilts have better sperm quality and better fertility. But how much is true? Total sperm count and sperm concentration reflect semen quality and male reproductive potential. It has been proven that changes in the scrotal temperature affect spermatogenesis. We can at least affirm that clothing increases the scrotal temperature to an abnormal level that may have a negative effect on spermatogenesis. Thus, it seems plausible that men should wear skirts and avoid trousers, at least during the period during which they plan to conceive children. METHODS: and results Analysis of literature concerning scrotal temperature and spermatogenesis and fertility. Wearing a Scottish kilt in a traditional ('regimental') way may have clear health-related benefits. Kilt wearing likely produces an ideal physiological scrotal environment, which in turn helps maintain normal scrotal temperature, which is known to be beneficial for robust spermatogenesis and good sperm quality. CONCLUSION: Based on literature on scrotal temperature, spermatogenesis and fertility, the hypothesis that men who regularly wear a kilt during the years in which they wish to procreate will, as a group, have significantly better rates of sperm quality and higher fertility." Related content: Women are more likely to wear red or pink at peak fertility.Is it physically possible for a man to sire over 800 children?Flashback Friday: Finally, a male contraceptive: behold the ball cozy!