Vital Signs: And Down She Goes

When a woman collapses in the waiting  room, a doctor acts swiftly to diagnose and treat a potentially fatal condition. 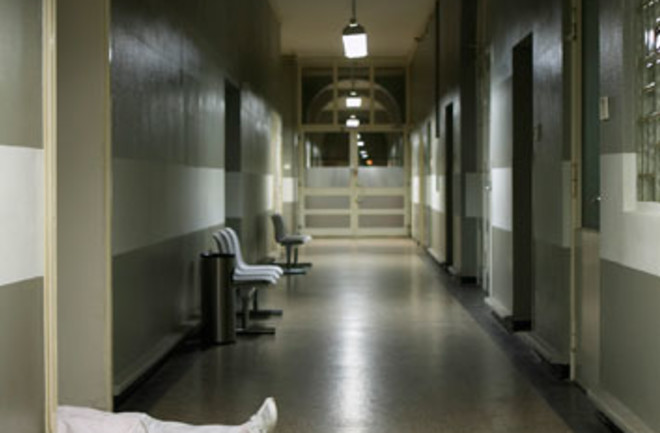 One-third of all people will experience fainting in their lifetime. | Corbis

One morning as I looked out at the busy waiting room of my internal medicine practice, I watched a new patient, a trim, healthy-looking young woman, check in. Neatly dressed and in no obvious distress, she turned from the reception counter—and without warning collapsed onto the carpeted floor. No cry. No clutching of her chest or head. No weak-kneed stagger as she tried to make it to an empty chair. She just went down on the spot.

I ran around the counter out to the waiting room, unwrapping my stethoscope from my neck as I went. “A-B-C,” I thought to myself: airway, breathing, and circulation, the first three things you check when someone collapses like this. Within seconds I was kneeling next to the woman. My fingers found a regular pulse alongside her windpipe, and I saw that she was breathing without difficulty. Relieved this was not a cardiac or respiratory arrest, I released my own breath and watched as she opened her eyes. “Are you all right?” I asked.

She focused on me and said yes. But her wispy voice suggested otherwise, so I observed her closely in case she started to pass out again. We were both oblivious to the audience of other patients glued to their seats watching us, each one silently deciding that his or her cough or rash could wait.

A few moments later, the young woman sat up, alert. The whole event lasted no more than a minute. Her abrupt loss of consciousness followed by rapid recovery led me to the tentative conclusion that she had just experienced an episode of syncope, popularly known as a faint. My nurse and I helped our young fainter to her feet and walked her to an exam room.

The culprit in nearly all cases of syncope is an interruption in blood flow to the brain. The most common type, accounting for nearly half of all cases, is the vasovagal faint, during which the vagus nerve (a cranial nerve that helps regulate heart rate and blood pressure) sends signals that dramatically slow the heart. The signals can be provoked in susceptible people by distress they feel at the sight of blood or when they experience some other upsetting or threatening event. When your heart beats too slowly, it can’t sustain the blood pressure needed to feed oxygen to the brain, and down you go. Although we don’t know why some people are more susceptible than others, it occurs more often in females.

Cardiac rhythm disorders account for another 10 percent of all faints. Originating within the heart itself, unrelated to brain signals or emotional distress, these arrhythmias can disrupt blood flow. Whether causing the heart to beat much too quickly or far too slowly, the common denominator in these abnormal rhythms is low cardiac output, resulting in insufficient blood flow to the brain. As we walked back to the exam room, I asked my new patient if she had a history of heart problems or if she had experienced palpitations (skipping or racing of her heartbeat) prior to fainting. Her answer to both questions was no.

Yet another 10 percent of faints are caused by orthostatic hypotension, a precipitous drop in blood pressure that occurs when a person stands up. We all experience a mild version of this whenever we rise too quickly and feel slightly woozy. Normally we recover rapidly because evolution has equipped our bodies with a physiological control mechanism that prevents all our blood from draining into our ankles when we are standing. But if this mechanism doesn’t function properly, blood deserts our heads and follows gravity into our feet. Neuro­logical disorders like Parkinson’s disease—along with certain drugs, including some anti-hypertension medications—can blunt the responsiveness of this system. Orthostatic hypotension also occurs if the circulatory system is not fully expanded, which might happen when you are dehydrated or have had serious blood loss.

Finally, in nearly 2 percent of cases the cause of syncope remains undiagnosed.

Seated on the end of the exam room table, the young woman seemed dull and distracted. She was nevertheless able to tell me that the night before, she had come home late and snacked on some raw sweet peppers. “They tasted odd,” she said. “I thought it was because they’d been left sitting out on the kitchen counter for a few days.” She noticed her lips tingling, and the next morning she awoke feeling vaguely unwell. She decided to drive to the office of a physician her girlfriend had recommended. That was me.

When my nurse looked up from the blood pressure cuff wrapped around my patient’s arm and told me that she couldn’t find a pressure, I knew why my patient was less than sparkling: Too little blood was flowing to her brain. I rechecked the blood pressure by listening with my stethoscope in the crook of her elbow and confirmed that there was no audible pressure. Using my fingers on the pulse at her wrist, I could palpate her systolic pressure. (The top number in any blood pressure reading, systolic measures the maximum pressure of the waves generated by the beating heart.) Normal systolic pressure is 120. Below 90 is very low; less than 80 and you’re in shock. Hers was 70.

I immediately had my patient lie down on the exam table to improve circulation to her brain and rechecked her blood pressure. It was still only 80. During prolonged shock, circulation is inadequate to deliver oxygen to your tissues for hours on end, and multiple organs can shut down. It is a life-threatening emergency. I told my staff to call 911.

My best guess was that my new patient was in anaphylactic shock, a severe allergic reaction mediated by the body’s immune system. Reactions to allergic triggers may be mild or may rapidly progress to respiratory or cardiovascular collapse and death. Sometimes a reaction evolves over hours. The allergic triggers are usually food (especially nuts and shellfish, but also peppers), medications, or insect stings. The symptoms typically involve the skin (hives, flushing, itching) and may also include the respiratory system (wheezing with respiratory failure) and the cardiovascular system (low blood pressure and shock).

When an anaphylactic reaction hits, a flood of chemicals, primarily histamine, are dumped into the bloodstream. Produced by specialized blood cells that respond to injury, infection, or allergic triggers, histamine is normally released locally in tissues as part of the body’s defense mechanism. But during anaphylaxis this response goes haywire. When large amounts of histamine pour into the circulatory system, blood vessels lose their elastic tone and get leaky. Floppy, leaky blood vessels fail to squeeze down when you are upright, so blood pools in your extremities instead of flowing back to the heart. Cardiac output falls and blood pressure drops, leading to shock. That’s why my patient fainted. In severe reactions, patients may experience shock even while lying down.

The combination of tingling lips, which can be part of an allergic response, and dangerously low blood pressure is what tipped me off to the anaphylaxis. It’s a diagnosis made purely on clinical grounds; there is no time to wait for confirmatory blood tests, since it can be fatal if not treated promptly. Although there are other causes of shock, if there is any reasonable suspicion of anaphylaxis, it’s always better to treat first and ask questions later.

I shoved some pillows under my patient’s legs to get them elevated, hoping to increase blood return to her heart and brain. I injected a dose of epinephrine (adrenaline) from our office emergency kit into her thigh muscle. Adrenaline quickly restores tone to the blood vessels and ramps up the strength and speed of cardiac action. Next I started an IV and flicked the control valve to wide open so that saline would run into her vein as quickly as possible and help restore the volume of liquid circulating through her arteries. My nurse placed tubing under the patient’s nose to maximize the amount of oxygen her blood would deliver to her tissues.

By the time the paramedics had her on their gurney ready to be transported to the ER, my patient’s blood pressure was up to 90. Two hours later, the ER attending physician called me to say that her pressure was normal and she was doing fine. Doctors planned to keep her there for observation for the rest of the day to be sure the reaction had blown over.

So was it the sweet peppers that had started this nearly lethal chain of events? Perhaps, but only allergy testing could tell for sure. The patient would need to see an allergist and would also need to carry an emergency dose of injectable epinephrine at all times in case of another reaction. In the meantime, the doctors advised her to hold the peppers.

H. Lee Kagan is an internist in Los Angeles. The cases described in Vital Signs are real, but names and certain details have been changed.