Video Games vs. the Aging Brain

How a mental gym can tone your mind and stave off memory loss. 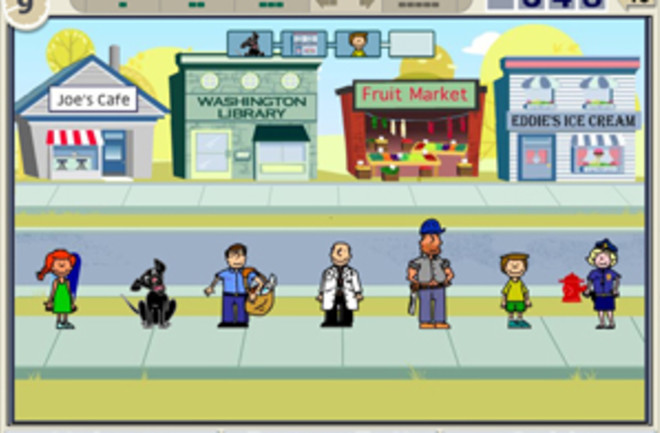 In his twenties, Mike Merzenich dreamed of mapping the neurobiology of the soul. “I was interested in the genesis of the self,” he says. “It’s the kind of thing you think about when you’re young and dumb.” Four decades later, he has scaled back his ambitions. Now a graying 64, he hopes merely to reverse the toll of aging on the brain and cure schizophrenia. Without surgery or drugs.

The Brain Fitness Program developed by Michael Merzenich and his colleagues at Posit Scienceinvolves solving tasks displayed on a computer. For example, the top image relates to recallign a list of errands by the different people shown on the street. The bottom image concerns a task that involves comparing soundsand identifying the ones that are similar. | NULL

Merzenich, a neuroscience professor at the University of California at San Francisco, aspires to “fix” brains with a series of innovative computer programs that he and his colleagues have designed, most notably his new Brain Fitness Program to help buff up gray matter that has turned flabby with age. The technique relies on a process called plasticity—the brain’s innate capacity to reshape itself and even increase its complexity throughout a lifetime, depending on experience. Merzenich’s faith in harnessing plasticity could change the way we think about mental health.

“We’re going to revolutionize the way an older person looks at the end of life,” he vows.

The concept of brain plasticity first came into vogue in the 1960s and 1970s. Back then, it referred mainly to the major developmental leaps seen in very young brains. Scientists assumed that adult brains were entrenched in their operating modes. Over the past two decades, however, a wave of studies—including Merzenich’s own seminal research on monkeys—has shown that adult brains can also significantly change, producing new and modified interneuronal connections and even a limited number of new neurons. Although these changes are far less striking than those in young brains, the potential has inspired a burst of optimism about the human condition and launched a new era of neuroscience.

The genial, stocky Merzenich is this era’s foremost apostle. “He’s the father of neuroplasticity research,” says UCLA research psychiatrist Jeffrey Schwartz, who has written widely on the topic. Merzenich may also be its most prolific entrepreneur, as he shuttles between his university lab and the two companies he has cofounded: the Scientific Learning Corporation in Oakland and Posit Science in San Francisco. His sometimes awkward straddling of the corporate and nonprofit worlds has placed him squarely in the middle of a heated debate over the issue of conflict of interest in the research world. Some colleagues, even while lauding his seminal early work in brain plasticity, charge that he cannot be objective about his research while promoting the fruits of it. The counterargument is that research advances do not matter unless they reach the people they are supposed to help, and Merzenich has been extraordinarily successful at making that happen.

The first of his companies—the Scientific Learning Corporation, launched in 1996—markets Fast ForWord, a much-publicized computer regimen for children with learning disabilities. Merzenich coinvented Fast ForWord with Rutgers University neuroscience professor Paula Tallal and her university colleagues. The original software and its sequels have since been used by more than 800,000 children in 22 countries, bringing Scientific Learning some $40 million in revenue in 2005.

But Merzenich’s greatest commercial hit could come with a $395 treatment called the Brain Fitness Program, marketed by Posit Science, in which he has a minority interest. If clinical tests currently under way confirm his predictions, the treatment could become a must-have for many of the 77 million baby boomers in the United States alone, who are already on Orange Alert for any minor memory lapse that might foreshadow cognitive breakdown. The first of these boomers turned 60 last year. Many of them have already watched their parents decline and are eager to do whatever they can to avoid joining the more than 50 percent of Americans who end up with significant cognitive impairment, including full-blown dementia, by age 85.

More From Discover
Health
Humans Are the Only Animals That Cry — And We Don’t Know Why
Health
Taking a Vacation Might Save Your Life
Mind
There's an Evolutionary Advantage to Blushing
Health
When Summertime Is a SAD Time
Mind
Why Do People Love Getting Compliments?
Mind
Why Alone Time Carries a Stigma (Even If It Feels Great)
Recommendations From Our Store
My Science ShopDiscover STEM Kits
My Science ShopDiscover 2022 Calendar
My Science ShopStrange Science
My Science ShopElements Flashcards
Shop Now
Stay Curious
Join
Our List