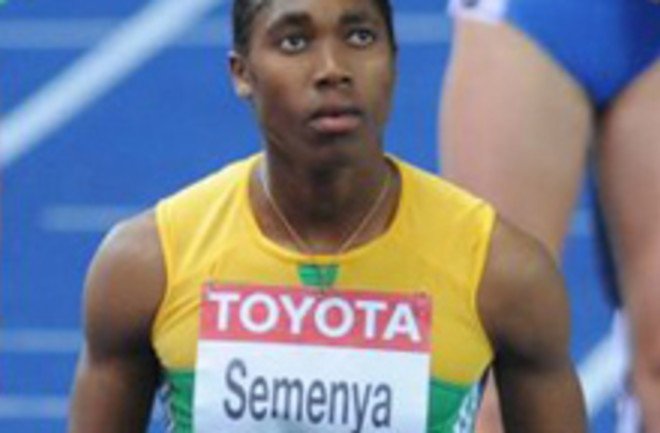 Trouble is mounting for the South African athlete who was suspected of having an unfair advantage in women's track events because of male characteristics. After 18-year-old Caster Semenya thumped the competition at an 800-meter race in Berlin, sports officials announced that Semenya would be subjected to a battery of tests to determine her gender. Now, unconfirmed sources have reported that the tests showed Semenya has both female and male reproductive organs, and her future in women's sports is in doubt. Newspapers in Australia reported that while Semenya's external genitalia is female, she doesn't have ovaries and instead has internal testes that produce the hormone testosterone. If the reports are accurate, Semenya probably benefited from that hormone boost by gaining muscle mass. But it

now seems clear that there is no disciplinary action to be taken, because even if Semenya has high male hormone levels, it is not because of medical cheating. But that leaves a moral and ethical quandary and a medical issue which anyone else in the same position would be able to work out in private - for Semenya, it is all public [ABC Sport].

Experts says that based on the information reported, Semenya may have a condition called androgen insensitivity syndrome, in which the fetus develops functional testes, but then stops developing male characteristics.

As a result, the baby develops down the "default" female route. The testes are there but usually do not descend and remain hidden in the body and the condition does not become apparent until adolescence when the girl does not start her period [BBC News].

Medical experts also note that internal testes can grow malignant tumors, and say that some doctors advise removing them as a precautionary measure. The International Association of Athletics Federations has refused to confirm or deny the reports that Semenya is intersexed (a broader and more respectful term than the outdated term "hermaphrodite"), and says an official ruling will be issued in November. The authorities are likely to rule in one of three ways, says BBC sports expert Gordon Farquhar:

. Meanwhile, Semenya has withdrawn from a race scheduled for this weekend in South Africa. The athlete has the complete support of her country, however. South African officials have warned

of a "third world war" if the row over her sex stops her competing.... South Africa's sports minister, the Reverend Makhenkesi Stofile, said: "Caster is a woman, she remains our heroine. We must protect her" [BBC News].

Nick Davies, a spokesman for the IAAF, says that Semenya will probably keep the gold medal she won in Berlin

because the case was not related to a doping matter. "Our legal advice is that, if she proves to have an advantage because of the male hormones, then it will be extremely difficult to strip the medal off her, since she has not cheated.... She was naturally made that way" [AP].