Turkeys: To Brine or Not to Brine? 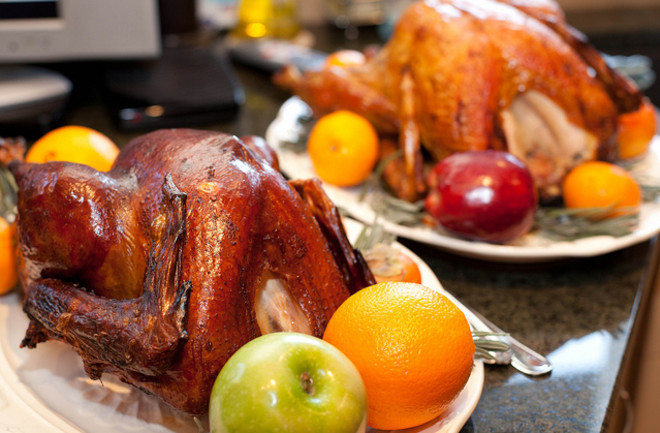 Amidst the assortment of homemade pies and pillowy mashed potatoes, a moist, flavorful turkey is the hallmark of any traditional Thanksgiving. We’ve all been guilty of it though—feigning enjoyment while choking down tough, dry turkey that can’t be salvaged with even the most decadent of gravies.

Brining offers a magic solution to your Thanksgiving turkey woes. Brining is a simple technique that can promise your turkey a coveted, juicy tenderness. To brine a turkey, you immerse it in a solution of 3-6% salt by weight, for anywhere from a few hours to two days. After cooking, your meat will be noticeably juicier. This transformation isn’t just your turkey absorbing fluid like an enormous meat sponge, but is instead an intricate interplay of diffusion, osmosis, and protein biochemistry.

Meat proteins typically respond to heat by unraveling like balls of yarn. Once unraveled, they tangle with each other and coagulate, causing the meat proteins to pack together more densely. This process forces water out, and coupled with the heat-driven evaporation of water, explains why meat shrinks when cooked. But when submerged in brine, meat is at the mercy of the salt molecules.

Salt molecules are small and mobile and can easily move through muscle proteins. As they diffuse through the turkey, they partially dissolve proteins and interact with the charges on them, preventing the proteins from packing as tightly together and altering the overall structure of the meat (1). The movement of salt also drives water into the meat proteins since water tends to move from a higher concentration (the brine) to a lower concentration (within the meat).

The combination of less tightly packed proteins and the gradient driving water in ultimately boosts the water-holding capacity of your turkey. As with any cooking method, brining has its pros and cons. While the meat it creates may be juicier, a common complaint is that it is unsurprisingly (and to some, unpalatably) salty. Brines typically start at around 3% salt by weight—comparable to ocean water at 3.5% salt by weight. The takeaway from all this: if you suffer from dry turkey mouth year after year, brining may be a viable option, but flavors in your turkey should otherwise be balanced and boosted.

About the author: Mai Nguyen is an aspiring food scientist who received her B.S. in biochemistry from the University of Virginia. She hopes to soon escape the bench in pursuit of a more creative and fulfilling career. Read more by Mai Nguyen