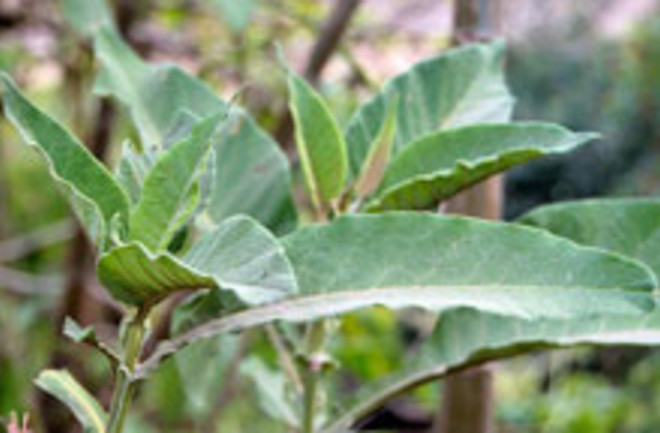 The tobacco plant is considered a villain of the plant world because of the harmful effects of smoking it. But now a genetically engineered tobacco plant is enjoying a moment of redemption, as scientists have discovered that tweaking a certain gene in one tobacco plant strain allows the plant to produce antibodies that disarm toxic pond scum. Treehugger reports:

The pond scum in question is microcystin-LR (MC-LR), which makes water unsafe for drinking, swimming and fishing in many parts of the world. Upon ingestion it can cause serious liver damage, with some studies indicating a connection to causing liver and colorectal cancers.

To counter this harmful algae, lead scientist Pascal Drake inserted genes into the tobacco plants to produce an antibody to the algae. The antibody was produced in the tobacco plant's leaves and secreted from its roots into the growth medium. When the toxin from the algae was added to the medium, the antibody immediately latched on to it. Discovery News reports:

"Binding to the pollutant might reduce its bioavailability," Drake said. "It might make it less dangerous and less likely to be taken up by animals and humans."

The scientists say this is the first example of a transgenic plant making an antibody that can fight an environmental toxin. But they note that for this research to be useful in the field, they would have to genetically tweak aquatic plants instead of tobacco plants. Related Content: 80beats: Tobacco Plants Can “Grow” a Vaccine to Fight Lymphoma

DISCOVER: By The Numbers: Smoke Gets in Your Hair