Experts say communities must massively scale up COVID-19 testing, with quicker turnaround times. New test innovations in the works promise to do just that. 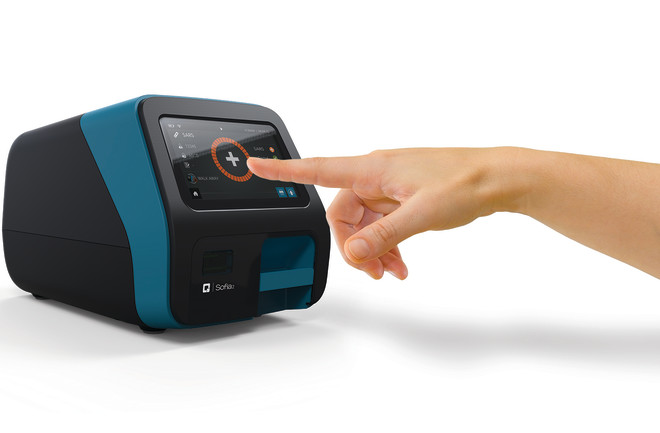 Antigen tests are a little less sensitive than PCR tests, but they make up for it in cost and ease of use. (Credit: Quidel Corp.)

In July, my brother planned a weekend trip to Michigan’s Upper Peninsula with friends. The week of the trip, they all decided to get tested for COVID-19. Everyone in the group got their (negative) results back within a few days — except my brother.

It took seven days for him to get his (also negative) results. By that point, the day he’d planned to leave had come and gone, and he’d decided to stay home. It was a hard call, but the right one. He could have been infected earlier in the week and not have known it.

It didn’t matter what the results were. By the time they arrived, they were obsolete.

Based on estimates from Harvard and the Rockefeller Foundation, the U.S. needs to administer at least 5 million tests per day with turnaround under two days to effectively contain COVID‑19 community spread. Currently, we’re at about 5 million tests per week, with an average turnaround of four days and many people waiting much longer.

We need a lot more tests, and we need them to be a lot faster.

To address those challenges, the National Institutes of Health launched its Rapid Acceleration of Diagnostics (RADx) initiative in April 2020. Sixteen proposals have so far met the program’s rigorous criteria to receive “phase two” funding, which provides support for scaling up production and clinical testing.

“Normally it takes five to six years to develop a diagnostic from concept to wide-scale dissemination,” says Bruce Tromberg, director of the National Institute of Biomedical Imaging and Bioengineering (NIBIB) and head of RADx’s technology division. The goal is to shrink that timeline from years to months using two strategies: processing lab-based tests with super-high efficiency, while introducing the option of less sensitive — but much faster — tests that can be done without a lab at all.

The current gold standard COVID-19 test uses a lab technique called polymerase chain reaction, or PCR, to look for SARS-CoV-2 genetic material in a patient sample. It’s a multi-step process. PCR detects DNA, but viruses’ genes are made of RNA, so the RNA is first extracted from the patient sample and converted into DNA. Then, primers — small pieces of DNA corresponding to a specific SARS-CoV-2 gene — come in and try to find that gene in the sample DNA.

If the primers find what they’re looking for, each match kicks off a series of chemical reactions that make copies of the gene, tagging each with a signal molecule. Each of these tags is like a single pixel in a photo — on their own they don’t look like much, but thousands of them together create a clear picture. Each round of copying doubles the number of pixels, so the more virus is present originally, the faster the picture comes together.

Although PCR is extremely accurate, it can take hours to confirm a positive result. That’s why five of the RADx grants are dedicated to boosting PCR test capacity using high throughput (HT) instruments, which can process many tests at once for maximum efficiency.

One company, Fluidigm, has created an “integrated microfluidic circuit” that miniaturizes each PCR reaction 50-fold to run 192 individual tests simultaneously on a platform not much larger than an iPhone. They aren’t stopping there: Tromberg says they’re developing a way to tell up to eight pooled tests apart, increasing capacity to 48,000 tests per day on a single instrument.

Another HT approach uses next generation sequencing (NGS) technology. Like PCR, it looks for SARS-CoV-2 gene markers, but NGS takes it further by reading samples’ genetic code and searching for multiple markers at once. By combining NGS with sophisticated automation, companies like Helix OpCo and Ginkgo Bioworks are creating facilities that can handle up to 100,000 tests per day.

Tests Brought to You

Another type of test now coming onto the market is point of care (POC) tests, which don’t need specialized labs. By design, they are inexpensive and easy to administer, which makes them ideal for routine testing to monitor COVID-19 community spread and catch asymptomatic cases.

Mesa Biotech’s Accula POC device runs 30-minute PCR tests by automating the entire process in a small cartridge. To save time, the RNA isn’t purified as thoroughly after it’s extracted from the sample, and the time allotted for each copying cycle is shorter compared with standard PCR.

A recent study comparing Accula with a standard PCR test suggested that Accula gave more false negatives. However, Benjamin Pinsky, associate professor of pathology at Stanford Medical School and one of the paper’s authors, says that doesn’t mean POC tests are useless.

“If you’re going to get one shot at diagnosing a person, then the test needs to be high specificity and high sensitivity.” For that, nothing beats standard PCR. But for community-level testing to catch asymptomatic individuals, he says, “There’s definitely a place for (point of care) assays.”

An even faster POC option is antigen tests. These tests don’t pull genetic material out of the virus. Instead, they use antibodies to grab proteins on the virus’ surface. Antigen tests use a disposable strip, similar to a pregnancy test. Part of the strip is coated with antibodies designed to recognize SARS-CoV-2. When a sample is applied, any virus in it will become stuck to the strip. Then, another solution of antibodies is applied; these are modified with dyes so that if they find any virus stuck to the strip and grab onto it, there is a visible signal. The whole process takes about 15 minutes.

Antigen tests have received criticism for their lower accuracy, but all four of the antigen tests with FDA emergency use authorization meet World Health Organization standards for POC testing. The RADx-backed test from Quidel Corp has a less than 4 percent false negative rate, about on par with Accula and tests for other viruses like influenza.

Emily Toth Martin, an epidemiologist at the University of Michigan School of Public Health, says trying to compete with PCR is perhaps an unnecessarily high bar for new tests. “Any test is going to look like it’s missing stuff if it’s being compared to PCR,” she says.

It’s more important at this stage of the pandemic that tests be decently effective and available than perfect and hard to come by. “I can see the argument for having widely available testing, weekly or a couple times a week,” she says, “But I don’t know where the test availability is going to come from.”

Realistically, Tromberg says, it will come from multiple sources. “We need a diversity of testing technologies to match different communities and their needs.” No single test can meet everyone’s needs, but the hope is that every test will meet someone’s needs, and the supply chain will be diversified enough that there are plenty of tests to go around.