The Year That Measles Returned 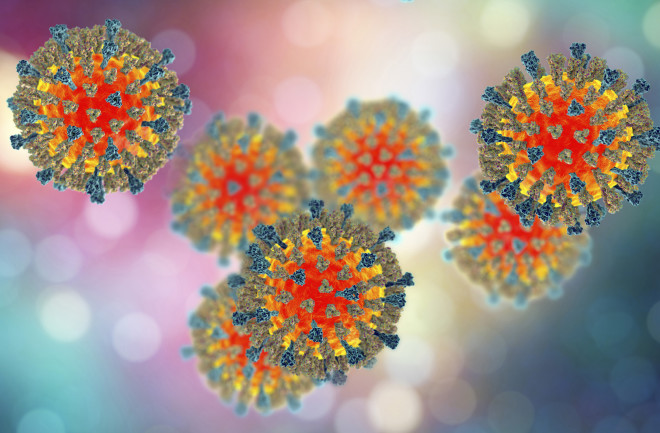 An illustration of the measles virus. (Credit: Kateryna Kon/Shutterstock)

In February, an international traveler carrying the measles virus passed through Boston’s busy South Station bus terminal. Once discovered, the Boston Public Health Commission urged anyone in the person’s path who was unvaccinated — other travelers, local residents, bus drivers, station employees — to see their doctors.

“Measles is the most contagious virus we know about,” says H. Cody Meissner, chief of pediatric infectious diseases at Floating Hospital for Children at Tufts Medical Center in Boston. “Hundreds of people could have been exposed.”

A cough or sneeze from an infected individual can spray virus-laden droplets — each one only about 5 micrometers, barely smaller than a human red blood cell — that can remain infectious and airborne for up to two hours. Measles easily infects around 9 in 10 unvaccinated people who breathe contaminated air or touch an infected surface. “The germs that cause these diseases … are plentiful — they’re just waiting until they find someone who is not immune,” says Meissner.

The Boston incident happened in the midst of the largest measles outbreak in the U.S. since 1992. Successful vaccination campaigns had led to the domestic elimination of the disease by 2000.

But in 2019, 1,250 cases had been confirmed in 31 states by October — over three times the number of cases reported in 2018 (372). The outbreaks have been mostly concentrated in New York, New Jersey, Washington state and California, with the majority of cases, more than 700, occurring in New York City. Over 400 more occurred elsewhere in the state, primarily in cloistered Orthodox Jewish communities.

“It’s really a bunch of small outbreaks,” says Tom Clark, deputy director for the Centers for Disease Control and Prevention’s Division of Viral Diseases. “Most of them are under control after a handful of cases.” That’s because most people are vaccinated, says Clark.

“[But] sometimes, close-knit communities are under-vaccinated by choice, often because of parents’ concerns about the safety of vaccines or a lack of concern about the seriousness of the diseases vaccines protect against,” says Clark.

While most people fully recover, roughly 1 in 5 cases leads to serious complications that can include miscarriages, severe diarrhea, ear infections, pneumonia and encephalitis, an infection triggering brain swelling that can result in a vegetative state or even death. A small but growing number of people who seem to recover may have the virus silently lurking in their brain, and up to a decade later can develop SSPE (subacute sclerosing panencephalitis), a very rare but fatal disease of the central nervous system.

Doctors say that roughly 95 percent of people need to be vaccinated to prevent measles outbreaks in a given community. This provides what’s called herd immunity, meaning enough people are vaccinated to prevent the spread of the disease. Although the MMR (measles, mumps and rubella) vaccination rate is about 94 percent nationwide, there are large pockets with low immunization rates across the country — due mainly to poverty, lack of access to insurance and doctors, and an increasing number of parents who willingly opt out of vaccinating their kids.

While various factors contributed to this rise, including civil unrest, low awareness of the need to vaccinate, skepticism about vaccines and lack of availability, the common denominator is a lowered rate of vaccine coverage. “There were over 83,000 cases of measles in just Europe alone, in a region with access and education,” says Heidi Larson, a former UNICEF official and director of the Vaccine Confidence Project at the London School of Hygiene & Tropical Medicine. “It is shocking.”

But there are global and domestic campaigns to strengthen confidence in vaccines, tighten up religious exemptions and focus on getting kids vaccinated. In July, an international group of public health leaders, including members of World Health Organization, released the Salzburg Statement on Vaccination Acceptance. The statement called for search engines and social media organizations to prevent the spread of inaccurate information on childhood vaccinations, and urged governments to do more to support mandatory immunization programs.

“Our institutions are not prepared or organized in a way to counter the new networks of disinformation on health,” says Scott Ratzan, a statement coauthor and a founder of the International Working Group on Vaccination and Public Health Solutions. “How do we get health professionals and other policy[makers] to understand the fundamental nature of vaccines so we don’t go backwards, rather than forward, in health progress?”

Timeline of the 2019 Outbreak:

- September 2018 An international traveler arrives in Rockland County, a suburban county north of New York City, with a suspected case of measles.

- October 2018 Measles cases are reported in Brooklyn and Queens, two boroughs of New York City, an outbreak suspected to have started when an unvaccinated child became infected while visiting Israel.

- January 2019 The World Health Organization lists vaccine hesitancy as one of the top 10 threats to public health in 2019. On the 28th, Washington state officials declare a state of emergency after measles cases are reported in Clark County.

- April 2019 New York City Mayor Bill de Blasio declares a public health emergency, and the city’s health commissioner orders every adult and child who lives or works in affected areas to be vaccinated. On the other side of the country, nearly 700 students and staff at UCLA and California State University, Los Angeles, are quarantined after exposure to measles.

- May 2019 A subsequent outbreak occurs in three counties surrounding Puget Sound, believed to have been triggered by a traveler at the Seattle-Tacoma Airport in April. That same month, Maine eliminates religious exemptions for vaccine requirements for schoolchildren.

Editor's note: In an earlier version of the story, it was unclear whether it was the measles virions, or sneeze particles, that are 5 micrometers in size. We've also updated the unit "microns" to the more up-to-date, "micrometers."