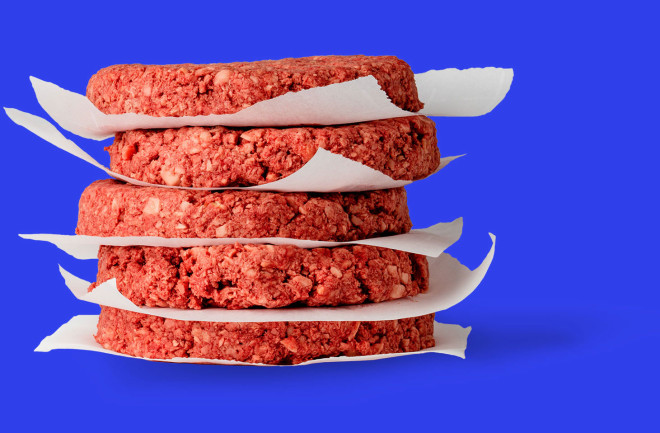 Meatless burger patty. Photo Credit: Impossible Foods If you’re living in Los Angeles, there is no doubt that you've noticed the surging popularity of plant-based foods in the dining landscape. Not only are restaurants blooming with new vegan menu options, but plant-based food products are increasingly emerging in the food industry. Notable newcomers include veggie burgers and dairy-free products including milk, yogurt, and even cheese! We are now welcoming the age of the plant butchers: a group of creative and enterprising culinary geniuses and food scientists who are passionate about developing healthier and more sustainable forms of meat by exploring the world of plant proteins. A new generation of cheesemakers is also on the rise, experimenting with bacteria to develop plant-based ‘dairy’ products. Let's explore how these passionate individuals come up with such creative food innovations. A Plant-Based Burger that Bleeds Patrick Brown, a biochemistry professor from Stanford University, has spent the the last five years trying to investigate at a molecular level why beef tastes, smells, and cooks the way it does. He's the CEO of Impossible Foods, a California-based company, that has successfully innovated new methods and ingredients to naturally recreate the sights, sounds, aromas, textures and flavors of a meat burger — their creation is called the “Impossible Burger” — which uses 95% less land, 74% less water, and creates 87% less greenhouse gas emissions (Elliott). A key feature of the Impossible Burger is heme, a molecule that is found in high concentrations in beef. Heme is an iron-containing molecule in blood that carries oxygen. It’s heme that makes our blood red and makes meat look pink and taste slightly metallic (Hoshaw). However, harvesting sufficient amounts of heme for a commercially available burger was challenging and required innovative scientific techniques. Luckily, there is a plant-based version of heme called leghemoglobin, which is a nitrogen/oxygen carrier hemoprotein found in the nitrogen-fixing root nodules of leguminous plants such as soybeans. When nitrogen-fixing bacteria called rhizobia colonize the roots of legumes as part of a symbiotic interaction between plant and bacterium, the legumes will begin synthesizing leghemoglobin. Leghemoglobin, which has a high affinity for oxygen, is able to buffer the concentration of free oxygen in the cytoplasm of the infected plant cells to ensure proper function of the oxygen-sensitive nitrogenase, the enzyme responsible for fixing atmospheric nitrogen. However, extracting leghemoglobin from mass production of soybeans would be expensive, time consuming, and would release large amounts of carbon into the atmosphere from unearthing the plants. A more efficient strategy is to use yeast! Genetic modification of the common yeast, S. cerevisiae, is a powerful way to produce desired molecules such as leghemoglobin. Using genetic engineering and molecular biology techniques, the Impossible team took the gene in soybean which encodes for the heme protein and transferred it into yeast, which enabled the production of vast quantities of the blood-like compound. To replicate how beef feels in the mouth, the Impossible Burger contains a combination of protein from wheat and potatoes, and coconut oil. The wheat and potato proteins result in a firm exterior when the meat is seared, while coconut oil is essential for the juiciness. Among all plant oils, coconut oil has a higher melting point, meaning that it melts above temperatures of 37 degrees Celsius; so the burger becomes juicy when the patty hits the frying pan and has a good mouthfeel, similar to lard when you eat it. While Impossible Burger is headquartered in Redwood City, California, it has recently partnered with fast food chain Umami Burger to offer the meat-free option at 14 locations in California. Impossible burgers are also found locally at the Crossroads restaurant! Listen to our recent tasting of the impossible burger with UCLA Science & Food’s Amy Rowat and Evan Kleiman of KCRW’s Good Food found at this link: https://soundcloud.com/kcrws-good-food/01-gf-071517-impossible-burger

Cheese Without The Milk Cheese is another animal-based product that is now available in a plant-based version. They call it “vegan cheese”, and it gives a surprisingly rich and creamy mouthfeel with a tangy flavor as the normal dairy version. Keeping the essence of what makes cheese cheese, the new generation of vegan cheeses are also made through fermentation and aging. The base ingredient used to make vegan cheese is typically tree nuts such as cashews, Brazil nuts, macadamia nuts, hazelnuts, or almonds. The approach is to first soak the raw nuts, blending them with a little water to make a slurry texture. This slurry mixture will be the media used to inoculate the bacterial cultures, which will ferment the sugars from the nuts into acids, which is what creates the cheese’s tangy flavor. Similar to the art of cheesemaking, vegan cheese makers can create different tasting vegan cheeses using various bacterial blends to acidify the cheese to different extents and produce different flavor compounds. The inoculated slurry is then left to ferment for approximately 36 hours. To solidify milk into cheese, rennet is commonly added to curdle the protein in milk: this complex of enzymes is produced in the stomachs of ruminant mammals. The key component of rennet is a protease enzyme called chymosin . To make a vegan-version of chymosin that does not require emptying animal stomachs, cheesemakers rely on the development of genetic engineering: the gene encoding chymosin is transformed into bacteria, fungi or yeast so they can produce chymosin during their natural fermentation (Harris TJ). The resulting chymosin is called FPC, which stands for “fermentation-produced chymosin.” To ensure that the vegan cheese does not contain any GM (genetically modified) ingredients, the chymosin produced by the genetically modified organisms is isolated from the fermentation broth and the organisms are killed. In addition to rennet, oil, emulsifiers and thickeners are often also added to produce firmer types of vegan cheeses. Aging, also called ripening, is the last and most crucial stage in cheese making. During the process of aging, microbes and enzymes transform the texture and the flavor intensity of the cheese, which contribute to the distinct flavor of cheeses. The three primary reactions that define cheese ripening are glycolysis, proteolysis, and lipolysis. The role of glycolysis is to acidify the curd or cheese, which produces many downstream effects including the regulation of flavor, texture, and melting point of the cheese. The role of proteolysis and amino acid catabolism is to: (1) develop the cheese texture by increasing the water binding capacity of the curd, and indirectly through an increase in pH due to the release of ammonia during breakdown of amino acids; and (2) develop the flavor of cheese through the production of short-medium peptides and free amino acids, which when broken down into simpler compounds, generate many important volatile flavor compounds, and also the release of strong, flavorful compounds from the cheese matrix during chewing (Eskin, p342). Low levels of lipid degradation contribute to the ripening of cheeses such as Cheddar, Gouda, and Swiss Cheese by breaking down fat into short fatty acids (which are 4 to 10 carbons long) and are highly flavored. However, excessive levels of lipolysis could lead to a rancid taste (McSweeney and Sousa 2000; Collins et al. 2003b). Although vegan foods may invoke the image of a healthier diet, it is important to note that some varieties of vegan alternatives can also be highly processed to get the flavors and texture just right. Trying to make your own vegan meat in your kitchen may be a challenge, but making your own vegan cheese is definitely worth to try! Here is a delicious recipe to make vegan cheese using cashew nuts: http://www.thebuddhistchef.com/recipe/vegan-cheese/