The shadow of the Emishi 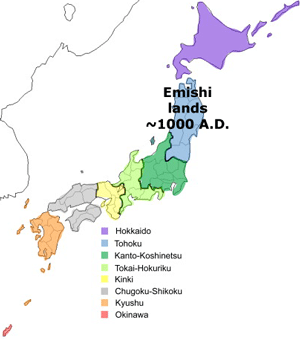 Randy McDonald just pointed me to a 2008 paper in AJHG, Japanese Population Structure, Based on SNP Genotypes from 7003 Individuals Compared to Other Ethnic Groups: Effects on Population-Based Association Studies. It speaks to an issue I brought up earlier in my post, Sons of the farmers, the story of Japan, which describes the ethnogenesis of the Japanese modern people from the Yayoi culture. The Yayoi presumably brought rice from the Asian mainland, probably from what is today southern Korea. But the Japanese islands were not uninhabited before this period. Japan was home to the Jomon culture, which has a rather storied history in the annals of archaeology. The Jomon seem to have been a predominantly hunter-gatherer population which was also sedentary, and engaged in the production of objects such as pottery which are normally associated with more advanced farming societies. I have a difficult time crediting the ~13,000 year period of continuous development which is attributed to the Jomon, but, it does seem likely that the period between 2,000 and 2,500 years before the present did mark a sharp cultural discontinuity in the Japanese islands, as Jomon gave way to Yayoi. A related issue to this indisputable cultural shift is the question of whether it was accompanied by a demographic transition. This particular debate is fraught with politics, but we have enough genetic information that we can hazard a tentative guess. It does look like the Jomon-Yayoi cultural shift was accompanied by a significant demographic transition. In particular, the Ainu of the north and the inhabitants of the Ryukyu islands in the south seem distinctive from the majority of Japanese who inhabit the core islands. The hypothesis that these peoples are more related to the Jomon, or directly descended from them. One must distinguish these two groups though; the Ainu remained culturally distinctive from the Japanese, in lifestyle and language before their de facto absorption into the Japanese of late. In contrast, the people of the Ryukyus today seem to be clearly related to the southern Japanese in both language and lifestyle. If the Ryukyu islanders preserve more of the Jomon ancestral heritage, it may simply be due to the dilution of the signal of the original Yayoi pioneers as they moved south. But there is another piece of the puzzle which has always been a point of curiosity for me: what happened to the non-Japanese populations of northern Honshu? Termed Emishi, these people retained a distinctive identity in northern Honshu until ~1,000 years ago. Fragmentary references in the historical texts make it clear that these people did not speak Japanese natively, and were physically different in appearance, being a "hairy" and "bearded" people. This is how the Ainu were also described, and because of the Emishi's geographical proximity to Hokkaido it is presumed there may have been a cultural continuity. It turns out that the 2008 paper hints at the genetic imprint of the Emishi. First, some preliminaries. The authors drilled down to between 100 and 150 thousand SNPs. While 10,000 random markers is sufficient for inter-continental distinctions, a floor of 100,000 is probably optimal for more fine-grained examinations. They had the HapMap populations, which included Africans, Europeans, Chinese, and, some Japanese. But their big data set were nearly 7,000 Japanese from all over the islands. I assume this is large enough that one can down-weight the probability of problems with representativeness due to small sample sizes. Below is a table of Fst values. This basically measures between population genetic distance. There are two things to focus on. First, the Okinawan sample, from the Ryukyu islands, is clearly more distant from all the main island samples. This is what we'd expect. But second, notice that the highest value of genetic distance is between Tokai-Hokuriku and Tohoku.

Tokai-Hokuriku and Tohoku are both on Honshu, the former in the center of the island, between Tokyo and Osaka, and the latter to the far north. Tohoku then is coterminous with the former Emishi region. Some of the patterns here are made clear by the recent history of migration within the Japanese islands. Tokyo is in Kanto-Koshinstsu, and is naturally a magnet for individuals from all over the country. Hokkaido was settled by Japanese only within the last 200 years, and not through gradual expansion from Tohoku to the south. 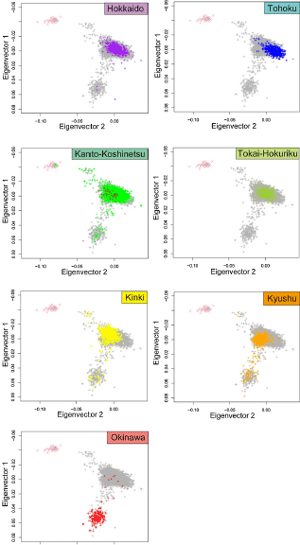 Another way to look at the genetic variation is a PCA plot. The y axis represents eigenvector 1, the largest dimensions of variation in the data set, and the x axis eigenvector 2, the second largest dimension. On all the plots you see the HapMap Chinese from Beijing on the top left of the plots. You can see here the difference in sample sizes. The cluster to the bottom and center represents Okinawans. The primary central cluster represents individuals from the main islands of Japan. Each panel highlights a different geographical region. So you see, for example, that individuals from Kanto-Koshinetsu are relatively well distributed across the whole "Japanese" area of the plot. Okinawans are primarily in their own cluster, as expected. The regions closer to mainland Asia are shifted in that direction on eigenvector 2. Finally, notice that the Tohoku population represents a vertex of a triangle where the two other positions are held by the Okinawans and Chinese. The authors here argue that skewed distribution of the Tohoku sample is evidence of disproportionate assimilation of a native pre-Yayoi element. Of course it could just be isolation by distance, as Tohoku is furthest from the Asian mainland aside from Hokkaido. I don't think we have much more to go on right now. But as we proceed into the future and data sets become more widely available, and analytic techniques more powerful, I wonder if we can reconstruct the Emishi from the chromosomal segments of the people of Tohoku which seem to "jump out" of the Japanese genetic background. And we can always hold out hope for DNA extraction from Jomon burials!