The Secret Ingredient in Your Microwave Popcorn: PFAS Chemicals 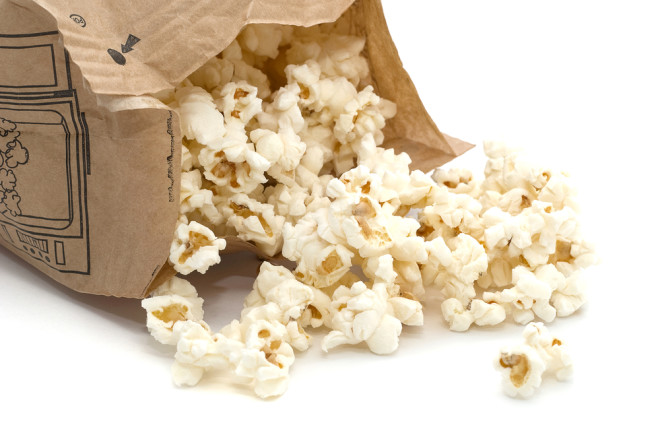 Tasty and toxic? A new study finds elevated levels of PFAS chemicals in the bloodstreams of people who eat a lot of microwave popcorn and fast food. (Credit: Maxim Larin/Shutterstock)

BPA isn’t the only chemical in our food supply that you should be aware of.

A group of human-made chemicals called PFAS have been in use since the mid-20th century and they’re in our water, our air, our soil — and, potentially, your afternoon snack. A new study finds these chemicals may pose much greater health risks than previously thought.

PFAS exposure has been linked to a broad range of health problems, including cancer, hormone disruption, weight gain and childhood development issues.

According to a paper published in Environmental Health Perspectives by researchers at the Silent Spring Institute, people who frequently eat microwave popcorn, fast food and takeout meals have higher levels of PFAS in their bloodstream than people who mostly eat meals cooked at home.

In some cases, PFAS might make their way into foods by way of the environments in which they were grown or raised. But in other cases, like microwave popcorn, the researchers think the PFAS are leaching in from food packaging. It’s also possible that PFAS compounds, when heated, are being released into the air and inhaled.

PFAS, an acronym for per- and polyfluoroalkyl substances, are a class of nearly 5,000 chemicals used in common consumer and industrial products — from food packaging and cookware to stain-resistant carpeting and upholstery to cosmetics and firefighting foams.

PFAS are sometimes called “forever chemicals” because they don’t easily break down and they accumulate in the environment.

“They’re toxic, extremely persistent, and they move around in the environment,” said Laurel Schaider, a research scientist at Silent Spring Institute, a nonprofit that studies environmental causes of women’s health issues. “Some chemicals, like bisphenol A, or pharmaceutical chemicals, are cleared from our body really quickly, but PFAS chemicals stick around for years.”

The study comes at a time when mounting health concerns have led many states, including Massachusetts and Maine, to consider measures to limit the use of PFAS in food packaging.

Scientists know that food is a primary source of PFAS exposure, but the specifics around diet and exposure have been unclear. Here, the researchers based their analysis on survey data collected by the Centers for Disease Control and Prevention between 2003 and 2014, which asked more than 10,000 people to recall what they’d eaten over the course of four different time frames — the previous 24 hours, 7 days, 30 days and 12 months. The participants also gave blood samples that were analyzed for PFAS chemicals.

The researchers found that one of the biggest PFAS offenders was microwave popcorn; people who reported eating the snack on a daily basis over the course of a year had PFAS levels that were up to 63 percent higher than average.

Similarly, people who consumed a lot of fast food and takeout meals, including pizza, also tended to have higher levels of PFAS in their bodies, Schaider said.

In a previous study, Schaider and her team found that nearly half of all paper wrappers used by fast food establishments contain PFAS — particularly burger wrappers and cookie pouches. And 20 percent of paperboard packaging, like boxes for fries and pizzas, contained PFAS. Most microwave popcorn bags on store shelves are probably made with PFAS chemicals, she said.

No one can completely avoid exposure to PFAS since the chemicals are literally everywhere. But cooking meals at home is one way to reduce exposure to PFAS. People who commonly ate home-cooked meals using ingredients purchased at a grocery store had much lower levels of PFAS in their bodies, Schaider said.

Interestingly, women in particular seemed to benefit the most from eating home-cooked meals. Women had anywhere from 12 to 40 percent lower PFAS levels in their blood than men, Schaider said. One explanation is that women and men tend to eat different foods when they’re at home.

“And, [grocery store food] encompasses many different types of food. Some of that might be already prepared but brought home and eaten, versus a meal that’s cooked at home prepared from fresh ingredients,” Schaider said.

In upcoming studies, Schaider and her colleagues will aim to uncover how PFAS exposure might be harmful to our health. One planned study includes studying young children growing up in communities with PFAS contaminated drinking water, and learning about how exposure affects their immune systems.

“Previous work shows that children with higher PFAS levels have lower levels of antibodies circulating in their bodies, which means vaccines might be less effective in kids with the highest PFAS,” she said.

In the meantime, should you worry about your microwave popcorn habit? Schaider offered some perspective on the different ways we encounter PFAS in our lives.

“It makes sense to limit their use to only the most essential uses, like a medical device,” she said. “But dental floss, fast food wrappers, or microwave popcorn bags are not essential uses. There are alternatives that we already have available.”