The Rare Humans Who See Time & Have Amazing Memories

It's called time-space synesthesia, and it's caused by extra neural connections. 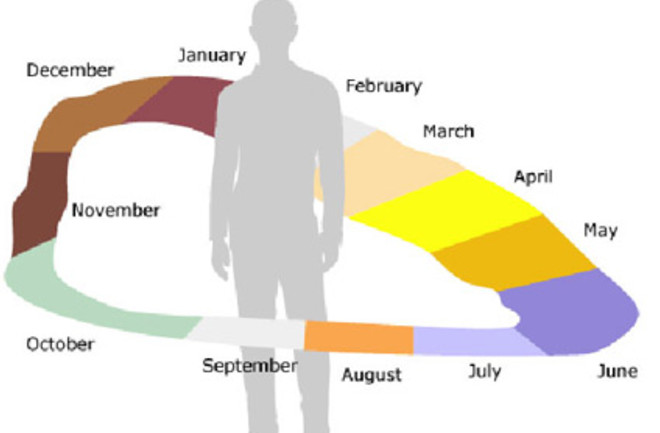 The “normal” form of the condition called synesthesia is weird enough: For people with this condition, sensory information gets mixed in the brain causing them to see sounds, taste colors, or perceive numbers as having particular hues.

But psychologist David Brang is studying a bunch of people with an even odder form of synesthesia: These people can literally “see time.”

Brang’s subjects have time-space synesthesia; because they have extra neural connections between certain regions of the brain, the patients experience time as a spatial construct.

In his research, Brang describes one patient who was able to see the year as a circular ring surrounding her body that rotated clockwise throughout the year. The current month was reportedly inside her chest with the previous month in front of her chest, reports New Scientist.

“In general, these individuals perceive months of the year in circular shapes, usually just as an image inside their mind’s eye.”

So, while boring, normal folks whip out their physical or online calendars to jot down plans for the future, time-space synesthetes just look straight ahead and can tell you precisely what days work for them. It’s almost like their personal version of augmented reality.

Brang found these uncommon individuals by recruiting 183 students for a trial, in which he asked them to visualize the months of the year and reconstruct that representation on a computer screen.

Four months later the students were shown a blank screen and asked to select a position for each of the months. They were prompted with a cue month — a randomly selected month placed as a dot in the location where the student had originally placed it. Uncannily, four of the 183 students were found to be time-space synesthetes when they placed their months in a distinct spatial array — such as a circle — that was consistent over the trials.

Earlier research has shown that people with synesthesia, on an average, remember about 123 different facts related to a certain period in their life, while a regular person could recall just 39 facts.