The Race to Reverse Antibiotic Resistance 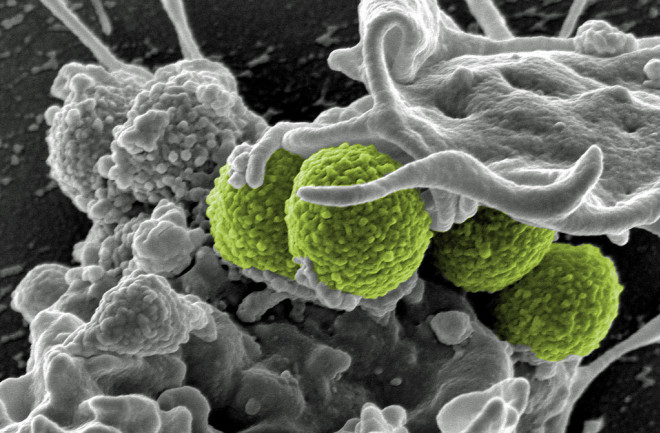 Interaction of MRSA (green bacteria) with a human white cell. MRSA252 is a leading cause of infections associated with visits to the hospital in the United States. (Credit: NIAID) Alternating between different antibiotics could help steer bacterial evolution away from antibiotic resistance. Humans have shaped the evolution of the organisms around us – animals, plants, and even yeast – for thousands of years. Since the early 20^th century, we’ve been unwittingly doing the same thing with the bacteria that make us sick, mostly by ensuring that only the strongest bacteria survive. Now medical researchers are investigating ways to reverse that process by rotating different drugs.

When a patient with a bacterial infection takes an antibiotic, the drug kills most of the bacteria. Some bacteria, however, may have genetic mutations that make them resistant to the drug’s effects. After all, bacteria reproduce quickly, which gives them plenty of chances to pick up a random mutation that turns out to be useful. Bacteria with the resistant mutation won’t die; instead, they’ll survive and produce more resistant bacteria. Soon, the antibiotic won’t be able to treat the patient’s infection. That process has been going on since the early 20^th century, when the first commercial antibiotics hit the shelves. Doctors strike at bacteria with a drug, and bacteria evolve ways to resist. It’s like an arms race, and traditionally, humanity’s answer has been to just keep making new antibiotics. The problem is that bacteria evolve faster than medical researchers can develop new drugs, so at the moment, we’re losing.

A human neutrophil, the most abundant type of white blood cell, consumes MRSA. (Credit: NIAID) We need a new strategy, and some researchers say that means fighting evolution with evolution. By applying selective pressure that wipes out resistant strains instead of non-resistant ones, they say it may be possible to reverse the course of bacterial evolution by, in effect, selectively breeding bacteria into slightly more compliant enemies. “These approaches can also be used in a ‘one-two punch’ treatment strategy,” wrote Harvard systems biologist Michael Baym and his colleagues, Laura K. Stone of Harvard and Roy Kishony of the Israel Institute of Technology, in a recent paper in the journal Science: “First select against resistance to eliminate single-drug resistant mutants from a population, and then follow up with the now-effective classical antibiotic.”

Not Going Away on Its Own

For a while, some researchers thought that simply removing the selective pressure that produced resistant strains would be enough to reverse the trend. The idea is appealingly simple: The mechanisms that allow bacteria to resist antibiotics also cost the bacteria a lot of energy. Without the selective pressure that helped resistance evolve in the first place, bacteria that don’t put energy into unnecessary resistance mechanisms will grow and reproduce more quickly than those that do.

By applying selective pressure that wipes out resistant strains instead of non-resistant ones, researchers say could turn bacteria into slightly more compliant enemies. (Credit: Science) However, it turns out that resistance isn’t as physiologically costly to maintain as some researchers once thought, so removing the pressure isn’t enough to cause drug-resistant bacteria to simply lay down their weapons. “People have tried,” says University of California Merced biologist Miriam Barlow. “It never works in any kind of reliable way.” Instead, doctors are looking for a way to apply pressure that will actively select against resistant strains and in favor of non-resistant ones.

A genetic mutation that helps bacteria resist one antibiotic might also change something that leaves the bacteria vulnerable to another antibiotic. “By adapting to the presence of one antibiotic, bacteria effectively specialize and can become less resilient to other antibiotics,” explained Baym and his colleagues in their paper. If a pathogen is resistant to one drug, doctors can switch to another drug – one to which the pathogen is more vulnerable. When the new drug kills off the resistant bacteria, nonresistant versions will have a better chance of surviving. Alternating between antibiotics could lead to the evolution of strains that have lost their resistance to both drugs. That’s a simplified explanation, of course. In practice, drug cycling may involve several drugs, rather than just two. And that strategy depends on which mutations show up in the bacteria, and how effective they are at creating resistance. However, drug cycling can help steer bacterial evolution away from some types of resistance, if doctors choose the right drugs.

The Probability of the Right Mutations

In a study published in 2015, Barlow, along with a team of mathematicians, tested 15 beta-lactam antibiotics against bacteria with different genotypes of an enzyme called beta-lactamase, which helps some bacteria resist beta-lactam antibiotics like penicillin. Based on the bacteria’s growth rates, the researchers measured how resistant each strain was to each antibiotic. Then, they predicted the probability of each antibiotic selecting for mutations that would decrease resistance. Based on that, they developed an algorithm to predict which sequence of five antibiotics would most likely reverse the bacteria’s evolution of resistance. One sequence of drugs had a 38 percent to 100 percent probability of coaxing the bacteria to evolve back to a non-resistant wild type, while another had a probability between 60 percent and 100 percent. Now, Barlow and her colleagues are studying how different concentrations of the drugs might affect those probabilities. They’re using miniature, synthetic organs and circulatory systems called “bodies-on-chips” to simulate how drugs would circulate in a person. According to Barlow, the simulations are a necessary step on the way to animal trials and, eventually, human clinical trials of the drug sequences recommended by her team’s algorithms. “It’s going to be important for patients in maybe five years,” she said.

Baym and his colleagues envision a scenario in which hospitals can rapidly sequence the genome of a patient’s infection and use that information to identify which drugs a bacteria is resistant to and how that resistance works. Such detailed information would allow doctors to choose the most effective drug combination and even reconstruct a pathogen’s evolutionary history. That scenario may not be too distant. An Oxford University-based project called Mykrobe is planning a trial of a program called Predictor, which will analyze bacterial genomes for genes related to resistance and then tell doctors which drugs the pathogen is resistant to. So far, the Mykrobe team has designed a version for MRSA and one for tuberculosis. Of course, tools like Predictor still need genome data to work with, which means the bacteria’s DNA has to be sequenced quickly enough to be useful for treatment. Making it practical for the average hospital to sequence bacterial genes in real time is a significant challenge. The technology exists, but it’s not fast enough or affordable enough for most hospitals to use as a clinical tool.

MRSA being ingested by a white blood cell. (Credit: NIAID) Meanwhile, Baym and his colleagues have even more ambitious ideas about the future of the arms race against resistant bacteria. They expect doctors to someday be able to get ahead of bacteria by predicting how a strain might evolve and then moving preemptively to counter it. “For example, if a pathogen’s genome is a few mutations away from resistance, we might predict that, while it is not resistant, it could become resistant if certain drugs are used,” they wrote. For a given drug, there are only a limited number of ways that bacteria can resist. That means it could be possible to at least predict the probability of mutations that lead to each one; it’s easy to imagine mathematical approaches like Barlow’s laying the groundwork for such techniques. However, any kind of prediction would require more detailed knowledge about the genetics behind antibiotic resistance. That’s something that scientists around the world are still working on.

Ultimately, just as bacteria can evolve several different ways to resist antibiotics, doctors will need multiple strategies to thwart resistance. There is, as Baym and his colleagues wrote, no single “magic bullet.” Some of those strategies will be the same ones we’ve used for years: discovery and development of new drugs, careful monitoring for new resistant strains. Others, however, are new approaches, such as using drug cycling to guide bacterial evolution in the direction doctors want it to go.