The Psychic Energizer!: The Serendipitous Discovery of the First Antidepressant

The early twentieth century was a period of frenetic drug development, a seemingly endless series of pharmaceutical and medical discoveries: antibiotics to treat bacterial infections, chemotherapeutics to battle cancers, and barbiturates to tranquilize anxieties, among many others. A huge number of these revolutionary medical treatments were discovered in the first half of the 1950s, an unprecedented era of advances in chemistry yielding a pharmacopoeia that would transform disease and the practice of medicine.One of the drugs developed during these years altered medicine’s approach to not just one debilitating disease, but two. A drug designed to kill the bacteria that causes tuberculosis was serendipitously found to improve mood and invoke joy, a discovery that would profoundly impact psychiatry’s approach to the treatment of depression. This drug, iproniazid, would become the world's first antidepressant, launching an era of rapid development of psychoactive drugs while simultaneously moving the field of psychiatry away from the treatment du jour: electroconvulsive therapy.Iproniazid is a derivative - a great-grandson if you will - of the hydrazine compounds that were discovered in the late 1800s. Hydrazine is most notable for fueling Nazi V2 rockets during WWII, but following the end of the war, the enormous remaining stockpiles of the stuff were cheaply sold to the chemical and pharmaceutical industries for research (1). 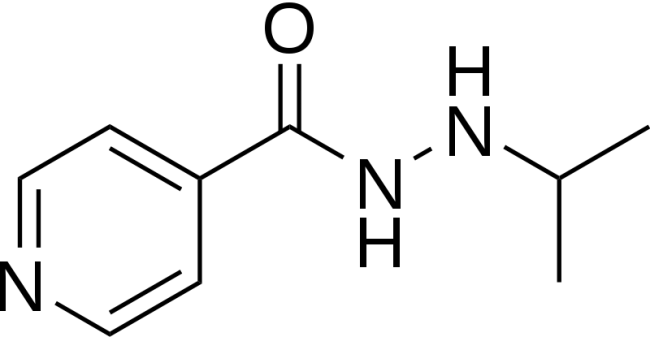 The chemical structure of iproniazid. Image: Harbin. Click for source. Within a few years, in 1951, biochemists working at the Hoffman-La Roche laboratories in New Jersey were synthesizing hundreds of compounds to identify novel anti-microbial agents. In this fashion, certain derivatives of hydrazine were discovered to be effective against Mycobacterium tuberculosis infection in mice, including the famous drug isoniazid, which is still used to this day as part of the standard treatment regimen for the lung infection.A year later, another derivative of hydrazine, iproniazid, was discovered that was equally successful at treating TB infection in mice but even more so in humans. Patients treated with this new experimental drug also reported some unusual side effects: sunnier moods and increased interest in pleasurable activities. It increased appetites encouraging weight gain while also improving sleep and enhancing mood (2). In short, it targeted many of the debilitating effects of depression, including loss of appetite, reduced sleep, feelings of lethargy, loss of interest, and ability to concentrate.

The remarkable effects of iproniazid were even documented in the news. In 1952, clinical trials to assess the efficacy of iproniazid were performed on tubercular patients that were voluntarily hospitalized at Staten Island’s Sea View Hospital

. In the 1950s, this bustling sanitarium was one of the largest in the United States.A photograph of the hospital and its patients by the Associated Press capture an illuminating scene: patients in a celebratory mood, dancing. Other articles relays reports of the patients “dancing in the halls tho’ there were holes in their lungs" (3). One physician, a Nathan S. Kline, an assistant professor of psychiatry at the University of Columbia would describe the drug as a “psychic energizer” in his patients, one that instilled a “sense of joyousness and optimism"(4). For men and women racked with a disabling lung infection, vigor and improved vitality were momentous improvements to a life bound by fatigue and illness.Iproniazid’s remarkable side-effect as a "pep pill" would be exploited and used in patients that didn’t even harbor the tuberculosis bug, but suffered from chronic diseases such as rheumatoid arthritis and cancer. In 1957, after a series of papers chronicling iproniazid’s mood-stimulating effects on depressed patients were presented at a Swiss psychiatry conference, 400,000 depressed patients were be treated with the novel “TB drug,” and the world’s first specifically antidepressant medication came into being (5). Today we know that iproniazid works by inhibiting the monoamine oxidase (MAO) enzyme, which breaks down serotonin and dopamine, important neurotransmitters involved in pleasurable emotions. Inhibition of the MAO enzyme that destroys these neurotransmitters subsequently results in their increased levels within the brain and therefore an elevated mood.Iproniazid had another, less savory, side-effect which quickly curtailed its use as an antidepressant. As a result of its inhibition of the monoamine oxidase enzyme, it also prevents the breakdown of a type of adrenaline known as norepinephrine. Certain foods rich in a chemical compound known as tyramine can stimulate the release of norepinephrine and constrict blood vessels, resulting in increased blood pressure. Patients on iproniazid, or any other antidepressants within the class of monoamine oxidase inhibitors (MAOI), who consume tyramine-rich foods such as cheese, chocolate, and alcohol can experience deadly, sky-rocketing blood pressure in what is known as "the cheese reaction."As quickly as iproniazid entered the field of psychiatry, it left. Today, MAOI are used as a last resort in patients refractory to other more commonly used antidepressants. Though iproniazid’s starring role in the emerging field of psychotropics was short-lived, its discovery had deep and lasting effects on psychiatry as a whole, ushering in new theories regarding mental illness as well as research into therapeutic drugs. As noted by Francisco López-Muñoz and Cecilio Alamo, two Spanish professors writing on the history of antidepressants,

Iproniazid made two fundamental contributions to the development of psychiatry: one of a social-health nature, consisting in an authentic change in the psychiatric care of depressive patients; and the other of a purely pharmacological nature, since these agents have constituted an indispensable research tool for neurobiology and psychopharmacology, permitting, among other things, the postulation of the first aetiopathogenic hypotheses of depressive disorders (1).

As a result of the serendipitous discovery of iproniazid as an antidepressant and the ensuing advances in psychiatric drugs, the 1950s are considered the golden decade of psychopharmacology. Iproniazid’s invigorating effects on mood and spirit would introduce a new medical perspective on the treatment of a neglected disease while forever changing the field of psychiatry and millions of lives. Resources "Shock therapy, trepanation, and trans-orbital lobotomies do not command the same kind of grudging respect we can now muster for the similarly slow and painful advance of other healing disciplines." From the Body Horrors archives, looking at an unusual treatment in psychiatry's history: Pyromania! On Neurosyphilis and Fighting Fire with Fire Staten Island's Sea View sanitorium was abandoned in the 1970s and has laid in ruins, devoured by the surrounding vegetation for many decades. Many of the MAOIs, even in spite of their risks, are still used to this day for depression as well as the management of neurodegenerative disorders like Parkinson’s and Alzheimer’s disease. References 1) F López-Muñoz and C Alamo. (2009) Monoaminergic neurotransmission: the history of the discovery of antidepressants from 1950s until today. Curr Pharm Des. 15(14): 1563-86 2) C Castilla del Pino (1955) Síndrome hiperesténico. Alteraciones de la personalidad consecutivas a la terapéutica hidrazídica. Actas Luso- Esp Neurol Psiquiat.14: 210-9 3) M Sandler (1990) Monoamine oxidase inhibitors in depression: history and mythology. J Psychopharmacol. 4: 136-9 4) HP Loomer et al. (1957) Iproniazid, an amine oxidase inhibitor, as an example of a psychic energizer. Congress Rec.5: 1382-90 5) S Wrobel (2007) Science, serotonin, and sadness: the biology of antidepressants: a series for the public. FASEB J. 21(13): 3404-17