The Prozac Yogurt Effect: How Hype Can Affect the Future of Science 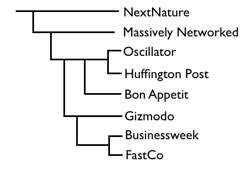 The phylogeny of Prozac yogurt.

Christina Agapakisis a synthetic biologist and

A few weeks ago, I saw a retweet that claimed “biohacking is easier than you think” with a link to a post on a blog

for a couple years now, and his most recent project imagines how synthetic biology might produce and deliver medicines in the future. He demonstrates---using homemade tools, equipment purchased on eBay, and online resources for finding

DNA sequences---how someone could engineer a strain of bacteria to produce Prozac-laced yogurt. While he’s not actually making Prozac, his demonstration does show pretty accurately how someone could get DNA into a bacterium (without, of course, the frustrating months of troubleshooting that almost any experiment inevitably requires). I posted my own version

of the story, writing that art projects like this can ask important questions about biological design. The next day, my post was syndicated on the Huffington Post

with a modified title that emphasized Prozac. Then a version appeared on Gizmodo

, and it went on from there, spreading across the Internet. By the time its spread was complete, Van Balen, an artist interested in the implications of emerging biotechnologies, had mutated into a bioengineer

at the forefront of synthetic biology research, creating Prozac yogurt in five days with just 860 base pairs of DNA

. (If you were to actually make Prozac biologically, it would certainly take the action of many enzymes, each encoded by their own sequence of hundreds or thousands of base pairs). How did an art piece, a design fiction that asks us to think critically about the possibilities opened up by synthetic biology, provoke an unskeptical acceptance of what bioengineering has made possible? Perhaps I should have been clearer in my post, or perhaps it’s the fault of sensationalized click-bait headlines. But I think it may be that we’ve become so accustomed to the hype surrounding the science of genes and DNA, so used to hearing about groundbreaking genetics, from the “gene for dry ear wax” to the “gene for Alzheimer’s” to the “gene for [common human behavior]” that we don’t think twice when we hear about mixing bacteria with the “gene for Prozac” to create antidepressant yogurt. The exuberant over-optimism

about the possibilities of genetics, both sequencing and now synthesizing genes, has created outsized expectations of what DNA can do, blurring the lines between science fiction and science fact. We want to sequence our genomes to know ourselves, our personalities, our evolutionary ancestry, our risk factors for everything, to learn what will make us sick and what will kill us. We sign up for 23andMe hoping for specific answers to these questions, but often end up with confusion and contradictory results. We want to synthesize genes and genomes to produce fuels and medicines, solve disease and save the environment, but the more we learn about how genes work inside the cell, the more the looked-for simplicity eludes us. Cells are simply too complicated for the “gene for that” paradigm. This hype affects how non-scientists understand DNA, to be sure, which is enough to make it dangerous on its own. But it also seeps into the goals, grant applications, and discussion sections of technical papers, feeding what UT Austin bioengineer Andy Ellington

calls the “collective fantasy” of synthetic biology. Synthetic biology distinguishes itself from genetic engineering and the biotechnology of the past 40 years by promising that some day we will be able to sit down at our computers and type out what we want cells to do, hit “compile,” and a few days later, the DNA to do it will be mailed to us. Though synthesis technology has expanded exponentially for years, making it easier and cheaper to experiment with designing genetic pathways

, this quick-and-easy genome-scale synthetic biology doesn’t exist yet, and may be another technology that’s always 20 years away. Just as the ability to sequence lots of DNA doesn’t automatically translate to the ability to understand all those sequences

, the ability to synthesize whole genomes

doesn’t mean that we understand the cell enough to build a living organism from scratch. This can be a problem, because although there are many exciting and useful applications of biotechnology today, and many more potential applications in the future, the way that we get there isn’t fixed, isn’t inevitable. The futures we imagine impact the way we pursue our research

and the way we focus our limited resources. To Ellington, this hype also means the potential for excess regulation

, built to control promise that may never materialize, and making it harder to reach that promise in the first place. Hype and big promises can also threaten the already shaky situation of funding and support for applied research, particularly in a field like biofuels or clean energy, now in a post-ethanol and post-Solyndra

era. Both extremes of hype surrounding synthetic biology, the threat of world-ending disaster on one end and the promise of solving all the world’s ills on the other (Drew Endy’s “Half-pipe of Doom

as well as the potential uses and long-term sustainability of new biotechnologies. Science fiction, science journalism, and applied science research inhabit the future, imagining and questioning what is possible, reinforcing each other in complex ways to spark our imagination and enable conversations about what we want the world to be like, what we want and need from new technologies. For artists and designers like Van Balen, design fictions bring emerging technologies to life, imagining how future biotechnologies could impact our lives, bridging the molecular and the human scale. These designs, like good science journalism, can expose a broad audience to future technologies, not to convince or promote a certain research plan, but to invite people to explore and question the role of technology in our lives, to help create useful, safe, and fair technologies for everyone. With such future-looking work, designers must consider the whole life-cycle of the product they’re building; scientists and engineers must engage with the technical, environmental, social, and ethical implications of their work; and science journalists and bloggers like me must acknowledge the role that these stories play in developing technology. When we’re telling the story of new research and new technologies, we’re not only describing the recent past, we’re contributing to the story of how the future is imagined and made.