Psyched Wellness wants to bring the Amanita muscaria fungus to the masses. But are we ready for another psychedelic mushroom boom? 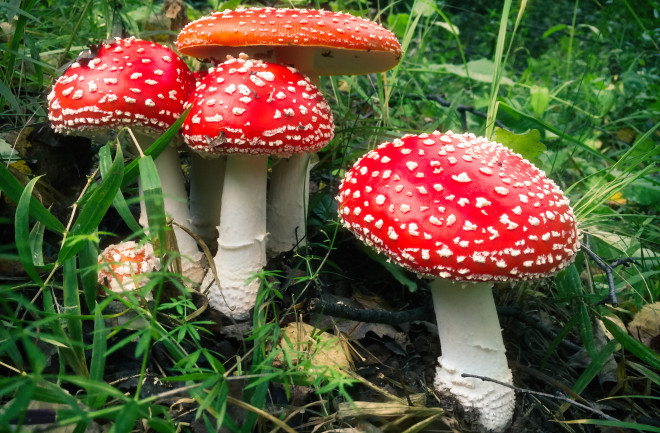 Around two years ago, a former high school science teacher was walking in the woods near Atlanta, Georgia when she came across a common, yet striking mushroom. Many folks are familiar with this fungus, with its distinctive firetruck-red cap speckled by white dots, called the fly agaric or Amanita muscaria. It’s technically poisonous, but while very rarely deadly, it can cause uncomfortable nausea and seizures. It’s also psychoactive, triggering a range of hallucinations that can be stimulating or sedating, depending on the person.

The teacher, who uses the pseudonym Amanita Dreamer, had been planning for this walk to be her last. After years of struggling on prescription benzodiazepines, she made a plan to end her life. But intrigued by this strange toadstool, she took it home, researched it online and then took about 15 grams in a tea after dehydrating it.

“That was probably that natural substance I had been looking for my whole life,” Dreamer tells Discover. “I woke up the next morning, my life was just completely different. I didn't have panic and anxiety probably for the first time in my life. And I never took another benzo, I had no more pain, no more withdrawals, no more nothing.”

Dreamer has since started taking the fungus on a regular basis, which is not recommended by most fungi guides. Still, she claims to receive some benefit from it. She smokes a homemade blend of the mushrooms or sometimes eats the caps.

Dreamer has started a YouTube channel with around 133,000 views dedicated to her experiences with the fungus, and opened an Etsy shop where she sells Amanita products (albeit labeled “not for human consumption.”) Amanita muscaria mushrooms are not illegal to harvest, sell, purchase or consume in the United States and most other countries, but Dreamer still prefers to stay semi-anonymous.

In contrast, Amanita muscaria is almost certainly the most famous mushroom in the world, found on every continent except Antarctica. The emoji for “mushroom” features the toadstool's white-freckled red caps, which have been prominent in everything from The Smurfs to Disney’s Fantasia. And yes, it's sometimes associated with images of someone magically shrinking or growing, like the shrooms in Super Mario or Alice in Wonderland.

Amanita mascara may soon become more than just a pop-culture behemoth, though. It's also grabbed the attention of Psyched Wellness, a Canada-based startup seeking to capitalize on the fungi's potential wellness benefits. “It's kind of a rare situation, because [Amanita muscaria] has been used for centuries," says Psyched Wellness CEO and director Jeff Stevens. "But it hasn't had anyone step up and do the scientific work to get it to the point that you can put it on the shelf."

Because fly agarics are psychoactive, many people confuse these mushrooms for psilocybin “magic” mushrooms, which are being studied by scientists for their therapeutic value in treating depression and PTSD. But the effects of these different fungi are remarkably different. For one, A. muscaria mushrooms do not contain psilocybin. Their primary psychoactive ingredient is called muscimol and it works on GABAA receptors in the body, whereas psilocybin targets serotonin receptors. The subjective effects are quite different.

There is also far less research on muscimol compared to psilocybin, which is celebrated as a primary drug behind the “psychedelic renaissance” in recent years. Psilocybin is the backbone of a handful biotech startups, including Compass Pathways, which has a market cap of $1.4 billion. Muscimol, however, has mostly been ignored by scientists and recreational drug users. But that could be slowly changing, part of the broader mushroom wellness trend that is making fungus like Lion’s mane or Cordyceps popular.

Psyched Wellness is in the process of making an Amanita muscaria extract into an over-the-counter wellness product for potentially treating sleep disorders, stress and even physical pain. The company hopes to have a tincture called AME-1 on store shelves by mid-2022, followed by capsules, teas and topical ointments. They may even pursue it as a prescription drug at some point.

It’s long been possible to (legally) buy Amanita muscaria from online vendors. But before Psyched Wellness’s product appears next to CBD and chaga fungus, the company is doing some real science to unlock the fungi's full potential. In May 2021, the company hired the National Research Council of Canada to study its proprietary extract for potential anti-inflammatory and neuroprotective properties. Psyched Wellness has also contracted KGK Science, a Canadian research organization, for several preclinical oral toxicity study in rodents before moving onto humans. One test reported no adverse effects on treated animals after 14 days.

But Stevens stresses that the doses involved won’t be enough to send someone on a trip. “We're not suggesting at all that this is something that you'd want to use on a macro level. We'll be framing it as microdosing tincture to help alleviate stress, similar to what effect you might have from say, melatonin, or even a glass of wine.”

From Flying Reindeer to Modern Medicine

Psyched Wellness is drawing on a long history of cultural use of Amanita muscaria mushrooms. For example, these mushrooms play a pivotal role in Indigenous Siberian religious practices, which may have inspired the legend of Santa Claus. So far, Psyched Wellness is the only psychedelic startup exploring these mushrooms, which has attracted David Nutt, an English neuropsychopharmacologist at Imperial College London, who is also on the scientific advisory board of Compass Pathways.

Because these mushrooms aren’t illegal, unlike psilocybin, it will be a lot easier (and cheaper) to study them. Two clinical trials on muscimol have been started in the recent past, but both collapsed, allegedly due to funding issues. No data from these studies have been published. The first was started in 2000 to see if muscimol can treat epilepsy, while the other, for Parkinson’s disease, started in 2009. What makes Nutt and Psyched Wellness so sure that muscimol can help people this time around?

“In those days, we hadn't a clue how to use it,” says Nutt. “This was a primitive pre-genome days where people hadn't a clue what they were doing [with muscimol.] I'm not pessimistic because I just think the science has moved on dramatically.”

But wait — aren’t Amanita muscaria mushrooms dangerous? The answer is complicated. Most of the side effects of fly agarics come from another compound present in the fungus called ibotenic acid. This little molecule is the reason these mushrooms are a brilliant red, but also why they sometimes makes people vomit or become comatose.

Ibotenic acid is considered by some to be neurotoxic. In fact, it has been widely used in scientific research to purposefully create lesions in the brains of rodents for studying how systems in the brain interact. But a problem with the majority of these studies is they are somewhat old and describe injecting ibotenic acid directly into the brains of rodents. That’s not really how people would consume the compound if it takes the form of tinctures, teas and capsules, so these findings may not translate. “Ibotenic acid has a really bad, distorted reputation,” Dreamer says. “There were never any oral ingestion studies done. And the biochemistry in the body is just radically different when you inject versus orally ingest something.”

Regardless, it’s not difficult to remove the ibotenic acid from Amanita muscaria. Heat decarboxylates the ibotenic acid, turning it into muscimol, which is much better tolerated. Psyched Wellness has designed a water-based extraction process that leaves only trace amounts of ibotenic acid. The company hopes this will make it safer. “I don't doubt that muscimol can be used both therapeutically and recreationally in a controlled dose,” says Hamilton Morris, a researcher and documentary filmmaker who has made films about the science of Amanita muscaria. “I do imagine that a lot of the problems associated with mushroom consumption could be mitigated in some kind of a standardized extract. I'd be curious to see how that pans out.”

Until more research is done, the full safety profile of Amanita muscaria is still unknown and people like Dreamer could be taking risks with their health. But the cultural ubiquity of this iconic mushroom attests that few can avoid the colorful, magic, strangeness of it all. And there is clearly more to learn from this fungi. “The historical use of Amanita goes back many thousands of years,” says Nutt. “And it's quite likely to be useful in terms of stress reduction, in terms of sleep, possibly even in terms of sociability and helping people bond. It might have prosocial effects. So it's an open book, and it's great to start writing in it.”