Phytol, a chemical that had deadly effects on rats, is being used to cut some cannabis vaporizer fluids. It remains unclear how this ingredient, and other potential vape additives, might affect human health. 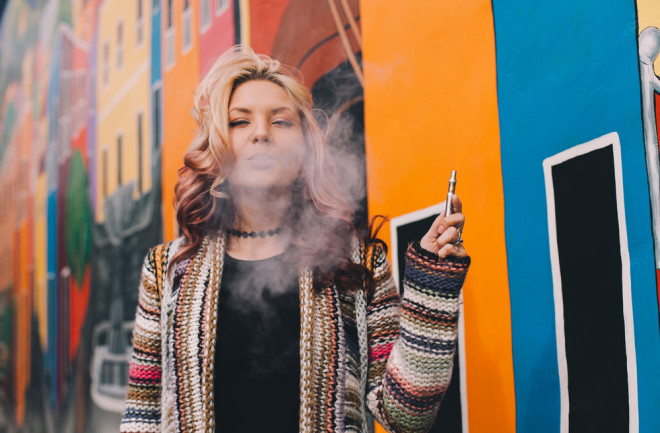 In June 2019, hospitals across the U.S. began seeing cases of lung injuries that were linked to vaping. Patients complained of pneumonia-like symptoms, shortness of breath, cough and chest pain, and also fever, stomach pain and diarrhea. By the following February, 2,807 cases and 68 deaths were reported across all 50 states by the Centers for Disease Control and Prevention (CDC). (That same month, the CDC stopped collecting data on these cases, in part due to a decline in cases and the rise of COVID-19.)

A majority of these cases involved THC (tetrahydrocannabinol) vaporizers, which contain the active ingredient in cannabis, yet the CDC described these injuries as E-cigarette or Vaping use-Associated Lung Injury (EVALI). Most of these vapes were likely sold on the black market, not in state-legal dispensaries, and most injuries occurred in states where cannabis is not legal for adult use, according to a 2020 review published in JAMA Network Open. E-cigarettes and legally-sold cannabis vaporizers were not likely the problem.

Thanks in part to reporting from Leafly, the CDC has narrowed down a likely culprit of EVALI: vitamin E acetate, a chemical commonly used in skin creams and cosmetics. Scientists are still asking questions about how toxic vitamin E acetate actually is when heated and inhaled. So far, all studies of vitamin E acetate toxicity have been studied in rodents or sheep, not humans, according to a February 2021 analysis in the Journal of Medical Toxicology. Another culprit could be causing these injuries, but more research is needed.

The EVALI problem has stopped making major headlines. While some cases are still popping up, deaths seem to have become more rare. Yet, many researchers are concerned about other additives sometimes found in cannabis vaporizers: phytol and pine rosin, two natural products derived from plants that may be harmful when inhaled at vaping temperatures.

The Problem With Phytol

One of the most alarming studies on phytol was published in January 2021 in the peer-reviewed journal Inhalation Toxicology. In that study, 110 caged rats were exposed to either regular air, propylene glycol (PG) synthetic liquid, which is commonly used in vaporizers, or phytol. Phytol is a part of the chlorophyll molecule, so almost any living organism that uses photosynthesis, including algae and bacteria (but especially plants), produce this grassy-smelling compound.

Canopy Growth Corporation, one of the world’s largest cannabis companies, funded the research, which was outsourced to Lovelace Biomedical, a drug development lab in New Mexico. The goal was to develop new “excipients” — that is, inactive ingredients for delivering a drug — in vaporizers.

But the results from phytol were so horrifying that the study abruptly ended. By day two of the experiment, many of the rats exposed to phytol were found dead in their cages. The others were on the verge of death and needed to be euthanized. (The rats exposed to PG and air were not sickened and finished the experiment.) When dissected, the phytol rats had discolored, severely degenerated lungs. Some experienced “epithelial necrosis,” which means parts of their noses, throats and lungs dissolved. The longer the rats were exposed, the more severe their injuries, meaning the results were dose-dependent.

Other than this study, the inhalation toxicity of phytol has not really been investigated before. A 2015 report of phytol incubated with mouse skin cells found “low toxicity,” but otherwise, there isn’t much out there.

“A safe dose or exposure level was not identified in this study so we are unable to comment on whether phytol as an additive (beyond typical levels naturally found in cannabis flower) is safe to inhale,” says Mark Ware, Canopy's chief medical officer, who was not involved in the research. “In our view, until there is research identifying exposure level that does not produce adverse health effects, manufacturers should not add phytol to cannabis vaping products.”

The levels of naturally-occurring phytol in cannabis is so low — around 1 percent — that smoking or vaping unadulterated weed probably poses no risk, Ware says. Cannabinoids like THC and CBD are very viscous, meaning to turn these cannabis extracts into something you can vape, you need a cutting agent. Even though there is barely any safety data, some manufacturers, both licit and illicit, have used phytol and vitamin E acetate in their vapes.

“I would be wary about a product that contains large amounts of phytol. Not so much really tiny amounts of phytol,” says Robert Strongin, a chemistry professor at Portland State University who studies cannabinoids and vaping. “I think this is going to come down to a dosing thing. It definitely warrants caution.”

Still, Strongin is also cautious about this data and how it is interpreted. For example, the rats were exposed to chemicals that were not heated and the study notes that this experiment “does not reflect aerosol generation through vape pens.” Instead, the researchers measured the size of particles in the exposure atmosphere, which they say can compare to vape pens.

Some companies aren’t taking chances with phytol. In late July 2020, before the phytol study was published, Tokyo Smoke, a company owned by Canopy, looked at the data and gave their suppliers an ultimatum: Remove the ingredient or find a new customer. Any products that contained phytol were pulled from shelves.

“As a precaution based on the results of the Lovelace study, we took immediate steps to cease the sale of 13 third-party vape cannabis products,” Ware says.

Phytol isn’t the only concerning ingredient that might be added to cannabis vaporizers. In 2020, Strongin’s lab was the first to report pine rosin being used in cannabis extracts.

Also known as colophony, pine rosin comes from trees, like the name implies. It’s commonly used in inks, adhesives, varnishes and plasticizers and is extremely toxic to inhale. “Rosin is a known respiratory tract irritant and a significant contributor to occupational asthma due to its use in soldering,” Strongin and his colleagues wrote in Forensic Science International.

Strongin soon found reports on Reddit of people being ripped off and being sold cannabis extracts that contained pine rosin instead. (Pine rosin is different from the cannabis concentrate sometimes called “rosin,” which is made without using solvents like butane.)

“That was the first paper I ever published on a preprint server, before peer review, just to get the word out as quickly as possible,” Strongin says. “I sent it to the NIH [National Institutes of Health], to my program officer and he passed it around to the FDA and CDC. So hopefully, our work raised awareness.”

So far, reports of pine rosin in cannabis extracts have been few and far between. But that could be because some places just aren’t testing for it. “I don't know for sure, but we don't think the analytical methods that the government is using would detect it, the way they're actually going about this compared to how we had to find it,” Strongin says.

To Vape Or Not To Vape?

According to Ballotpedia, roughly 46 percent of Americans live somewhere adult-use cannabis is legal, while 71 percent have access to medical marijuana. Ultimately, cannabis use isn’t going away. So rather than simply saying “don’t vape,” people should understand the risk they might be taking with their health, Strongin says. But there are justifiable reasons to vape as well — some see it as safer than smoking plant matter, and the effects are more immediate than edibles so it can better help with pain management or replacing opioids, for example.

“I think we should be cautious, definitely don't get anything from a non-licensed [place]. All we can do is minimize our risk by staying with licensed dispensaries,” Strongin says, suggesting discussing ingredients with employees at dispensaries. “Stay away from products with stuff that you're not quite sure of, especially with high levels of solvents and things like that.”

Unfortunately, the legal cannabis market isn’t well regulated. Some legally-sold CBD vapes, for example, have been studied and found to contain things like synthetic cannabinoids or cough syrup ingredients like dextromethorphan (DXM).

However, vaporizers on the black market aren’t regulated at all, so the risk of inhaling contaminants from cannabis vapes are even higher in places with marijuana prohibition. It may be best to avoid underground vaporizers altogether.

According to Leafly, phytol is allegedly “shadow banned” in Canada, meaning regulators won’t approve products that contain it, but haven’t officially banned it. However, in the U.S., cannabis products generally don’t need regulatory approval before they hit store shelves and for now, it is perfectly legal to add phytol in vaporizers. Until better regulation comes through, people who vape cannabis should check the label and confirm what they might be inhaling. Or, maybe just stick to smoking a joint or eating a brownie — where local laws allow.