Antibiotic resistance is one of the most pressing issues affecting public health today, and there is no other bacterial organism that better represents the urgency of this threat than MRSA, methicillin-resistant Staphylococcus aureus. This ubiquitous bacteria plays two roles, both as a skin-dwelling commensal and disease-causing pathogen, and is one of the most prevalent and deadly disease-causing bacteria in our communities at large and in our hospitals in particular. An early chapter of its ongoing metamorphosis from skin floral bug to virulent antibiotic-resistant pathogen took place in an unlikely setting: among a population of injection drug users living in Detroit in the early 1980s who were partaking in an unusual practice of homegrown infection prevention. 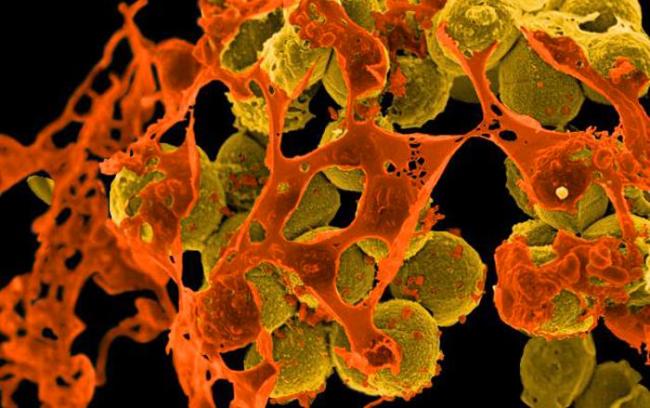 A digitally enhanced scanning electron microscopic (SEM) image of methicillin-resistant Staphylococcus aureus (MRSA) bacteria in a mustard color, which are surrounded by orange-colored cellular debris. Image: National Institute of Allergy and Infectious Diseases (NIAID). The discovery of the antibiotic penicillin and its introduction into the practice of medicine in 1941

changed the landscape of medicine.(1) The antibiotic was a life-saving therapeutic extracted from mold that suddenly could cure intractable and fatal infections. Within just two years, however, physicians identified patients infected with bacteria resistant to the power of penicillin,

Staphylococcus aureus being one of the first organisms equipped with a gene to thwart the new wonder drug.(1)(2) In five years, 50% of S. aureus strains were resistant to penicillin.(3) By the 1960s, penicillin-resistant S. aureus had seeped from the hospital environment into the community at large, and this antibiotic-proof bug, once delimited by healthcare settings, could be found in homes, schools, and the workplace.The same perturbing pattern was seen within a year of the introduction of the antibiotic methicillin in 1961, a drug specifically designed to treat penicillin-resistant S. aureus. Clones of methicillin-resistant Staphylococcus aureus (MRSA) emerged in the United Kingdom before sweeping the globe, appearing in hospitals as far away as Japan, Australia, and the United States.(4) This new phenomenon was initially viewed as a problem produced by the hospital itself, the bacteria acquiring resistance upon exposure to antibiotics in that contained environment and subsequently causing nosocomial or healthcare-associated infections in other patients. But an astonishing outbreak in Detroit in the early 1980s completely upended this assumption and ushered in a new era of thinking about the looming specter of antibiotic resistance.In March of 1980, men and women began trickling into the emergency room at Henry Ford Hospital in Detroit bearing an assortment of infections, from painful abscesses and tender skin boils to drenching fevers caused by life-threatening heart and blood infections. This initially provoked little surprise among physicians in the emergency department - many of these ill patients reported a history of intravenous drug use while others were repeat customers to the ER and hospital.(5) What was unexpected, and soon became frankly alarming, was that many were infected with MRSA, a very rare culprit of infections in the city at that time, responsible for only 7% of all bacterial infections in Henry Ford.(6)Over the course of a year and a half, 40 people in Detroit would be hospitalized with this new bug. Of those patients, two-thirds reported using intravenous drugs, a risk factor that precludes to many different types of serious infections. However, many of the men and women living in Detroit and using drugs reported a novel practice of preventing infection of the injection site: using non-prescribed oral antibiotics purchased from street sources.(7)(8) These black-market antibiotics were most commonly of the cephalosporin class, a broad-spectrum therapeutic that cannot prevent or treat MRSA. Not only were these antibiotics purchased through improper channels, but they were also used inappropriately: one patient reported taking cephalexin three times a day for a year, though the drug is typically prescribed for twice a day for under two weeks, depending on the type of infection.(9)

As a group of physicians witnessing this unusual outbreak at Henry Ford would later discover, “drug abusers periodically medicate[d] themselves with antimicrobial agents to avoid septic complications, and some abusers have used antimicrobials prophylactically, which may select for resistant strains ... Widespread use of cephalosporins on the streets of Detroit has played a role in selecting for methicillin-resistant S. aureus.”(5)

Historically, antibiotic resistance was thought to begin with the hospital. The Detroit outbreak upended this assumption, providing one of the first documented instances of community-acquired MRSA transmitted within the hospital, from outside to inside. In the first two months of 1982, just ten months after the arrival of this new superbug, MRSA infections accounted for 30% of all S. aureus

infections in the Henry Ford Hospital, while three years prior it had accounted for only 1 to 7% of all bacterial infections, including S. aureus.(5)(6) Even with standard protocols in place to control the spread of dangerous pathogens, the bug was able to disseminate in the hospital to physicians, nurses, and patients.

The 1980 Detroit outbreak was also notably the first outbreak of MRSA infection among intravenous drug users. In five years, MRSA among this population became commonplace, “accounting for 50% of bacteremias [blood-borne infections] in heroin abusers.”(10) How it spread among this particular community is unknown, though person-to-person transmission via sharing of needles was presumed to be the most likely mechanism. From the moment antibiotics were introduced into hospitals, bacteria began developing their own countermeasures. The 1980 Detroit outbreak was a watershed moment in medicine, proving that drug-resistant bacteria could emerge from beyond the hospital. The mechanism was still the same, relying on the use of antibiotics, whether from the prescription pad or the street corner, to force and affect the evolution of bacteria in the social environment. The epidemiology of S. aureus in the city had transformed in just under two years, a harbinger of what would soon occur worldwide, a phenomenon of increasingly dire import.From the Body Horrors ArchivesThe Magic Arrow: Penicillin & the Recurrin’ UrineA Moldy Cantaloupe & The Dawn of PenicillinResources Maryn Mckenna has long been warning the public about the threat posed by antibiotic-resistant bacteria. I highly recommend her amazing book Superbug: The Fatal Menace of MRSA about the evolution of MRSA as well as her blog at National Geographic, Germination, where she writes about these issues and more. References 1) J Turnidge et al. (2008) Staphylococcus aureus. Antimicrobe. Accessed online 11/17/2016 at http://www.antimicrobe.org/sample_staphylococcus.asp 2) HF Chambers (2001) The Changing Epidemiology of Staphylococcus aureus? Emerging Infectious Diseases.7(2): 178-182 3) RL Oehler (Unknown) MRSA: Historical Perspective. Antimicrobe. Accessed online 11/17/2016 at http://www.antimicrobe.org/h04c.files/history/MRSA-Oehler.pdf 4) MC Enright et al (2002) The evolutionary history of methicillin-resistant Staphylococcus aureus (MRSA). Proc Natl Acad Sci USA. 99(11): 7687-92 5) Saravolatz et al. (1982) Methicillin-Resistant Staphylococcus aureus. Annals of Internal Medicine.96(1): 11-6 6) M McKenna (2010). Superbug: The fatal menace of MRSA. New York: Free Press 7) Centers for Disease Control (CDC). (May 1, 1981) Community-acquired Methicillin-Resistant Staphylococcus aureus Infections - Michigan. MMWR.30(16): 185-187 8) AL Cohen et al. (2007) Methamphetamine Use and Methicillin-Resistant Staphylococcus aureus Skin Infections. EID. 13(11): 1707-13. 9) DP Levine et al. (1982) Community-Acquired Methicillin-Resistant Staphylococcus aureus Endocarditis in the Detroit Medical Center.  Annals of Internal Medicine.97(3): 330-338 10) LE Saravolatz et al. (1985) Comparison of methicillin-resistant and methicillin-sensitive Staphylococcus aureus bacteremia. Am J Infect Control. 13(3): 109-14