The Liver Grows by Day, Shrinks by Night 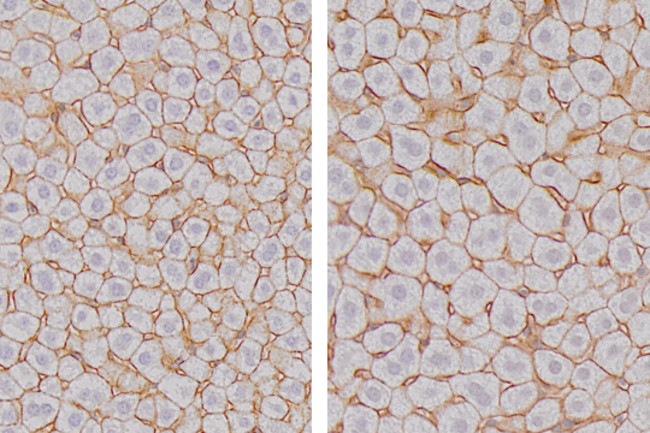 Mouse liver cells at the end of the day (left) and the end of the night (right) after they have grown. (Credit: Ueli Schibler/University of Geneva) Among all the organs in the human body, the liver is something of a superhero. Not only does it defend our bodies against the liquid toxins we regularly ingest, it has the ability to regenerate itself, and, as new research shows, it increases its size by nearly half over the course of a day. Working in mice, researchers in Switzerland documented this process of regular stretching and shrinking, watching as liver cells swelled in size and contracted up to 40 percent along with the mice's daily activities. There's a catch though, a kind of hepatological kryptonite. Their livers only exhibited this ability when the mice followed their normal cycles of eating and resting. They're nocturnal creatures, and if they began eating during the day when they usually rest, their livers stubbornly refused to grow.

The liver is the only organ known to display such significant cyclical growth, although it does make sense. During the half of the day when we're not eating, our organs have far less to do. By growing and shrinking to meet demand, our livers are actually trying to save us wasted energy. The Swiss researchers say that they observed hepatocytes, the main kind of cell in livers, growing during the night when mice were active, something they they attribute largely to an increase in ribosomes, structures in cells that take RNA instructions and use them to produce proteins, among other things. The liver takes material from the food and converts it into useful proteins and other molecules crucial for bodies to function, so possessing more ribosomes means they're that much better at their jobs. When their daily cycle comes to a close, livers begin breaking down the ribosomes again, like street vendors packing up for the night. It makes sense that livers would swell when they have to work the hardest. What the researchers found, though, was that it's not just food intake that tells the liver to ramp up ribosome production — it's also dependent on what time of day it is. Cells in our livers are also sensitive to circadian rhythms and they found that mouse livers would only begin to grow at night when they ate. Mice fed during the day did not exhibit the same kind of liver growth that their nocturnal counterparts did. The cues that tell the liver to begin preparing for action don't just come from our food, in other words, they also come from the environment. Because a bigger liver can work faster and pull out nutrients more efficiently, there's an obvious advantage to maintaining this kind of cycle. In mice kept nocturnal, there was a noticeable smooth curve of growing and shrinking, and the researchers noticed a 1.6-fold difference in the level of proteins in the liver between the two extremes. In day-fed mice, there was no difference, indicating that their livers weren't able to produce as much. They published their work Thursday in Cell.

But Can We Do It?

There is evidence that human livers may exhibit the same ability, although our only source is a single 1986 study that used ultrasound to measure people's livers over the course of six hours. They found variations of around 20 percent, although they didn't take any measurements during the night, when our bodily rhythms slow down. These findings in the liver add to a mounting case for returning to sleep cycles based on environmental cues. Illuminating the night with artificial brilliance has been tied to disrupted sleep cycles in humans, as well as an increased risk for obesity, diabetes, depression and some types of cancer. For millennia, our bodies regulated themselves with the daily rising and setting of the sun, ramping us up when it was light and settling us back down when it got dark. Now, it appears that this extends to our digestive systems as well. Our livers cleanse toxins from our bodies, produce proteins and chemicals necessary for digestion, recycle old red blood cells and regulate glycogen levels in our bodies. If they aren't working properly, we can die. While the authors don't address the implications of their work for humans, their findings could help to explain why its seems to be so unhealthy to push bedtime further and further back.