The deciding game of college football's Mythical National Championship, in which Northern power in the form of the Ohio State Buckeyes will put a serious hurt on Southern speed in the form of the Florida Gators, isn't until next week. But yesterday we had the two important games of the season. One saw plucky Boise State finish an undefeated season by squeaking past perennial powerhouse Oklahoma, in a 43-42 overtime thriller that is guaranteed to go down as one of the best college football games of all time. 22 combined points in the last minute and a half of regulation, breathtaking trick-play laterals, gutsy two-point conversions, and a happy ending to boot. It'll be hard to beat that. The other important game was the Outback Bowl, since any game featuring Penn State is automatically important. The Nittany Lions smartly dispatched the favored Tennessee Volunteers, 20-10, adding to coach Joe Paterno's all-time-best bowl victory total. But, as exciting as the game undoubtedly was (what would I know, I was on an airplane as usual), the only reason we mention it here on our ponderously serious blog is to point to this terrific animated summary of the game from Tennessee site Rocky Top Talk. 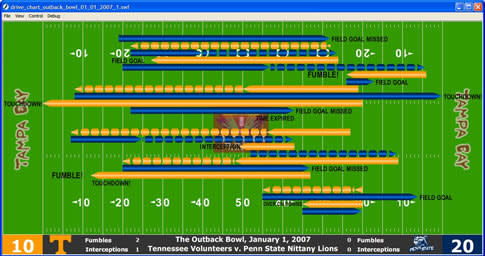 Click to get the full animation, which colorfully summarizes every drive of the game. (Dashed lines are punts, in case you were wondering.) Some day all sporting events will be virtual; those of us with basic subscriptions will only have access to animated summaries like this, while those who spring for the premium service will get to see artificial highlights generated by the best computer graphics available at the time.