How the decades-long conflict led to today's increasingly impotent antibiotics. 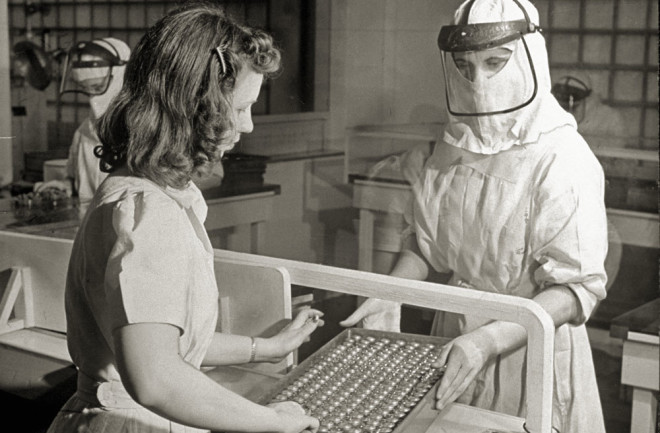 When the World Health Organization issued a report last February highlighting the antibiotic-resistant bacteria that posed the gravest public health threats, it capped a disheartening year. A powerful variety of E. coli reached American shores, and a Nevada woman died of an infection untreatable by available antibiotics.

While it’s not time to panic, the stakes are high. The U.S. sees about 2 million resistant infections every year, and medical professionals still have no real solutions. If additional resistant bugs develop, or if the existing ones take over, our modern way of life would end. Infected paper cuts and blisters could prove deadly; surgeries would become more risky. Crop yields would plummet.

Chalk it up as one more casualty of the Cold War.

Geopolitics and antibiotics have crossed paths ever since the birth of the wonder drugs.

When Australian pathologist Howard Florey and British biochemist Norman Heatley first brought Penicillium notatum spores to the United States in 1941, they were already proven to be effective against a wide variety of bacteria. Washington took an immediate interest. A government lab volunteered to help develop a more efficient means of producing the life-saving mold, and soon after, private pharmaceutical companies were brought in: Merck, Lederle Laboratories, E.R. Squibb and Chas. Pfizer.

Even before entering World War II, the United States was sending aid to Britain, with factories churning out ships and planes. Why should antibiotics be any different? Penicillin promised to reduce Allied casualties, a strategic advantage. Sick soldiers could not fight; healthy armies won wars. Developing the drug cheaply and plentifully was essential for national security. It was win-win for the U.S. and the drug companies.

“For the American and British antibiotic-producing companies, penicillin was strategic in financial terms,” says historian Mauro Capocci of Sapienza University in Rome. “In military terms, antibiotics were useful on the battlefield. Basic medical care in the civilian population would also greatly improve.”

As the world shifted to the Cold War, and capitalist democracies jockeyed against communist dictatorships, antibiotics emerged as political instruments. Soviet bloc nations wanted access to antibiotics, and the U.S. and U.K. subsequently attempted to control distribution. With penicillin’s patent in the public domain, however, they could only do so much. Rather than controlling the drug itself, Britain and the U.S. regulated access to the machinery essential to the deep fermentation technique needed to mass-produce penicillin.

As the world shifted to the Cold War, and capitalist democracies jockeyed against communist dictatorships, antibiotics emerged as political instruments.

As tensions remained high, and as antibiotics became harder to produce and acquire in Soviet states, the world’s scientists were cut off from each other, ending a free flow of information and inadvertently giving rise to “Western” and “Soviet” science.

In the West, antibiotic research produced a number of so-called broad-spectrum drugs that used a scorched-earth approach. These killed lots of bacteria — even the body’s helpful ones. This quickened the onset of resistance, as any surviving bacteria were bound to be more hardy.

Soviet scientists took a different approach, researching “medicinal botanicals,” or whole plant-based medicines, and bacteriophage therapies, which took advantage of viruses that attack bacteria. The latter are notable for their potential specificity — the right virus could destroy only the offending bacteria, leaving the rest of the body alone. But the approach was dismissed by Western scientists, who just never studied phages enough to trust them.

Bacteriophage therapies weren’t enough, though, and Soviet pharmaceutical plants eventually sprang up in many Eastern European countries, helping fill Russia’s need for antibiotics. Although the plants could produce penicillin and other popular antibiotics, the methods were much less efficient, and the purity varied.

“Distribution was also a problem, as the industry lacked adequate vials and packaging materials, and much production was spoiled,” says medical historian Mary Schaeffer Conroy, author of Medicines for the Soviet Masses During WWII. “Soviet pharmacologists focused on medicinal botanicals because of shortages of chemically synthesized medicines.”

As a result, Soviet pharmaceutical companies churned out billions of units of questionable drugs that were only partially effective at normal dosages, weakening bacteria but not killing them outright — an environment perfect for spurring antibiotic resistance.

When resistance became a problem, it proved literally unbelievable to the rest of the world. The Washington Post and Times-Herald reported in 1956 that Soviet health officials had declared that penicillin no longer worked against venereal diseases. Charles Rein, a consultant for the WHO, responded: “They either have a different brand of syphilis in Russia or a different kind of penicillin.” The Soviet Union did not have a reliable supply of antibiotics until the 1980s.

In addition to helping bring about these conditions in Soviet countries, the West also played a more direct role in bringing about today’s antibiotic resistance crisis. After WWII, Europe’s battered countries needed help resuscitating their economies. Industry and agriculture sputtered, often hampered by antiquated techniques. Washington feared communism could spread through Europe, so the Marshall Plan emerged as a solution. Designed to provide economic aid to struggling nations, the plan entailed everything from monetary packages to beneficial trade deals.

Meanwhile, American scientists discovered that adding antibiotics to animal feed not only protected the animal from disease, but also caused livestock to grow faster. (Scientists believe it’s due to changes in the bacterial balance in an animal’s gut.) Antibiotics helped pave the way for today’s massive modern agricultural businesses.

“In the 1950s, extension agents, land-grant scientists and pharmaceutical companies all championed antibiotics as a means to increase production while lowering costs,” says science historian Alan Marcus of Mississippi State University. The popular media portrayed them as being better for animal development than vitamins.

American experts spent much of their time teaching this novel aspect of agriculture at home and abroad as part of the Marshall Plan. The techniques were adopted to varying degrees around the world; they were stunning successes, economically and psychologically. The ability of many more people to afford meat enlisted goodwill and economic support during the Cold War.

However, society is still paying the price for the widespread use of antibiotics in agriculture. Since the 1960s, scientists have cited this use as a major cause of bacterial resistance.

Fast forward 50 years, and the liberal use of antibiotics, on patients and on livestock, has left today’s scientists and public health officials in crisis. New bacteria resistant to antibiotics appear at disturbingly high rates. Some 23,000 people die every year in the U.S. from resistant infections, with health care costs projected up to $20 billion. Rates are similar in the European Union, and studies project it will get worse.

Many major pharmaceutical companies have stopped researching and developing new antibiotics altogether, shifting more of that responsibility to smaller, nimbler biotechnology startups. Yet about half these companies are considered “pre-revenue,” meaning they have no products on the market yet. The limited potential profits of antibiotics can’t compete with moneymaking drugs that treat chronic diseases such as diabetes.

Partly because of Soviet and Western practices, penicillin has lost much of its effectiveness over the decades due to today’s resistant pathogens. Daily Herald Archive/Getty Images

Scientists are scrambling to discover new drugs and novel types of antibiotics — something that hasn’t happened in more than 30 years. According to a review conducted by the Pew Charitable Trusts, as of March 2017, at least 40 new antibiotic drugs were in various stages of development. “However, given the inevitability that some of these antibiotics will fail to win approval, it is clear that there are too few drugs in development to meet current and anticipated patient needs,” according to a 2016 report from Pew.

The Cold War may have ended decades ago, but its effect on antibiotics — and treating diseases — lives on.