Reducing our intake of animal products can help us — and our planet — live longer, healthier lives. 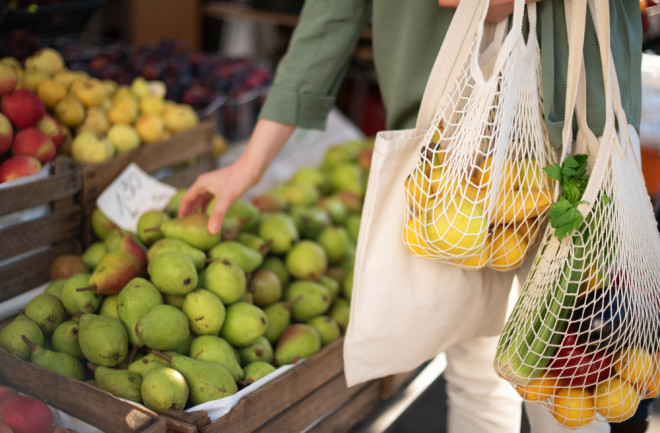 Forest fires, hurricanes, floods, droughts, species extinction — the news can be pretty bleak. Instead of throwing up our hands and feeling helpless, we each have the power to help the health of the planet and ourselves simultaneously, says registered dietician Dana Ellis Hunnes in her new book, Recipe for Survival, what you can do to live a healthier and more environmentally friendly life.

“If people were willing and able to reduce their meat and dairy intake by half, it would have a huge impact. We would probably save a third of the water and land we use, and we could feed more people,” she says. Almost half the food humans grow is used to feed animals. Eating a plant-based diet requires significantly less land, water and energy, according to a 2003 studying in The American Journal of Clinical Nutrition.

“When we talk about climate change, the talk is mostly about emissions from cars, emissions from energy,” Hunnes says. “So rarely do we hear about the food connection.”

Animal products we eat — meat, dairy, eggs and fish — contribute more to climate change, sea-level rise, ocean acidification, dead zones and global extinction rates than all of the cars, planes and ships in the world combined, Hunnes writes. A 2006 study by the Food and Agriculture Organization of the United Nations backs this claim up, and while the data has been reassessed over the years, livestock continues to account for a large share of total global greenhouse gas emissions.

A plant-based diet also can be healthier for people than a traditional Western diet, decades of research shows. In the late 1990s, a 20-year study analyzed people living in 65 rural counties in China, conducted by researchers from Cornell and Oxford Universities and the Chinese Academy of Preventive Medicine. They found that those on a plant-based diet had significantly lower rates of heart disease, diabetes and cancer than the meat and dairy eaters in the more affluent regions. That study inspired a best-selling 2006 book, The China Study, by one of the study's lead authors, T. Colin Campbell, and his son.

For the average American today, 15 percent of their diet consists of protein, and about 80 percent of that protein comes from animals, according to Campbell, who is a nutritional biochemist and retired Cornell professor. By comparison, in rural China, 10 percent of people’s diet contains protein, only 10 percent of which is from animal sources, which is a key distinction in Campbell's push toward plant-based diets.

In Hunnes' view, people on plant-based diets eat plenty of protein to meet their nutritional needs. The Recommended Dietary Allowance for protein is only 0.4 grams per pound of body weight.

“Almost every food, even an apple, has a tiny bit of protein. As long as you are getting enough [nutritious] calories in your diet, it is hard to be protein deficient in a country like the United States,” Hunnes says.

In rural counties in China where people consumed more dairy, the population had higher rates of cancer in the parts of the body related to the reproductive system — breast, prostate and uterus, says Campbell.

“Nutrients from animal-based foods increased tumor development while nutrients from plant-based foods decreased tumor development,” Campbell says. Based on what he and his colleagues were seeing in their research, Campbell and his family reduced and then stopped their red meat consumption over three years. They still ate chicken, fish, milk and cheese, but gradually transitioned to a whole foods, plant-based diet. As hard as it was to give up cheese, he says, the evidence was irrefutable. “I know nothing else in medicine that can come close to what a plant-based diet can do.”

Plant-based diets are nutrient-dense, and low in calories, saturated fats and trans fats — which can help ward off many nutrition-related chronic diseases, such as heart disease, type 2 diabetes, and stroke. It's the total diet that really matters — not eating animal food of any kind and staying away from refined carbohydrates, either sugar or starch, insists Campbell. At age 88, he has written four books since retiring at 67, walks two miles a day and takes no medications. “We have to eat the whole food. From a biological perspective, this gives the body the chance to choose which nutrients it wants to use.”

Are Fish and Eggs OK?

While fish are an excellent source of Omega-3 fatty acids and protein, for the general population, evidence suggests a whole food, plant-based diet “is more effective at preventing and mitigating heart disease than is adding fish and fish oil to a not-so-great diet,” Hunnes writes. And she defines that whole-food diet as high in fiber, monounsaturated fats such as virgin olive oil, peanut oil, sesame oil and avocado, and plant-based Omega-3 fatty acids, found in walnuts, chia and flax.

Industrial fishing operations have overexploited some of the world’s fish stocks, she writes. Some 90 percent of large, sexually mature fish and more than 97 percent of southern bluefin tuna have been extracted from the ocean, Hunnes says. Freshwater fish populations also are on the decline due to overfishing, climate change and pollution, according to a 2020 report from the World Fish Migration Foundation.

“I advocate leaving fish in the ocean. Eighty to 90 percent of the catch isn’t the fish they’re intending to catch,” she says, which means that fish, or bycatch, often gets wasted, robbing the ocean’s ecosystem of its diversity. However, Hunnes adds, for those whose doctors prescribe fish oil to lower their cholesterol, eating the actual fish is preferable over the fish oil.

The industrial egg operation involves hens raised in cages with no room to move; this results in air pollutants from nitrogen and ammonia and water pollution from the chicken manure runoff, she says. Free-range eggs, which come from hens allowed to roam naturally and eat from the ground, produce much less waste and are healthier for people because the hens’ diet is healthier, she says.

Some of these dietary shifts do involve changes in your daily life or budget. Patients, for example, sometimes tell Hunnes they can’t possibly eat the recommended nine servings of fruits and vegetables a day. In that case, she points out that it’s possible with a little planning.

Hunnes and her husband each work full time and are raising a son, so to save time, they plan their week’s menus, create a grocery list and spend about an hour chopping and cooking vegetables on the weekends that will be their side dishes all week.

While she concedes some people would rather eat today’s American diet, she hopes they’ll consider swapping some animal-based foods for plant-based foods for the sake of the next generation.

“Find that thing that inspires you to want to improve your own health, your wellbeing,” she says. If that’s not enough of a motivator, “do it for your kids or your grandkids who want to have a grandparent around and a healthy planet that can support them.”