The arc of evolutionary genetics is long

Evolutionary ideas have been around a long time, at least since the Greeks, and likely longer. I accept the arguments of researchers who suggest that humans are predisposed to Creationist thinking; after all, cross-cultural data shows the dominance of this model before the rise of modern evolutionary biology. But this does not mean that the possibility of evolution would be totally mystifying to the human race before Charles Darwin's time. After all, it may be that humans as a species have a predisposition toward theism as well, and yet all complex societies produce atheistic movements as counter-cultures, the Epicureans* among the Greeks, Carvaka among the Indians and the Dahrites among the Muslims. Rather, what made Charles Darwin so important was the theoretical heft he brought to the idea of evolution, which was in the air at the time. In the early 20th century Darwin's verbal insights were given more formal structure by theoreticians such as R. A. Fisher and Sewall Wright. These population geneticists aimed to turn the helter skelter and descriptive clarity of evolutionary biology into a more predictive science through their mathematical frameworks. But despite the heroic efforts of biologists such as E. B. Ford testing these theoretical predictions before the molecular genetic era was often not feasible. In the age of genomics this is changing, as large data sets can now be viewed with an aim toward extracting out theoretical generality, or violations from expected generality. But another advance, aided by molecular techniques, is experimental evolution. The most prominent practitioner today of this field is Richard Lenski, and he is co-author on a new paper which looks at the rate of evolution over time in E. coli. Genome evolution and adaptation in a long-term experiment with Escherichia coli:

The relationship between rates of genomic evolution and organismal adaptation remains uncertain, despite considerable interest. The feasibility of obtaining genome sequences from experimentally evolving populations offers the opportunity to investigate this relationship with new precision. Here we sequence genomes sampled through 40,000 generations from a laboratory population of Escherichia coli. Although adaptation decelerated sharply, genomic evolution was nearly constant for 20,000 generations. Such clock-like regularity is usually viewed as the signature of neutral evolution, but several lines of evidence indicate that almost all of these mutations were beneficial. This same population later evolved an elevated mutation rate and accumulated hundreds of additional mutations dominated by a neutral signature. Thus, the coupling between genomic and adaptive evolution is complex and can be counterintuitive even in a constant environment. In particular, beneficial substitutions were surprisingly uniform over time, whereas neutral substitutions were highly variable

The experiment involved a line from the ancestral colony which was maintained for approximately 15 years. The use of the term "counterintuitive" in some ways is a bit deceptive; would the person off the street find the results counterintuitive? I doubt it. Rather, intuitions here are actually framed by deductions one makes from theoretical assumptions about the nature of molecular evolution and the genomic impact of natural selection. For example, we expect that adaptation should converge upon an optimum and exhibit deceleration. Or that the rate of substitution should equal the rate of mutation. Figure 2 illustrates the gist of the results: 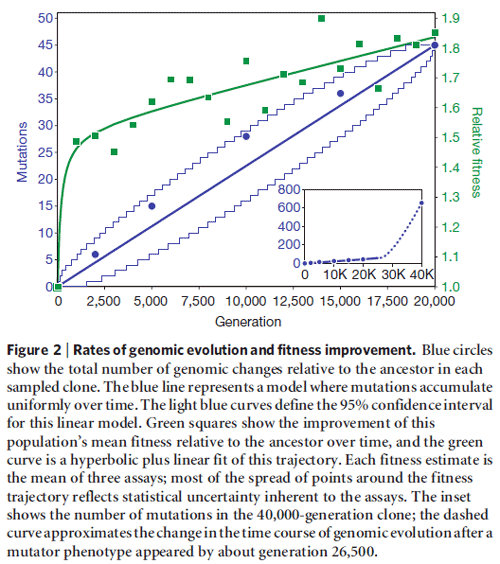 The "fitness" lines up with our expectations. When you have a population which is switched to a new environment you expect that it will adapt as best as it can quickly, and over time "fine-tune" those adaptations and reach some sort of equilibrium. On the other hand, it looks as if two "neutral" equilibriums were at work (see inset), one before the emergence of a hypermutant strain, and one after. Remember that to a great extent evolutionary change should be proportional to mutation rate on the molecular level if most molecular change is not subject to selection pressure. A simple explanation for what's going on above is that only a small fraction of genetic changes are beneficial, and so neutral evolution was predominant. The relative strength of adaptive evolution in the early stages would have been of marginal significance when set next to dominance of neutral effects, so its removal would not have been noticeable. The authors reject this simple model for four reasons: - All 26 point mutations they found in coding regions were non-synonymous before the emergence of hypermutability. That means that they actually effect changes in amino acid and so function. This is very unlikely, so the inference must be that functional changes are driving this evolution. - There were 12 total lines, though they only focused on one in this paper. But, neutral evolution would have distributed mutations randomly across genes, and so there shouldn't be much concordance across the lineages. In fact, there was a great deal of concordance, as the same genes were targets of mutation repeatedly across experimental populations. This parallelism is a strong indication that selection was targeting specific functional regions for specific traits. - In a situation where neutrality is dominant there should be many lines where the frequencies of the mutants are intermediate as they "random-walk" up and down the range of potential frequencies. But this was not so. Rather, there was a trend toward fixation. Once a selectively favored mutant avoids extinction its probability of sweeping to fixation is rather high. In contrast, a neutral allele which is extant at frequency ~0.25 in a particular generation still has a 75% chance of going extinct. - The new mutations do seem to confer fitness advantages vis-a-vis the ancestral strain. Obviously if a mutation is neutral it shouldn't confer fitness advantages. One explanation they have for the relatively constant rate of the emergence of mutational variants is that the initial mutants are of large effect, and have negative pleiotropic effects. In other words, in a new environmental circumstance populations look for "good enough solutions," or kluges, which introduce deleterious trade-offs. There's still plenty of room for adaptive improvement and later mutations are driven to fixation in large part as solutions to the problems introduced by the earlier mutation. Additionally:

At some point the dynamics shift in a discontinuous manner, as a hypermutable lineage emerges at 40,000 generations. Whereas before all 26 of the mutations in coding regions were synonymous before hypermutability, only 83 of 599 were after. This suggests that the basal mutation rate has increased and neutral dynamics have become more powerful; in other words, the background noise has been cranked up considerably. They estimate that the point mutation rate increased about 70-fold after the emergence of the mutator phenotype, almost two orders of magnitude! Here's their conclusion:

Genome re-sequencing in the context of experimental evolution provides new opportunities for quantifying evolutionary dynamics. We observed discordance between the rates of genomic change and fitness improvement during a 20-year experiment with E. coli in two respects. First, mutations accumulated at a near-constant rate even as fitness gains decelerated over the first 20,000 generations. Second, the rate of genomic evolution accelerated markedly when a mutator lineage became established later. The fluid and complex coupling observed between the rates of genomic evolution and adaptation even in this simple system cautions against categorical interpretations about rates of genomic evolution in nature without specific knowledge of molecular and population-genetic processes. Our results also call attention to new opportunities for population-genetic models to explore the longterm dynamic coupling between genome evolution and adaptation, including the effects of clonal interference, compensatory adaptation, and changing mutation rates.

Citation: Nature, Genome evolution and adaptation in a long-term experiment with Escherichia coli, 18 October 2009, doi:10.1038/nature08480. * I am aware that Epicureans accepted gods as Buddhists accepted gods, but on a philosophical level these were not supernatural gods, but rather reducible down to atomic units just as man was.