Text Messages Guide a Doctor Through Surgery in the Congo 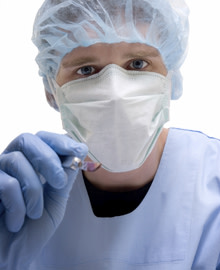 Kudos to technology! A British surgeon volunteering in the Democratic Republic of Congo performed a complicated shoulder amputation by following text messages from a colleague in London. Dr. David Nott had never before performed a forequarter amputation, a procedure done only about ten times a year in the U.K. and requiring the removal of the shoulder blade and clavicle. His patient was a 16-year-old boy whose left arm had been ripped off and was developing a dangerous infection. Nott knew it was a do or die situation. So he texted Professor Meirion Thomas, a colleague in London who had performed the surgery before. Thomas texted back step-by-step instructions, explaining where to make the incisions and how to divide major nerves and arteries. The text instructions ended with "Easy! Good luck." Despite having only one pint of replacement blood and no intensive care unit in the tiny African hospital, Nott pulled off the surgery using the how-to texts, and the boy has since made a complete recovery. "It was touch and go whether he would make it so when I saw his face on the [Medecins Sans Frontieres] website afterwards, it was a real delight," Nott said. Related Content: DB: Text Messaging: The New Way to Track ElephantsImage: iStockphoto