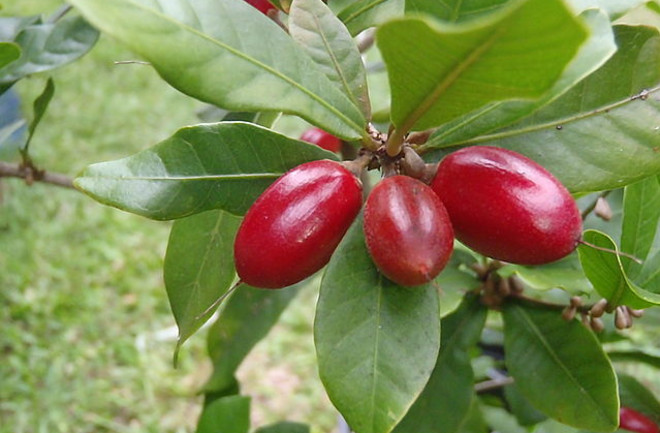 Miracle Berries (Wikimedia Commons) Imagine eating a lemon and puckering to incredibly sour...no wait, incrediblysweet citrus syrup. Then you try some tart goat cheese, but to your surprise, it tastes like sugary frosting. An underripe pineapple? Better than candy. Salt and vinegar chips? Dessert! This fantastical taste-changing sensation is the real-life effect of a West African fruit called Synsepalum dulcificum (Richardella Dulcifica), or the “miracle berry”, which physically alters taste receptors and causes sour foods to taste sweet. How does this work? The secret is a protein found in miracle berries called miraculin.

Miraculin Protein (Wikimedia Commons) When a miracle berry is eaten, its molecules attach to the thousands of taste receptor cells located on taste buds lining the mouth, tongue, throat, and esophagus. Humans have at least five different kinds of taste receptors to detect five basic tastes: sweet, salty, sour, bitter, and umami. (Note that evidence in the last decade suggests that there may be additional taste receptors for lipids [1] – which may explain our natural affinity for fatty foods!) Miraculin, in particular, binds directly to the sweet-sensing taste receptor known as hT1R2-hT1R3. The earliest scheme of miraculin-hT1R2-hT1R3 binding was based on a pH-dependent conformational change of the sweet receptor-protein complex. In this model, miraculin binds somewhere near the sweet receptor site (so there is no sweet taste at first), but at a lower pH (in sour or acidic environments), the receptor changes its shape so that miraculin can bind directly on the sweet receptor site and elicits a sweet taste [2]. That's how miraculin causes a lemon, which creates a sour, acidic environment in your mouth, to taste so sweet!

More recent studies have found additional evidence that miraculin actually starts off directly attached to sweet receptor hT1R2-hT1R3 in neutral pH and activates it in the same place in an acidic environment. Experiments have shown that sweet receptors bound with miraculin are most responsive in acidic pH (4.8-6.5), but in general, the more sour environments lead to a greater intensity of sweet taste sensation [2]. In neutral pH (when miraculin is not activating the sweet receptors), miraculin actually has another effect: it blocks other sweeteners such as aspartame, sucrose, and saccharin, and other sweetness-inducing proteins like thaumatic and brazzein, from attaching to the hT1R2-hT1R3 receptor. Basically, miraculin claims the sweet receptor site for itself so that it can reactivate the site, allowing the magical sensations of sweetness to last for up to an hour.

Even if miraculin can manipulate sweet taste receptors to make a lemon taste sweet, shouldn't a lemon still taste sour? Little is currently known about whether or not miraculin actually inhibits sour taste receptors, but a neuroimaging study in 2006 has suggested that the electrical signals that transmit sour taste information diminish en route to the brain stem, and that only sweet taste signals even reach the brain for processing. In the study, participants were able to still detect both citric acid and sucrose after miraculin treatment, but the sweet taste dominated because 20% of the sourness may be suppressed at the receptor level, and most of it is suppressed in the central nervous system [3]. Miracle berries were historically used by West Africans to improve the taste of fermented bread and sour palm wine, but today's applications may be life-changing. Miraculin is being studied as a therapy for chemotherapy patients suffering from dysgeusia, which is an unpleasant metallic taste distortion. In a 2012 pilot study, eight chemotherapy patients, who reported that most foods, including water, tasted metallic, bitter, or “spoiled”, were recruited to test the effects of miracle berries. After eating miracle berries for two weeks, patients showed substantial improvement in appetite, nutrition, and response to treatment because the miraculin either masked or eliminated the unpleasant tastes altogether [4]. In the meantime, expect to see an increased production of recombinant miraculin in transgenic fruits, booming commercial demand for miracle berries as low-calorie sweeteners, and some invites to trendy “taste tripping” miracle berry parties. References

Eunice Liu is studying Neuroscience and Linguistics at UCLA. She attributes her love of food science to an obsession with watching bread rise in the oven. Read more by Eunice Liu