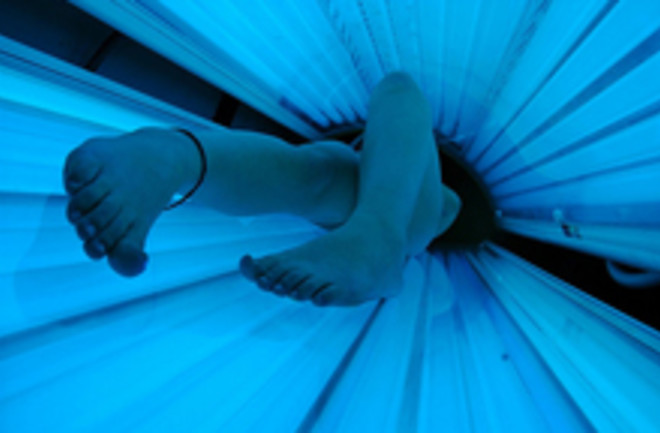 An international health agency has officially ruled that tanning beds pose as likely to cause cancer as cigarettes, asbestos, and arsenic. The International Agency for Research on Cancer (IARC) moved ultraviolet-emitting tanning beds from the category of "probably carcinogenic" to definitely "carcinogenic to humans."

The IARC is an expert committee that makes recommendations to the World Health Organization. It made its decision following a review of research which concluded that the risk of melanoma - the most deadly form of skin cancer - was increased by 75% in people who started using sunbeds regularly before the age of 30. In addition, several studies have linked sunbed use to a raised risk of melanoma of the eye [BBC News].

The study results and the new classification were published in the journal Lancet Oncology, and experts say the findings are likely to prompt calls for stricter regulations of tanning salons.

Melanoma originates in a type of skin cells called melanocytes that make skin tan or brown and protect the deeper layer from the sun, according to the American Cancer Society [Bloomberg].

Cases of melanoma are on the rise in the United States, particularly among young women.

A separate study reported last July by researchers from the National Institutes of Health found that melanoma rates among young women in the United States almost tripled between 1973 and 2004 [WebMD].

The study also refuted the theory, long presented by the indoor tanning industry, that tanning beds are safe because their bulbs emit more ultraviolet A (UVA) radiation than ultraviolet B (UVB). Says Len Lichtenfeld, a doctor with the American Cancer Society:

“This report puts to rest the argument that tanning with UVA light is safe.... As noted by the IARC report, UVA light is also a class I carcinogen and should be avoided” [WebMD].

However, indoor tanning association spokespeople still maintain that tanning beds are not dangerous when used properly. Related Content: 80beats: With Help, a Patient’s Own Immune System Fights off Skin Cancer DISCOVER: The Truth About McCain's Melanoma: He Faces a Very Low Risk DISCOVER: Outrunning Melanoma DISCOVER: The Biology of... Sunscreen