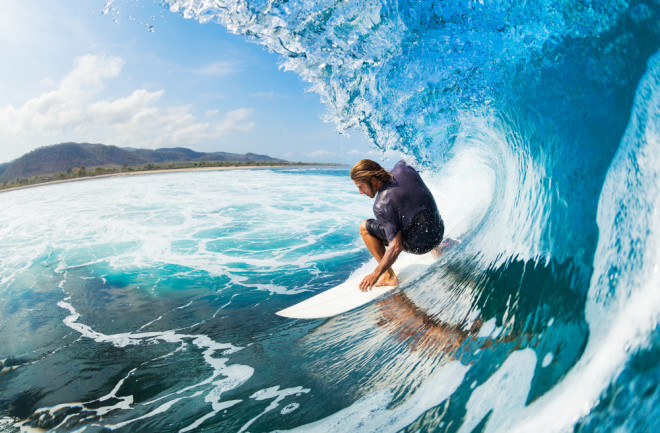 (Credit: EpicStockMedia/Shutterstock) British surfers are coming back from the beach with more than good vibes. A study from University of Exeter researchers found the surfers had levels of antibiotic-resistant bacteria that were three times higher than those who didn't hang ten. It's likely the result of ingesting seawater laden with bacteria from sewage and run-off, they say, and it's another sign of the impending health crisis such bacteria could represent.

The researchers looked at just under 300 people from the United Kingdom, half of whom were regular surfers, and half who didn't spend much time in the water. They had them perform rectal swabs on themselves and send the evidence to the lab to test for antibiotic-resistant E. coli bacteria. The researchers were looking for resistance to two broad-spectrum antibiotics, cefotaxime and meropenem, as well as genes that are commonly associated with resistance in these bacteria. They published their findings Monday in the journal Environment International. While just 3 percent of the controls had E. coli that tested positive for resistance, that number rose to 9 percent among the surfers, or a three-fold increase. While that's a significant jump, it doesn't mean that the surfers were necessarily more sickly than the rest of the participants. Antibiotic-resistant bacteria aren't necessarily any better at causing infections, it's just harder to treat them when they do occur. Our bodies harbor millions of bacteria, some portion of which are harmful, all the time, and they don't usually proliferate enough to make us sick.

The rise of antibiotic resistance is worrying, however, because we rely on antibiotics to treat many diseases that were once life-threatening. Modern medicine changed that, but it's at risk of being undone. The culprit here is mother nature herself — bacteria do their best to survive just like the rest of us do, and evolution has begun favoring genetic mutations that render antibiotics useless. Over-prescribing and misusing antibiotics has of course made the problem much worse, however. The issue caused a stir in the US in 2016 when a woman in Pennsylvania was diagnosed with a urinary tract infection caused by bacteria resistant to one of the few drugs that could still combat antibiotic-resistant bacteria, colistin. That particular drug is widely used in food production in China, something that likely contributed to the rise of bacteria resistant to it.

Catching the Big One

Exactly where the bacteria in the UK got their resistance from is unknown, but it is clear that they're prevalent in the waters surrounding the country. After taking samples of seawater from 97 popular swimming locations around the country, researchers found 15 percent of them contained bacteria resistant to cefotaxime. Despite efforts to ensure that seawater remains uncontaminated, dangerous bacteria are still making their way into the water, they say. It's not just surfers at risk, either. Even if they don't get sick, surfers risk spreading the resistant bacteria to others in their communities, including those most at risk of infections like children and the elderly. What's more, the bacteria themselves could be spreading resistance, through a process called horizontal gene transfer. Bacteria are able to shuffle genes amongst themselves, and resistance could spread in this way as well. Though sharks may seem the most potent threat surfers and other ocean-goers face, our real foes may be far too small to even see.