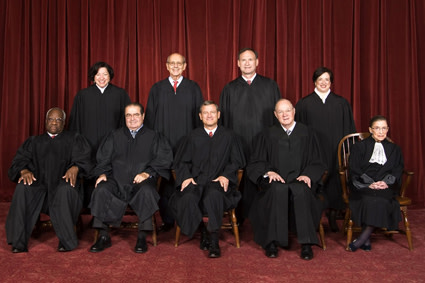 If a vaccine injures a child, should the parents be allowed to sue in state court? That's a question lawyers, vaccine makers, parents, and Congress have wrestled over for a quarter century. This week, the United States Supreme Court brought forth a ruling that keeps the status quo: No, you can't.

The justices, voting 6-2, said a 1986 federal law preempts claims that a drugmaker should have sold a safer formulation of a vaccine. The law, designed to encourage vaccine production by limiting patient suits, channels most complaints into a company- financed no-fault system that offers limited but guaranteed payments for injuries shown to be caused by a product. [Bloomberg]

The case in question, which has been kicking around for nearly two decades, was brought by Russell and Robalee Bruesewitz on behalf of their daughter, Hannah. In 1992 she began experiencing seizures after receiving a diphtheria, pertussis and tetanus shot

made by Wyeth [part of Pfizer]. At the time, her parents tried to file a claim with that government-created system.

When a special Vaccine Court within the Court of Federal Claims ruled that her injuries couldn't be linked with the vaccine, her parents tried to move the case to Pennsylvania state court. The Third Circuit Court of Appeals eventually ruled that the claim was pre-empted by federal law, a decision upheld by the Supreme Court. [Wall Street Journal]

Hannah has what's called "residual seizure disorder." Under the original setup of the government's claims clearinghouse, she would have been covered no-questions-asked: Because of the difficulty in showing that a vaccine directly caused an injury, the government simply created a table of conditions that would be covered.

But in March 1995—a month before her family filed their claim—a special government advisory committee gave the injury table a radical overhaul. Under the new system, residual seizure disorder no longer qualified a child for compensation. Instead, Hannah's family needed to prove that the vaccine caused her injury, and they were unable to do so. [Slate]

Justice Scalia and the other five voting in the majority cited the original intent of the 1986 law: It exists so that a flood of lawsuits—many perhaps frivolous—can't create a public health crisis by impeding vaccine production.

Kathleen Sullivan, who represented Wyeth in the case before the court, told justices that ruling against the company could lead to thousands of lawsuits in which parents claim, for instance, that the mumps, measles and rubella vaccine played a role in their children's autism. [Washington Post]

Justices Sotomayor and Ginsburg, however, argued in their dissent that by shielding drugmakers from lawsuits, what the government is actually doing is removing the pressure to create better and safer vaccines. Related Content: 80beats: BMJ: Vaccine-Autism Researcher Andrew Wakefield Is a “Fraud”

DISCOVER: Why Does the Vaccine/Autism Controversy Live On?