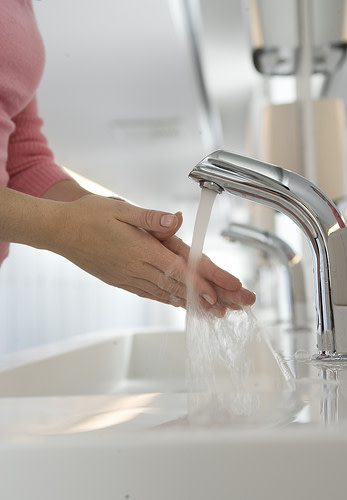 The war between people and disease-causing pathogens is old as humanity itself. This has helped shaped our so-called behavioral immunity, which can lead us, for example, to automatically avoid people who are visibly sick. But it can also misfire; previous studies have shown that people with compromised immune systems (due to a recent illness), and even people who describe themselves as afraid of germs or susceptible to disease, are more likely to avoid and feel prejudiced toward otherwise healthy people who merely look different than them, like foreigners or immigrants. It appears this prejudice can be reduced or erased by public health measures like vaccination or the simple act of washing your hands, according to a recent study in Psychological Science. In the study's first experiment, conducted at the height of the 2009 H1N1 swine flu, researchers gathered a group of participants, some of whom had already received a vaccine against H1N1. They were then randomly broken into two groups, which I'll call group A and group B (each had roughly equal numbers of vaccinated and non-vaccinated people). Group A read news articles describing the flu's health effects and the vaccine's effectiveness, in order to remind or "prime" them to the threat posed by the virus. Group B read no such articles. All participants then took a test that measures prejudicial attitudes towards immigrants. In group A, unvaccinated people were more prejudiced against immigrants than those who had received the vaccine. In the "unprimed" group B, there was no measurable difference. The researchers conducted a second experiment on vaccinated people. Half read a description of the vaccine's effectiveness; then they all filled out a survey gauging prejudice toward immigrants and other so-called "out-groups" like obese people, crack addicts, and the homeless. Those who did the reading showed a significantly lower level of prejudice. "Even when everyone is actually protected, the perception that they are well-protected attenuates prejudice," said researcher Julie Huang. Researchers showed a similar result with hand-washing. In a third experiment, half the participants washed their hands with antimicrobial cleanser and half didn't. After reading a passage explaining how hand-washing reduces the spread of disease, people filled out a survey similar to that in experiment 2. Those with unwashed hands were significantly more prejudiced toward outsiders than those who had washed up. Reference: Julie Y. Huang, Alexandra Sedlovskaya, Joshua M. Ackerman, and John A. Bargh. Immunizing Against Prejudice: Effects of Disease Protection on Attitudes Toward Out-Groups. Psychological Science (OnlineFirst, published November 2011). DOI: 10.1177/0956797611417261

The Top Scientific Breakthrough of 2020: Understanding SARS-CoV-2 — and Then Developing Multiple Vaccines